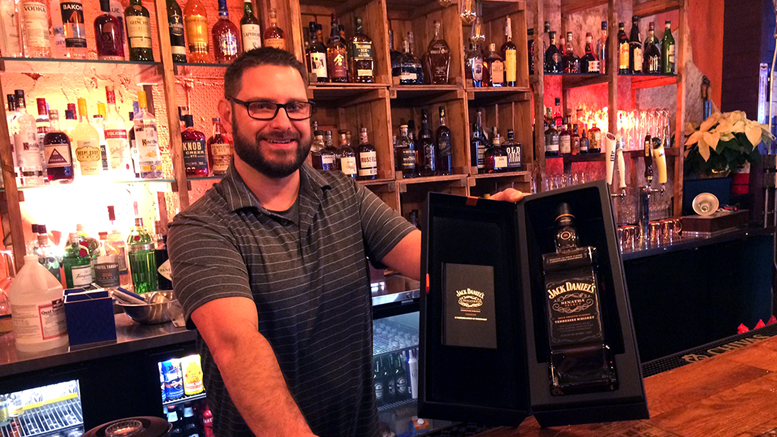 Muncie, Indiana—If you’ve been waiting, the meat cleaver door handle to Ron Lahody’s Steak House (Motto: Trust Your Butcher) will be getting a workout starting today.

We snuck in with our buddy George Bennett for an early look the other day. Workers were scurrying to get it ready. Ron, owner of Lahody’s Meats, was manning a caulking gun in a utility closet. Two other hefty guys were straining to lift what looked to be a restaurant-sized bread mixer into place.

So what’s on the menu?

Appetizers include Becky’s Seared Tuna and 5-Cheese Lobster Mac, both at $18. Salads include Pauline’s Cucumber Salad. As you might expect, though, meat takes the lead in this butcher’s business.

Want a good old Indiana breaded tenderloin? It’s $12. Just $10 will buy you a 10-ounce Angus beef burger, plus one extra buck to add bacon, a fried egg or cheese. There’s seafood, too, with crab linguine for $29, and grilled salmon for $33.

Meanwhile, there is a variety of sides, and kids’ meals offered in the place, too.

Speaking of “place,” the up-and-coming eatery looked fine, from the Christmas tree decorated by George’s wife and daughter, Dondra and Bethany, to the shiny tubing overhead, to the bar. Stocked on four levels, there was no lack of liquor, with vodka, gin, tequila and plenty of bourbon, including a cubby filled with Hoosier products. In a nearby corner was a large wine collection overlooking a keyboard that, George explained, played automatically, sort of a modern take on your old player piano.

The bar itself glistened, and was imbedded with newspaper advertisements for the old Lahody and Son Meat Market up in Gaston. A nice touch, it was a reminder of a time when “lean family steak” would cost you 75 cents a pound.

One offering will be the last drink served on the Titanic. “It was the sixth course of the last first-class dinner,” he explained, noting it’s a mixture of champagne, white rum, simple syrup, lemon juice and orange juice.

He also noted they stocked Templeton Rye, Al Capone’s go-to drink. In the cooler underneath it, fittingly, were cans of Bada Bing cherries, somehow in keeping with Capone’s mobster image.

There was also a bottle of special Jack Daniels whiskey, made to mark Frank Sinatra’s 50-year friendship with the distillery. It was Old Blue Eyes’ special recipe.