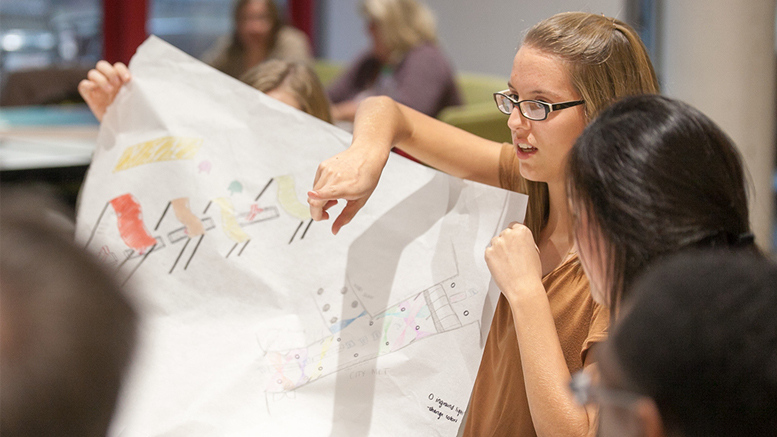 Muncie, Indiana—Muncie Central High School senior Chandler Clevenger’s goal of graduating with a technical honors diploma was at risk for reasons beyond his control.

To earn the diploma, he needed to pass a class this fall through Project Lead The Way (PLTW), an Indianapolis-based, nonprofit K-12 program to encourage and prepare young people across the U.S. with an interest in STEM fields such as computer science, engineering, and biomedicine.

For a while, however, Central did not have a faculty member with the technical training and time to continue PLTW at the school. Principal Chris Walker, ’03, worried the school was on the verge of losing a valuable STEM (science, technology, engineering, and math) program.

Clevenger was among many students whose education would be affected.

Was there any way Ball State could help?

Lining up the dominoes

Multiple teachers, special training, and hours of commitment were required. But if you think of those as a row of dominoes rather than a series of roadblocks, you can envision how Weaver set the complex project in motion.

Back at the office, he approached Anita Welch, associate dean of Teachers College, to brainstorm. In a stroke of good luck, Welch taught PTLW in Kansas high schools earlier in her career and quickly understood what was needed.

“Her background was a critically important part of this,” Weaver said.

Associate Professor Richard Seymour, MA ’82, who teaches technology education at Ball State, and Krista Stith, director of the Center of Gifted Studies and Talent Development, rounded out the team. Stith volunteered to spend two weeks in Michigan learning to teach the curriculum before classes began in the fall.

Meanwhile, across town, Edwards drafted paperwork to formalize the unusual teaching arrangements. While both Seymour and Stith hold doctoral degrees, they weren’t licensed as high school teachers. So, Walker found an instructional assistant, Ann Donovan, to help in the classrooms. Randy Glaze, ’83 MA ’88, a longtime PLTW teacher at nearby Delta High School, was able to instruct the new instructors about which aspects of the curriculum would take the most time and provide the biggest challenges for students.

Weaver found himself in another serendipitous meeting, this time with an old friend, Dave Ferguson, interim dean of the College of Architecture and Planning (CAP). As the two talked over coffee, Ferguson mentioned that CAP faculty and staff had begun visiting high schools that use PLTW curriculum to talk to students about college majors in architecture, construction management, urban planning, and landscape architecture.

Weaver had needed one more teacher, someone with a design background like CAP teaches. Ferguson’s offhand comment gave Weaver the momentum to push over the last domino in the row.

Ferguson turned to Lori Pence, CAP’s senior manager of student support services, for suggestions. She knew that Noah Donica, ’93, who graduated in Spring 2018 with a major in architecture, would be perfect for the job. Donica had helped with CAP’s DesignWorks summer resident workshop for high schoolers. As a bonus, he’d also been involved in Project Lead the Way in high school.

Donica had just begun his first full-time job six weeks earlier at MartinRiley, an architecture and engineering firm in Fort Wayne. When he heard Pence’s voicemail message asking if he would be interested in teaching a PLTW design class at Central, he knew he wanted to do it.

He wasn’t sure how to approach his boss with such a request. His mom encouraged him to try, though, and his supervisors already knew of his interest in teaching, so he risked it.

“They’ve been really great,” Donica said about his bosses. “They let me work an alternative schedule, and it works out since I’m co-running my own projects right now.”

Partly because Central students had expected Project Lead the Way classes to be canceled, enrollment is low this year. Principal Walker and others are hopeful, however, that the momentum can be turned around.

An example of partnership

“It’s really been tremendous the way Ball State stepped up and helped us out,” Walker said. “It’s an example of something that wouldn’t have happened without the new partnership between the University and Muncie schools.”

A partnership has long existed, of course, but deeper bonds have been forged over the past year after President Geoffrey S. Mearns made the local school district’s success a priority. Muncie Community Schools had spent a year under state control, but legislators agreed with University leaders that a local approach would be beneficial. Ball State’s Board of Trustees approved, and the entities formalized their new relationship over the summer.

Since then, more than 350 Ball State faculty, staff, and students volunteered to help the schools from mid-July to mid-October, and the University has led efforts to raise $3.2 million in private funds for school needs, including $50,000 for classroom supplies.

The revival of Project Lead The Way this fall was a relief for Clevenger.

He and another Muncie Central student are designing houses for each other as an assignment in Donica’s class. They are using Habitat for Humanity’s specifications which require that the doorways are wide enough to allow wheelchair access, and they are including other elements that fit each other’s needs and hobbies. Both teens are college bound and say architecture and computer sciences are potential majors.

Ferguson, the interim dean of CAP, says letting students explore technical skills in high school is an important part of helping them find career paths that suit their interests and talents.

“Project Lead The Way is a wonderful window to a career in design and construction,” he said. “I’m glad we could play a part in helping to keep the program running for another year and creating a powerful partnership that has a great future.”

Vince Bertram, president and chief executive officer of Project Lead The Way, will speak at 7 p.m., Dec. 12, in the Fine Arts Building Recital Hall as part of the Teachers College Centennial events schedule.

Bertram is a Henry County native who earned his bachelor’s, master’s, EdS, and EdD from Ball State. He is the recipient of the 2015 Teachers College Outstanding Alumni Award and in 2017 was honored with the Ball State University Alumni Association’s Distinguished Alumni Award, the highest award bestowed on an alumnus by the Alumni Association.