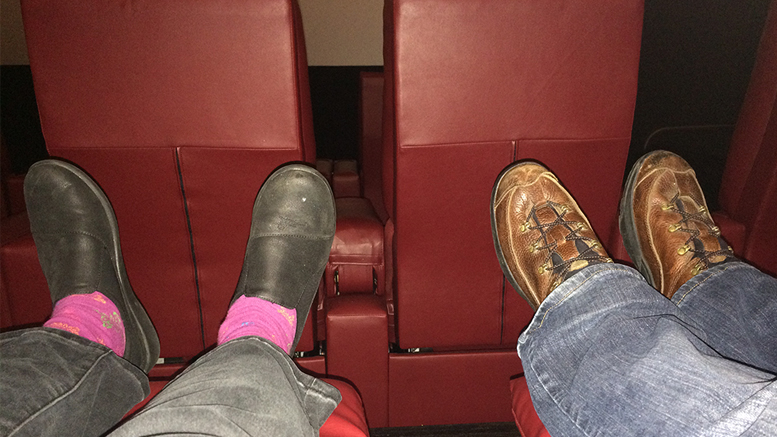 The view from our comfy movie-theater recliners. Photo by: Nancy Carlson

Back in my formative years, going to movies was not a big part of my life.

This was because we were Baptists, very conservative Baptists. Supporting Hollywood and its lewd, sinful, lascivious ways was a no-no.

Nevertheless, against all odds, I somehow managed to see two movies as a kid. One was “Sink the Bismarck.” The other was “Darby O’Gill and the Little People.” Beats me how this happened, but the screaming banshees in the latter made me wish I’d stayed home with a pillow over my head. By the same token, “Sink the Bismarck” did nothing to allay my childhood phobias about being blown to pieces  and having my giblets eaten by sharks.

Years later, vacationing two hundred miles from our hometown, my family chanced attending that perfidious flick, “Camelot.” Those two-and-a-half hours of crushing immorality were deliciously sinful and exciting for us. Still, Dad kept looking over his shoulder to make sure our church’s Board of Deacons – of which he happened to be chairman – didn’t bust in to haul our butts out.

My true movie trauma, though, happened the year before when I begged to go see “The Blue Max.” I was already a totally addicted airplane nut, and “The Blue Max” was about German fliers in World War One. A fantastic flying movie, it featured a bunch of Fokker Dr.1 Triplanes that somehow had been assembled for the air-to-air combat scenes. It also featured super-hot actress Ursula Andress, who my buddies and I, in our adolescent hormonal rages, appreciatively referred to as Ursula Undressed. But really, what I wanted to see were those Fokkers, with an occasional peek at Ursula’s undies.

From the start, though, it was a no-go.

“But why not?” I insisted. Dad patiently explained, and I quote, “Because people who love Jesus don’t go to movies.” Naturally, being a smart-ass kid, my first thought was to reply, “Well, can I go see ‘The Blue Max’ if I just like Jesus a whole bunch?”

Luckily for me, I kept my mouth shut.

Anyway, the day eventually came when I could see all the movies I wanted, and there were years when Nancy and I saw lots of them. More recently, however, we had pretty much quit. So when we started going again, the experience came as a shock.

I’d heard enticing rumors that you could now get a beer at the movies, and even use that beer to wash down a hotdog. I scarcely believed it, though. But sure enough, walking in, I spotted the theater’s bar. Now, as a late convert to Lutheranism, I had nothing against bars, and even vaguely recalled being inside one once. So I guessed beer in theaters was okay. On the other hand, I tried to imagine it way back in the day. Sitting through “2001: A Space Odyssey” with its dizzying, kaleidoscopic, visual effects, how would I have reacted with two quarts of Old Milwaukee sloshing around inside me? Frankly, there was a good chance I would have tossed more than un-popped kernels into my popcorn bucket. But then I saw the theater bar had a Sam Adams seasonal on tap, and my doubts flew out the flippin’ window. That brew was worth the risk.

But hey, we were in good old Muncie.

OK, that’s a lie. I didn’t really. That is just my lowlife imagination at work. Far as I know, I was the only involuntary pleasure-moaner in the place. But I guarantee you, if I had a recliner that comfortable at home, I would get way more than the scant fifteen hours of sleep I manage to snatch each day.

Anyway, with all these improvements, Muncie’s AMC 12 theater is really something. Also really something, by the way, is “First Man,” starring Ryan Gosling and Claire Foy. It’s the story of Neil Armstrong, first man on the moon, and one whose bravery was the equal of any other American hero you can name.

Telling a story like his is what great movie theaters are made for.