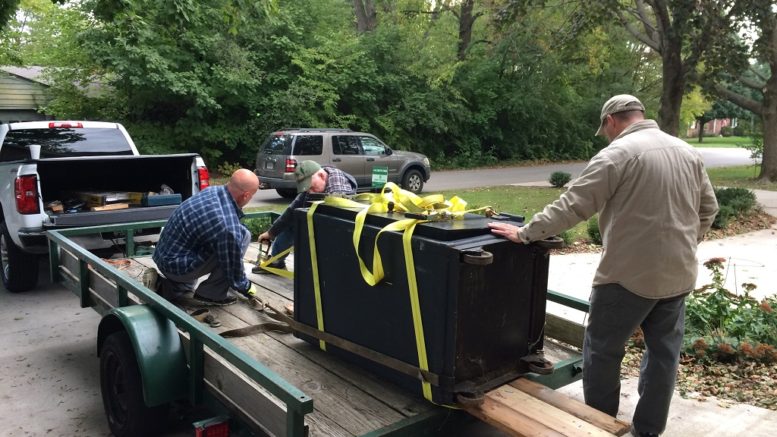 Shannon (left to right), William and Chris load up the safe. Photo by: Nancy Carlson

So Nancy and I had this problem. The problem was, my “man cave” had a closet in it, but totally filling that closet space was a mammoth safe.

Black as coal, this empty old safe stood chest high, thirty-odd inches across and roughly the same length deep. Pushing against it felt like pushing against Mount Rushmore. Why anybody wedged that  safe into my man cave’s closet was beyond me. For all I knew the closet, and maybe even the house, had been built around it.

One thing was obvious, though. Were it to be picked up by an F5 tornado and dropped directly atop  Nancy and me in the middle of the night, we’d have been hurtin’ for certain. All anybody would find of us would be two smear spots. One smear spot would be mostly composed of herbal tea and rice cakes. The other smear spot would be composed of moonshine, Hostess Ho-Ho’s and assorted Pizza King toppings.

I’ll let you guess which smear spot would be me.

Anyway, when Nancy had her new kitchen put in last summer, we met the aptly-named father-son team of William and Chris Armstrong. They turned out to be two of the most competent people we know. Shown the safe, a glint lit William’s eye. That’s why two weeks ago, early on a Wednesday morning, they came to yank that safe from the closet. This had been tried before, to no avail. But in no time, going through our garage, they had taken out the back wall of that closet, moved the safe – which Chris guessed weighed about 1,500 pounds – into our garage, then re-built the wall.

That evening, making a rare visit to The Fickle Peach, I told my buddies, “… and get this! They did that in the same amount of time it took Nancy and me to change a toilet seat!” Boy, did that line get some laughs. What I didn’t mention to them was, I wasn’t kidding.

So now, the safe was out of our house and in our garage. But we didn’t really want it in our garage, either. Consequently, two days later, William and Chris, accompanied by their equally competent friend Shannon Lawrence, showed up to load the safe onto a trailer for removal. That trailer, they told me, would haul the safe south to where a friend of William, a fellow who runs a sort of winery/meat processing shop, wanted it.

Here’s the part of this column where I’m going to get serious. Modern Americans have mastered all sorts of skills these days. The ability to grasp and monetize complicated concepts. Crunching numbers. Making computers compute. Messing with words, spoken or written. Inventing recipes. Banking. Flying airliners. Driving trucks. The list goes on.

But what never fails to impress me is encountering inventive people with physical skills who can just plain work. Watching as William, Chris and Shannon maneuvered that big honking safe onto that trailer flat-out humbled me. This was because there was no way on God’s green earth that I could have done that. Not and lived, anyway.

After securing two-by-four and two-by-six boards to one side of the safe, William backed his trailer to within a foot of it, another skill I totally lack. Having wrapped it all with heavy-duty straps, the three men  laboriously tipped the safe until it was leaning against the trailer. Then they began hand-winching it farther on board, inch by stubborn inch. Throughout the process they adjusted the straps and adjusted the winches, and when necessary, they put their backs into it and pushed. Ever so slowly, that safe slid up to the trailer’s center of gravity over the axle. When it was finally positioned, they leaned on a crowbar to free the planks from underneath it.

At its next and possibly final destination, I was relieved to learn, it would be unloaded by a piece of heavy equipment.

Meanwhile, I watched half-amazed (only half-amazed, because I had no doubt those guys would complete the job) from the comfort of a nearby folding chair. Watching, I regretted – but only sort of regretted – that due to several issues, my own laboring days are long gone.

With it loaded, the three working men left, but not before William gifted me with a bulging plastic bag of venison he had turned into some darned tasty jerky. Yeah, he does that, too, plus builds first-class furniture.

Watching as those three guys drove away, all I could think was this: Considering the range of different work skills necessary to keep America up and running, we’re very lucky so many people have acquired them. Unfortunately, I can’t escape a sneaking suspicion that, at least in some circles, the basic American working man and woman aren’t regarded with the same respect that they once were, and the respect they are undeniably due.

But the people who settled our country, building its cities, dams, canals and highways, and the people who will be relied upon to advance us on this fortuitous course, are still here. They were and are folks with equal measures of brains and brawn, and the ability to employ both, people like William, Chris and Shannon.