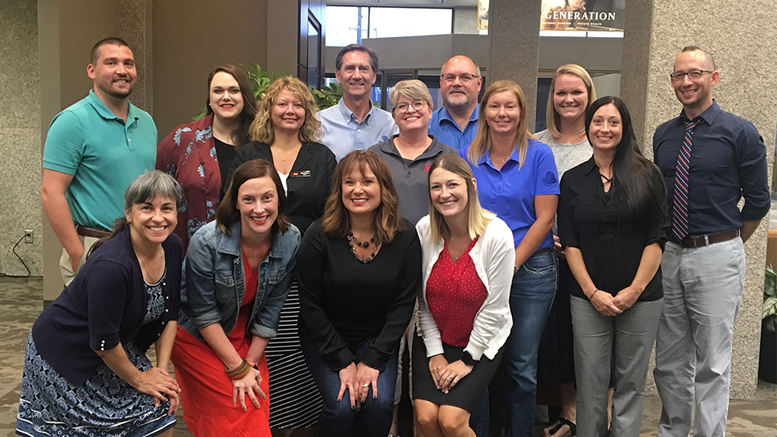 Muncie, IN—A growing group of young, ambitious early-career professionals are among today’s foot soldiers of the Loaned Executives program, a longtime component of the annual fundraising campaign for United Way of Delaware County but one that had waned over the years.

These are the men and women whose job is to make the ask.

Once the domain of community stalwarts, the last two years has birthed a new generation of United Way pitch men and women – many of whom are new to United Way. They meet with company CEOs and small business owners to tell the United Way story.

It’s a generational problem that United Way has taken aim at through its support of early childhood education, specifically programs that increase third-grade level reading attainment, a key benchmark for success later in life.

As grim as those statistics may sound, the money raised for United Way supports 28 programs raise money for 26 non-profits throughout the county that have a tie to the central goal of ending generational poverty.

“Fundraising is a huge part of every occupational landscape,” said McCauliff. “The loaned executives program is a great place to explore and stretch. It’s awesome to just bring so many creative professionals together.”

The skills the “LEs,” as they are called, learn in a series of workshops not only will benefit the United Way fundraising campaign but the loaned executives will return to their employers with sharpened skills and more focus about who they are and what they can achieve when they have a purpose in mind.

It is that “power of purpose” that one presenter, Wil Davis, co-founder of Ontario Systems and now President of Ball State’s Innovation Corp., used to inspire the loaned executives.

Davis, who also is founder and principal for his consultant company, Noble Why, helps organizations foster passionate, purposeful, and productive cultures – a Cultures of Excellence – where there is both an individual and collective pride in the work being accomplished.

“It is about living intentionally,” said Stanley, Davis’ daughter. “Are you doing things on purpose and finding those things you are passionate about, then aligning your life around those things.”

Such intention is what ultimately will bring positive change to the community, she said.

“Our two major goals this year,” says Stanley, “is to take the momentum from last year and keep it moving forward. We want to build on what’s been done.”

United Way surpassed its goal by nearly 20 percent, raising $1.4 million last year. This year’s goal is expected to be announced in September. “Our second goal is a new element. We want the loaned executives to network with each other, build relationships and work collaboratively.”

That’s why after every training session, there’s a happy hour in a local pub or brewery.

Jeff Lang, the 2018 campaign chair, says his first foray into community life in Muncie when he moved here in the ‘90s was as a loaned executive.

The connections made then paid off later. His networking benefited the community but it also benefited himself, personally.

“United Way is solving problems with a depth and breadth that not everyone knows about,” Stanley said.

United Way of Delaware County, Indiana engages the community to improve lives by focusing resources on education, health, and financial stability. The nonprofit fights to create lasting change in community conditions. As the sponsoring organization for the community’s Campaign for Grade-Level Reading, United Way works to help children read at or above grade level by the end of their third-grade year. It is during this critical time that children transition from learning how to read, into being students who read to learn in order to be successful in school and life. United Way strategically invests in local programs that provide services that contribute to children’s success with reading and ultimately aim to end generational poverty in Delaware County. Learn more at invitedtoliveunited.org.