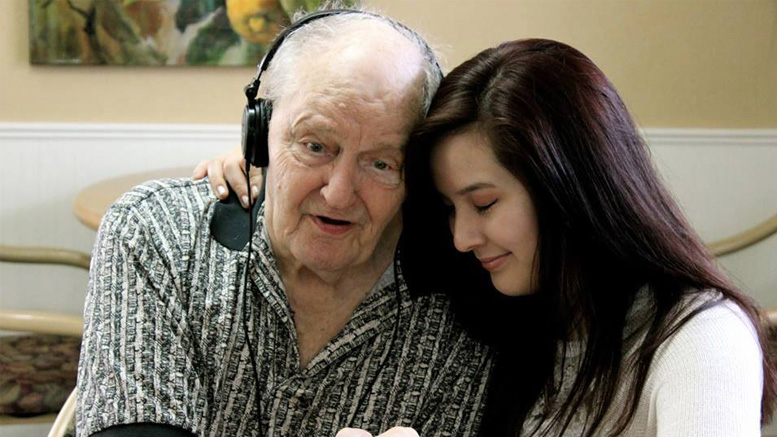 The program is called “Music and Memory” and their mission is to bring iPods® and individualized music playlists to the elderly, with special emphasis on those suffering from dementia and Alzheimer’s.

We believe that personalized digital music can greatly enhance the quality of life for many nursing home residents, especially those with cognitive disorders. We are also deeply committed to bringing love, mercy, and compassion to Hoosier nursing home residents. We are affiliated with “Music & Memory,” a national non-profit 501c3 organization.”

If you love volunteering and working with the elderly, we hope you will join us and follow us online. Help us make a difference. Help spark the memories. Help make someone come alive again via personalized music.

We always appreciate donations. The 2GB iPod® Shuffles we prefer to use cost $49 each. We can also really use $25 iTunes® gift cards. Anyone who wants to help support our cause is encouraged to visit our GoFundMe page.

A brief history of “Music & Memory-Muncie” and its founding events

This is the story of how a small group of altruistic Ball State freshmen created a new BSU student service group determined to bring the “Music & Memory” initiative to Muncie, Ind., nursing homes.

The group was formed in September, 2013, by a dozen first-semester freshmen enrolled in a TCOM 101 course, who had viewed a short video in class about the New York-based “Music & Memory” initiative.

Inspired by the video in which a dementia patient named “Henry” comes alive via personalized music, the students made a commitment to bring the “Music & Memory” concept to a local nursing home by the end of their first academic year.

With hard work, they made it happen!

First, the freshmen organized a successful November, 2013, fundraising variety show, “A Night to Remember,” which was attended by hundreds of students.

The Pruis Hall show featured 11 BSU entertainment acts, representing a broad range of student organizations. The event set a record as the most successful community fundraiser in the national group’s history.

In January, 2014, the students conducted a successful week-long iPod® donation and fundraising drive in the AJ Atrium. Meanwhile, to raise even more money for the cause, they created a GoFundMe donation web site, which rapidly generated hundreds of dollars.

Making the vision a reality

By February, 2014, the freshmen were ready to purchase digital music equipment and take their initiative to a local nursing home, The Woodlands.

On February 9, 2014, they began their service work at the facility and have been visiting twice weekly ever since.

Within seven months, the hard-working freshmen developed their original vision, raised funds, and made their vision a reality.

Their observations and early successes were reported on several web sites and blogs.

It appears that the freshman created the first college student service group in the nation with the mission of bringing individualized music mixes via iPods to dementia patients.

Student volunteers on the first day of the personalized music outreach, February 9, 2014, at The Woodlands nursing home in Muncie.  In only a few months, the group established a national model for a new type of student service organization which gives volunteers a chance to work directly with dementia and Alzheimer’s patients using a new therapeutic approach.

In just a few months, several student volunteers qualified as accomplished ambassadors for the “Music & Memory” initiative. They can appear before any group and make a persuasive case for the cause. Plus, they can walk into any long-term care or Alzheimer’s facility in the nation and launch a personalized music outreach.

If you are an elder care provider, we urge you to contact us about bringing “Music & Memory” to your facility. We welcome your inquiries.

On Nov. 14, the group will have a fundraiser beginning at 7 pm inside Pruis Hall on the campus of Ball State University. There is a $3 admission for the variety show of consisting of music and dance.

Visit the music and memory Facebook page for more information

Dr. Joe Misiewicz, is a former professor and chairperson of the Department of Telecommunications at Ball State.