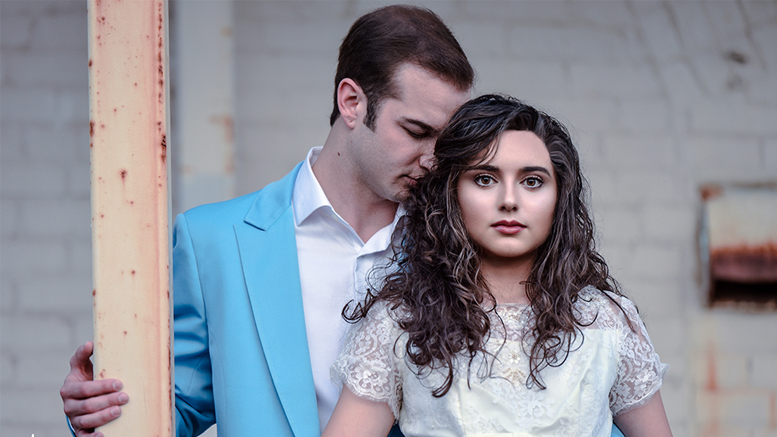 Photo by: Amanda Kishel of Kishel Photography. Maria and Tony are played by Matthew Kosin and Aiszah Rangel.

Muncie, IN—For Aiszah Rangel, playing “Maria” in Muncie Civic Theatre’s production of “West Side Story” is not just another role. It’s THE role.

“I wanted to play this role mainly because I am a Latina, and I know the Latino population here in Muncie is very small, “ she said.

She said this role allows her to represent Latina woman locally, and respectfully. “I hope to pave the way for other Latino artists,” she said. “Our voices deserve to be heard.”

Maria, Rangel said, is “more than just a young girl in love.”

“She is a strong young lady who fights for something she believes in – her love for Tony,” she said. “I think this is something that I’m bringing to the role that people don’t usually see in Maria. Yes, she is young, naive, and wondrous, but she is so much more as well.”

“She left behind the only world she had ever known and entered a new country, with a new language, and a new culture,” Rangel said. “Could you imagine loving someone that much? That is more than just naïveté, that’s an extraordinary and strong type of love. A different energy overcomes my abuela even when she talks about it now. She is a living version of Maria, and let me tell you, everything about that woman resembles strength.”

Dr. Michael O’Hara said signing on to direct the show was an easy “yes” because “this is one of the crown jewels of the Golden Age Broadway Musicals.”

“The DNA of this musical is without equal (other than ‘My Fair Lady’),” O’Hara, the Associate Dean of the College of Fine Arts at Ball State University, said. “The book was inspired by Shakespeare’s ‘Romeo and Juliet,’ and the music by one of the great masters of the 20th Century, Leonard Bernstein.”

He added that “the story, unfortunately, remains all too relevant.”

Casting this show was a challenge, O’Hara said, adding that the result was a blend of community members and students (both high school and Ball State).”

“We advertised for people of Latinx descent to audition, and we cast all four that showed up,” he said. “In the end, I deliberately crossed ethnic backgrounds to highlight the essential truth that tribalism afflicts all peoples.”

Choreographer Priscilla Ervin, the choreographer, has never been in a production of the show, but said it’s “definitely a bucket list show.”

“It is such an iconic dance show that I think at some point in their career, every dancer and/or choreographer has fantasized about tackling this show so I am thrilled to be part of this production,” she said.

Choreography has always been a a big part of this show. “When someone says ‘West Side Story,’ I think most people’s minds go straight to dance – the snaps (all the snaps), the head-roll/knee-swivel when Tony and Maria meet,” she said. “These are all synonymous with this show and, don’t fret, they all appear in this [one].”

Ervin said she wanted to pay “appropriate homage to the show’s original choreographer Jerome Robbins, “without ripping him off entirely.”

It’s a good time to be “West Side Story.” Celebrations all year are marking what would have been Robbins’ 100th birthday. Director Steven Spielberg is making a new version of the classic film, and it’s being revived on Broadway with new choreography in early 2020.

“So we got this show just in the nick of time,” Ervin said, adding that she and the rest of the production team have been planning the show since spring.

She said the dancing in the show has been a challenge but “this cast is just incredible and so, so talented and I can’t say enough good things about them and they fully embraced the challenge.”

“I think they thought I was going to make them dance until their legs fell off but they were also the ones to always ask to do the number one more time,” she said. “All of the hard work has paid off, though, and the end result is a truly beautiful show.  It really is special and it’s an incredibly humbling feeling to know that I’ve been able to be a small part of bringing this story to life.”

Rangel said she hopes audiences “see that hate gets us nowhere.” “Hating a group of people based on a stereotype will not solve anything in this world, it will only create more problems,” she said. “I hope more people are called to action to fight for what they believe in. Maria believed in her love for Tony, regardless of who he was and where he came from. For their love, walls didn’t exist. I hope that inspires others.”