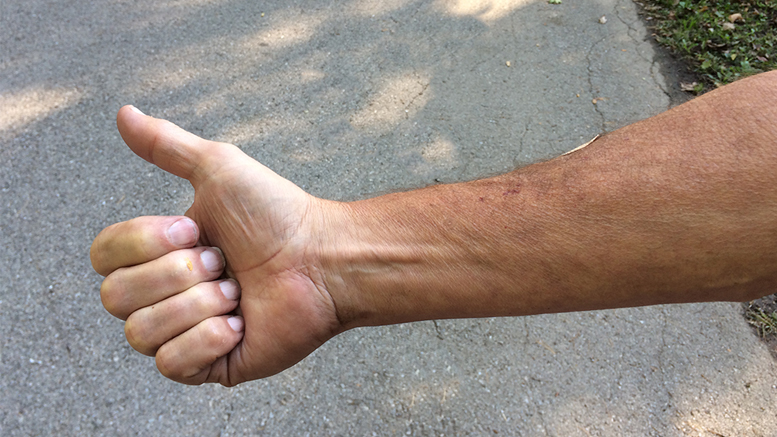 At one time this was a popular mode of travel. Photo by: Nancy Carlson

The other day I saw a dude hitchhiking, and it kind of took me by surprise.

You don’t see that many people hitchhiking these days. This is a good thing, I think, since America is half-crazy anymore, and most of the nut cases seem to own cars.

Back in the late 1960s and early 1970s, hitchhiking was far more common. Young people in search of peace, understanding and the answers to life’s deepest, most confounding questions, stuck out their thumbs and took to the road to find answers. I even did this myself.

The first time I was 19 and a student at Taylor University. I wasn’t searching for the meaning of life or anything, though. I needed to get home to northern Ohio for the flight test that would secure my private pilot’s license, which I’d been working in a foundry to finally complete. A buddy dropped me off at I-69. Probably seven hours later I was walking down good old Brandtson Avenue to my folks’ house, none the worse for wear.

The next time, my long-lost pal Charlie Friddell and I caught a lift with friends down to Indy’s Raceway Park. It was for a road race featuring stars like A.J. Foyt and the inimitable Lloyd Ruby, driving USAC stock cars. Afterward, needing to get back to school on our own, we wrote “Taylor U” on a piece of paper and were soon on our way. I guess the good Lord was watching out for us. Either that, or passing motorists who knew Taylor’s squeaky-clean reputation figured dorks like Charlie and I weren’t serial killers on the prowl.

The third time, though, I was looking for the meaning of life. Fed up with school, our stupidly hypocritical plastic society, and the fact that no matter how hard I scrubbed, my pimples wouldn’t go away, I headed out to save my sanity. I got another lift to the interstate. Not ten minutes later I was riding high in the cab of a semi. With a reflective look in my eyes and a Woody Guthrie traveling song playing in my head, I left to seek whatever truths life held for me, no matter how long it took to find them.

As things turned out, it was about twenty minutes later that I remembered, “Aw, crap! Tonight’s meatloaf night!” The fact was, Taylor’s cafeteria served some bodacious freaking meatloaf, and I was a shameless addict. I don’t remember if the full effect of the realization struck me right then. But later, I figured it probably didn’t bode well for my search for the meaning of life that, only 1,200 seconds into it, I was already worried about eating some meatloaf.

The thing is, I was too proud to tell that trucker I needed to head back for supper, so I just shut up and sat there. Five or six hours and several rides later it was dark and chilly, and I was still thirty miles short of my first stop on the road to fulfilling my destiny. This stop was actually the dorm of the Chicago-area private high school where my younger cousin Gary was a student.

Realizing that I could always continue searching for my destiny tomorrow, I called Gary on a pay phone and asked him to procure a car and pick me up.

Somehow, sleeping on the floor of Gary’s dorm room opened up a whole new world of possibilities for where I would hitchhike the following morning. I could go east, say, maybe to New York City, learn to play guitar and become a cultural icon like Bobby Dylan. I could head north, buy myself an axe and some thermal underpants, then become a mountain man in Alaska. I could even travel west and settle in San Francisco, intermingling with the hippies while opening my mind to the consciousness of the cosmos, then write stories for Rolling Stone magazine.

Still, a nagging thought in the back of my mind reminded me I could also head back south, return to Taylor University, and spend a couple years eating more meatloaf. As that day progressed, the meatloaf option began looking better and better. The thing was, how would I get there?

My mind kept returning to the year before, when I’d hitchhiked home to take that flight test. On that journey, I had never waited too long for a ride to show up. Still, I did wait long enough to know one thing: You didn’t have to spend much time standing out in the boonies, before you’d gladly hop into a car with Charles Manson behind the wheel and Lizzie Borden riding shotgun. There was nothing quite like being thirsty, hungry and desperately needing a toilet, all at the same time, to make you want to start moving again.

Now it looked like I had to hitchhike back to school …

I don’t remember if, as I prepared to return to Taylor that first time, I started sticking out my bottom lip and giving Mom the “sad puppy” look. Nevertheless, one thing soon became apparent to me. Dad would be fine with me hitchhiking back to Indiana. If he’d allowed that to happen, however, Mom would have scratched out his eyeballs. Thus it was that I soon found myself waving goodbye to them at Cleveland Hopkins Airport, boarding an airliner for Fort Wayne. In no time, it seemed, I was back in Indiana awaiting a lift to school, having spent the flight drinking all the whiskey sours the stewardess could pour me in a half-hour.

Now up there in Chicago, I realized two things. First, I had no pride. That meant I could easily bear the  humiliation of letting down my generation once again, by returning from this hitchhiking adventure in an airliner. Second, there was a blank check in my wallet that would buy me a ticket. Cousin Gary, exhibiting the personal skills that a few years later would result in him being an extremely successful businessman, took up a collection to get me a limo ride to O’Hare airport. Before long I was back in Fort Wayne, once again awaiting a lift to Taylor.

If there’s one thing I learned from all this, it’s that you can’t really consider yourself a young, idealistic  wanderer of life’s roads when two out of three times you hitchhike someplace, you wrangle yourself a jet to get back home.

If there are two things I learned from all this, the second is that while the proverbial grass might look greener on the other side, you must always ask yourself this question: What about the meatloaf?