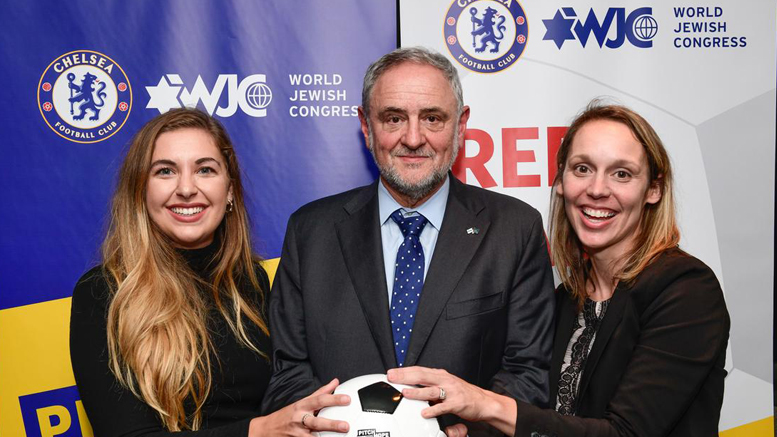 NEW YORK – The World Jewish Congress and Chelsea Football Club (Chelsea FC) on Thursday held the final competition in the US portion of a global campaign to combat widespread racism, anti-semitism and xenophobia in sports. Former Muncie resident Seren Fryatt, was named as the winner, receiving a $10,000 grant from Chelsea FC and the WJC to turn her dream into reality.

The Pitch for Hope competition called on young people ages 18-30 in the United States, the United Kingdom, and Israel to propose creative ideas for an initiative to harness the spirit of comradery in sports and build bridges between people of all backgrounds, faiths and walks of life.

The winner was among five finalists chosen in the US from among dozens of applicants, with another five chosen in Israel and the UK. The winners from each country will present their projects at Stamford Bridge later this month.

World Jewish Congress CEO and Executive Vice President Robert Singer said, after naming the winner in New York: “The fight against racism, xenophobia, and anti-semitism in sports is only just beginning, and the road ahead is still long and challenging. We are proud and honored to be teaming up with Chelsea Football Club to effect real change in this arena, but we know that we need the energy, ambition, and vision of young people to really make a difference. We wish Seren the best of luck in her endeavor, and will be with you all along the way to help you turn our collective dream, for a sports world free of hate, into reality.”

“We learn from history, and what we have learned is that powerful social shifts have been powered by grassroots efforts, by people standing up, being innovative and creative, creating disruptive solutions … we need to inspire the next generation of leaders … when we empower young leaders, we empower the world,” Seren said.

The competition is part of the Red Card for Hate initiative, launched by WJC and Chelsea this past April, which will culminate next spring in Paris with a global summit of ministers and sporting officials from around the world.

Chelsea FC is one of the world’s leading soccer teams, playing in England’s Premier League and the European Championships. The WJC is the Jewish community’s global representative to governments and international organizations, representing communities in more than 100 countries.

This initiative was made possible due to a generous contribution from Chelsea FC Club owner Roman Abramovich and World Jewish Congress President Ronald S. Lauder.

Soccer, especially in Europe, has been plagued by instances of anti-semitism and racism for years. Fans have led anti-Semitic chants, including making hissing noises to evoke the Nazi gas chambers, and targeted African and black players with monkey sounds, among other things. Ultra-nationalists and neo-Nazis have also played roles in supporter groups for various teams.