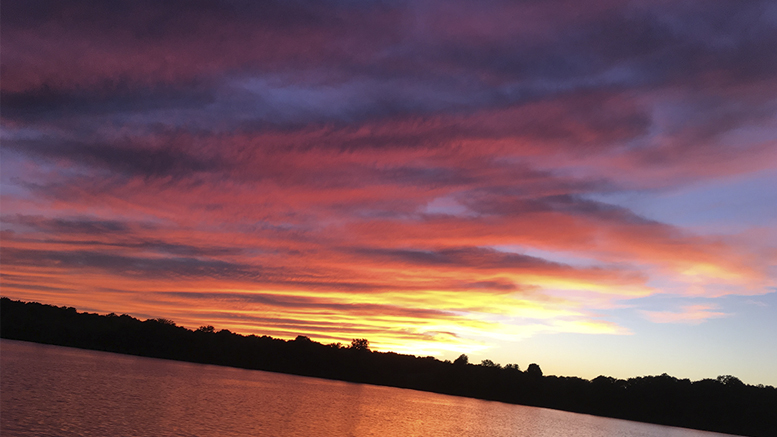 A boat provides an unfettered view of a spectacular sky. Photo provided.

There’s something wondrous about hanging out on boats…

This truth doesn’t come to mind all the time, probably because I don’t get to hang out on boats all the time. But when the rare opportunity presents itself, it quickly reminds me how wonderful hours spent afloat can be.

We are obviously blessed to have a very nifty body of water called Prairie Creek Reservoir located south of Selma. It’s small enough not to be intimidating, but large enough to be fun, and even to spark fantasies of seafaring. Thus it was that, when our friends Mark and Molly Flodder invited Nancy and me, along with our friends Mike and Buffy Grieves, for an evening on the water, we grabbed my Dad’s old Navy bosun’s whistle and jumped aboard.

The Flodders’ vessel is a pontoon boat, meaning the six of us had plenty of comfortable seating to watch the foam float past as Molly broke out the evening’s refreshments. There were plastic cups of sliced peppers, carrots and onions, rooted in ranch and caesar dressing. While normally not a raw-veggies aficionado myself, it just seemed right to wolf them down while out on our bit of Delaware County’s sea.

Then came the ham and turkey sliders, irresistibly tasty little sandwiches Molly baked. These were joined by the potato chips course. And what potato chips! There was a bag of barbecued ones, but not the traditional kind. These were flavored South Carolina-style, with a tart mustardy sauce. And there was a bag of black truffle and olive oil chips, the eating of which amounted to a nearly-spiritual experience. If actual truffles taste anything like these babies, no wonder pigs go hog wild sniffing them out.

Both were Kroger brand, which I figured meant Molly bought them at Pay Less. Crunching them loudly as we sailed along, all I could think was, “Ya know, in the total scheme of things, maybe this is God telling me that all those months we spent on the verge of starvation without a neighborhood grocery store after Marsh went belly up were not in vain.”

My next thought was that, for being on a boat, I was thinking a heck of a lot about eating stuff. But while we ate, we cruised around the reservoir at our leisure. In doing so, it slowly dawned on me that I was enjoying a wonderful experience of the non-culinary kind, too. I’ve seen the reservoir choppy before, but on this cruise the water barely rippled. Nearby, kayakers were paddling the shoreline, a speedboat towed a couple kids riding an inner tube, and a few sailboats peacefully plied the water, the very picture of nautical grace.

Scattered fishermen were trying their luck from boats and shore. I didn’t see anybody haul in anything. But from doing stories back in my old newspaper days with the late, great Ron Bonham, I can assure you the lake he loved has been stocked with some monsters. I’m talking about fish that could practically take off your hand, or at least mangle a finger or two. Additional fishing was being done from above. Mark pointed out a patrolling osprey – a “fish hawk” is how he described it, I think – wheeling in currents of air, looking for telltale flashes of fin for its dinner. Then we spotted a large dark bird with a white head gracefully circling. As an ardent admirer of all things winged, I was thrilled to recognize it as a bald eagle, only the third I had ever seen.

With time, the water smoothed out even more, becoming glassine as we slowly chugged about in the gathering dusk. It had been a marvelously sunny day, one that encouraged the use of sunglasses to shield our eyes from glare.  But with evening’s arrival, Mother Nature began putting on her makeup, dolling herself up, with the tendrils of her clouds turning golden against the deepening blue. Watching the sky transform itself from our front-row seats on the water, you wanted to stay out there. With every minute, the show got better.

It was nothing less than magical by the time the blues and golds turned into deep purples, reds and oranges that no set of oil paints could replicate. Watching those brilliant colors sharpen and then, all too soon, fade, you knew you’d seen them before. But they were never so clearly and intimately witnessed as from the water on the Flodders’ boat.

Returning to dock, I think we were all a little stunned at the beauty we’d just witnessed, and regretful  that it had to end.

My mind, meanwhile, was back on food, in spite of myself. The Flodders’ veggies, chips and sliders had been the appetizers and main course. Lastly came the little peach pastries served in ramekins that were truly excellent.

But that last half-hour we spent on the water, gazing wide-eyed into a surrealistic sky? That had definitely been dessert.