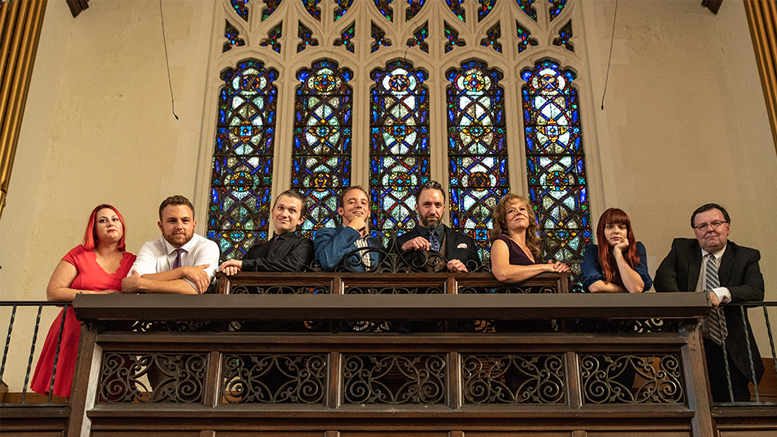 Editor’s Note: The Christians has been extended and will now play through October 6th.

Muncie, Indiana– Why do we believe what we believe?

That question, said director Nathan Hart, is at the center of a production opening this weekend at Muncie Civic’s Studio Theatre.

The Christians takes theatregoers into a modern megachurch, where a pastor delivers a sermon that shakes the very foundation of his church and his marriage.

Hart said he was drawn to the script because it “deals with the topic of faith in a complex and challenging way.”

“It’s not afraid to ask difficult questions, but it asks them sincerely and respectfully,” he added. “More often, the topic of faith is handled as something deserving of scorn and derision or too sacred and fragile to explore at all on a deeper level. It is rare to find a script that portrays people of faith as well-intentioned and compassionate, but flawed and broken human beings.”

BJ McKay is taking on the role of Paul, the pastor. “He is a very well-intentioned leader of a Christian megachurch,” he said. “He has worked hard building this church from a storefront church, 10 to 15 people, to thousands and thousands. I feel he has a lot of layers.”

The Sunday matinees will have talk-back sessions immediately following the play, led by local members of the faith community.

Andrea Replogle, a pastor for the local church The Gathering, said she “would strongly encourage the faith community to come out and see The Christians. I believe this is an excellent way to begin a dialogue in the church that wrestles with the places where theology, pride and relationships intersect in the church. This is an honest yet honoring depiction of the inner workings of a church that shows the importance of knowing what we believe.”

McKay said the focus on relationships in the story makes The Christians “accessible.” “This show is for everyone, not just people of faith,” he said.

McKay added that he hopes everyone who comes to the play walks away “asking deeper questions about relationships, life and the meaning of it all.”

“I thought, after reading the play, that it was written for the drive home after you’ve watched the show. Belief is a heavy word, and it comes with responsibilities to live up to. Beliefs will cost you. That is real. I hope that we, the cast, put that on display through this performance.”

The Christians is possible with support from Carpets Plus ColorTile and The Cathleen Casazza Memorial Fund.

For tickets or more information, go to www.munciecivic.org or call 288-PLAY.