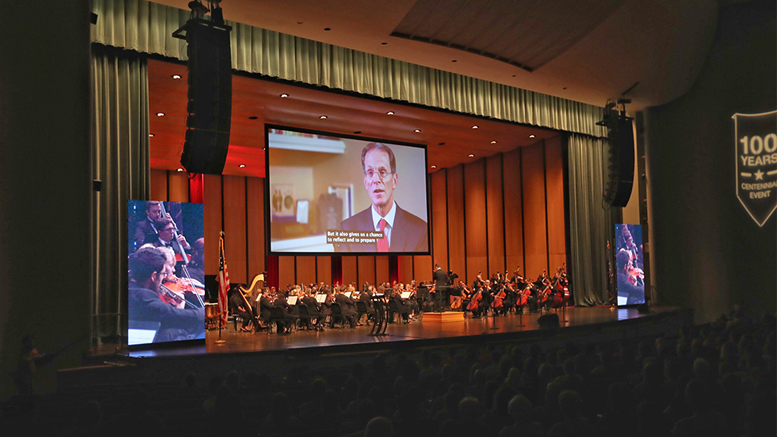 A scene inside Emens Auditorium as Ball State kicked off the Centennial Celebration. Photo provided.

Muncie, Indiana – From the “Cardinal” red carpet entrance by former Ball State presidents and other dignitaries, to an emotional rendition of “We Fly” to a heart pounding conclusion with a fireworks display, the campus community came together Thursday, September 6, to kick off a yearlong celebration of University’s 100th anniversary.

Ball State President Geoffrey S. Mearns pointed out that while many things have changed in the University’s first 100 years, the constant has been the values symbolized by the iconic statue Beneficence. It was completed in 1937, the height of the Great Depression, as a result of local residents raising funds to install it on campus.

“A century ago, it was the generosity of the Ball brothers who provided the land for this institution,” said Mearns, who noted the University’s new partnership with Muncie Community Schools to improve the educational experiences for all children in the community.  “But it was the generosity of the people of Muncie that sustained and grew their vision to bring higher education to east central Indiana. I am thankful for their efforts.”

“And in the months to come, I look forward to embracing our Centennial events, projects, and activities with an abiding sense of gratitude for the women and men who founded this institution and for the people who transformed it into the outstanding University that we have inherited.”

In the recently renovated and enhanced Emens Auditorium, Indiana First Lady Janet Holcomb, who received her bachelor’s and master’s degrees from Ball State in 1992 and 1996, respectively, read the Gubernatorial Centennial Proclamation recognizing the celebration and the University’s impact on the state.

The president noted that the First Lady has praised the University for empowering her with a passion and a purpose for the arts and for serving others.

“Each of these educators — these leaders — was passionately committed to this University,” President Mearns said. “The Ball State community was fortunate to experience their guidance in its first 100 years. Individually — and collectively — they played an important role in helping this institution evolve into the premier public University it is today.”

The highlight of the evening was the premiere of the student-produced Centennial documentary, “From Normal to Extraordinary: Ball State’s First Century.” The Ball State Symphony Orchestra accompanied the documentary, which recognizes the historic effect Ball State has had because of the talents of faculty, staff, students, and alumni.

President Mearns said the documentary was a monumental undertaking.

“A project of this size and of this scope requires a lot of talent and skill,” he said. “And it requires thousands of hours of hard work. Some universities would hire a film company to do this work. But at Ball State, we entrusted this critical responsibility to our students. What makes a Ball State immersive learning experience like this one so valuable is that it is a real-world experience that is comparable to those that await our students once they graduate.”