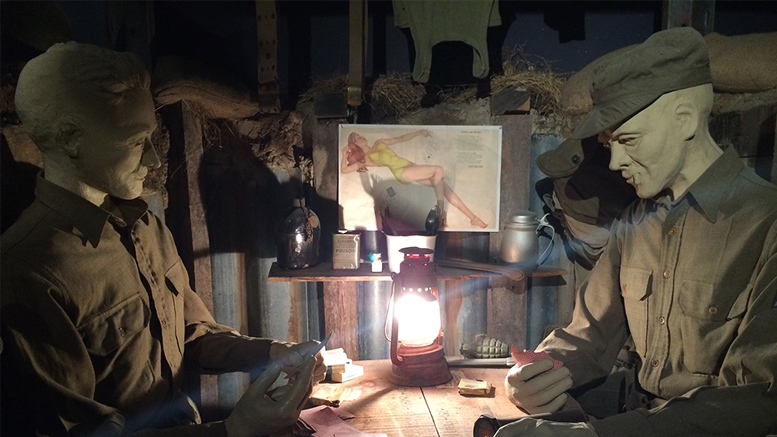 Ernie Pyle and a GI play cards in this recreated dugout scene. Photo by: Nancy Carlson

This time of year, the sleepy burg of Dana rests like a hundred other Indiana towns, a tiny island afloat on endless fields of ripening corn and soybeans.

One important distinction sets it apart from all others, though.

This is where Ernie Pyle was born, back in 1900. Most folks say the blessed event occurred in the house located on a quiet corner. Some say it didn’t. Either way, at the time, this sturdy dwelling was located a mile or two out into the country, before being uprooted and moved to a more prominent place.

Townsfolk moved Pyle’s presumptive birthplace to make it easier for the curious to visit, a singular honor. But to the dwindling number of folks for whom Pyle remains a man to be admired and lauded, it just seemed like the right thing to do.

As you may or may not know, Pyle was a newspaperman, a traveling correspondent for Scripps-Howard. In the years leading up to World War II, his beat was the exciting world of aviation. Then he was tasked with traveling America – which he did with his wife, Geraldine – entertaining countless  readers with columns written about the folks he met along the way.

But it was with the dawning of World War II that his reputation truly ascended. Having joined the Navy as a teenager during World War I, he was still in training when it ended. Now, he found himself on rooftops in London writing about the horrors of “the Blitz,” the German bombings. With America’s entry into the war following Japan’s attack on Pearl Harbor, he went on to cover his countrymen’s participation in the North African campaign, the savage fighting in Sicily and Italy, the D-day invasion and the battle to liberate Western Europe.

By now 45 years old, he couldn’t have been blamed for returning to the safety of home following Germany’s defeat. Instead, he joined American troops at the battle for Okinawa. On April 18, 1945, on the small island of Ie Shima, the Jeep he was riding in came under machine-gun fire. Taking cover in a ditch, he raised his head after the shooting stopped, then was killed instantly by a second burst.

Sad as that was, two things made Pyle’s fate particularly tragic. First was his unquestioned brilliance as a writer. While heading to Dana recently, my wife Nancy read me a column he wrote about the sight of Omaha beach the day after the invasion. When she went silent, there was no need to ask why. I was swallowing a lump in my throat, too.

Secondly, Pyle didn’t care about covering “the big picture.” He chronicled the war as fought by the common soldier, sailor and airman. When he did fall in with officers, it was the ones fighting alongside the troops at the front. Their stories – be they of boredom, of fighting, of fear, or of heroism – were what he captured so eloquently for the folks back home.

Given that, the Ernie Pyle World War II Museum in Dana is appropriately built from two connected Quonset huts. Enter one and you first read President Harry Truman’s sad reaction after learning of the newspaperman’s death.  Then you watch a couple quick films about his life.

Full-size scenes recreated inside the huts include one of Pyle and a GI in a dugout playing cards. Another sobering scene illustrates his column about the very stretch of ravaged, abandoned beach that so affected my wife and me. Another, paired with a short film, recreates the scene from his unforgettable column about the death of a beloved young officer, Capt. Waskow, and the poignant way  his war-weary soldiers mourned him.

There are personal items of Pyle’s here, too, including his Purple Heart. Normally awarded only to wounded servicemen and women, Pyle was posthumously given the medal in 1983 by a special act of Congress. On a lighter note, there’s also a magazine featuring Pyle in an advertisement for Chesterfield cigarettes. Just don’t try telling docent Janice Duncan that you now know what brand of smokes Pyle preferred.

“He smoked Camels,” she’ll tell you with a laugh, explaining the offer to pay the celebrated columnist  for a  Chesterfield ad came along and … what the heck, he figured, a thousand bucks was a thousand bucks.

But back to the war. Among other mementoes gathered, there’s a recreation of a yellowed Western Union telegram. The real one was delivered to Pyle’s father, regretting to inform him that his son Ernie had been killed in combat.

It’s just like the countless thousands that were delivered to other grieving parents throughout the war.

If you didn’t know it before, in touring the museum and Pyle’s home, you come to understand this place and its subject are legitimate Indiana historical treasures. Late President Gerald Ford, late “60 Minutes” commentator Andy Rooney and late CBS correspondent Charles Kuralt all praise Pyle from the screen of a small television. Another exhibit notes the work donated to the site by late TV and movie actor William Windom. A paratrooper who fought in Europe, then went on to appear in shows including “Murder She Wrote,” “Star Trek” and even”To Kill a Mockingbird,” Windom made the trek to Dana to freely contribute to honoring the legendary correspondent.

This is not an Indiana State Historic Site, however. That designation was yanked eight years ago, because not enough bodies were coming through the door. The state even moved Pyle’s personal items to the Indiana State Museum, before giving some back.

There’s the sports coat Pyle wore to take tea with First Lady Eleanor Roosevelt, the one he was embarrassed to wear because it had a couple holes in one elbow. That coat remains among the missing items.

When the museum desperately needed money, it wasn’t Indiana that ran to its rescue, either.  Scripps-Howard came through with a $250,000 grant, and it’s The Friends of Ernie Pyle who nurture the place now.

All of which signifies a sad concession to the passage of time and modern America’s woefully short attention span.

Our heroes come and go anymore like the flavor of the month. With every day that passes, Pyle’s name and, sadder yet, his story recede more and more into the past, despite this place’s heroic effort to do something to counter it. Meanwhile, folks down in Dana talk fondly of what it would mean, were Indiana’s state government to reclaim the place that honors this remarkable Hoosier’s life and name.

Nobody is counting on it, though.