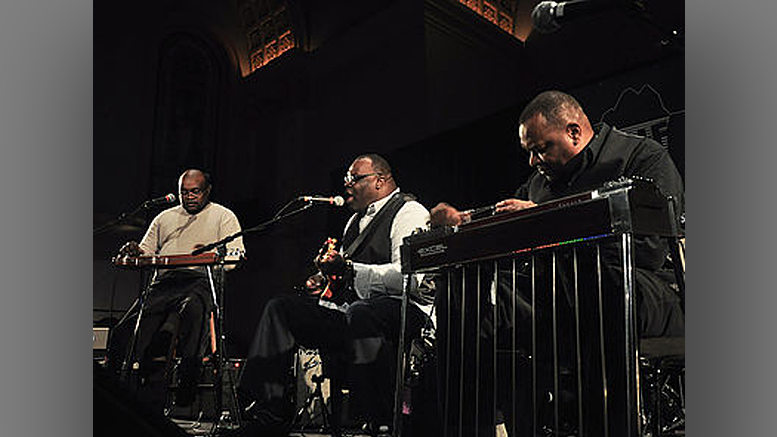 Muncie, IN –Legendary Sacred Steel Gospel group The Campbell Brothers will be performing in a FREE outdoor concert as part of the 2018 Muncie Three Trails Music Series. This concert is sponsored by the Community Foundation of Muncie & Delaware County and will take place at 7:00 PM on Saturday, July 28th at Canan Commons (500 S. Walnut St.) in the heart of downtown Muncie, IN. The Freetown Village Singers from the Madame Walker Theater in Indianapolis will open the show.

The Campbell Brothers present a compelling and rich variety of material from the African-American Holiness-Pentecostal repertoire with a new twist: the growling, wailing, shouting, singing and swinging voice of the steel guitar, played as you have never heard it played before. The Campbell Brothers, whose father is a bishop, grew up in churches where steel guitars replaced organs, a style known as Sacred Steel.

Every Sunday they played for church services, where they were admonished to “play the word.” This tradition, including electrifying vocals, is just now emerging from the House of God Keith Dominion Church, where for over sixty years it has been an integral part of worship and a vital, if little known, American tradition. As the music has moved from sanctuary to concert hall — including the Hollywood Bowl, the Kennedy Center, Brooklyn Academy of Music and Symphony Space — secular audiences are now able to appreciate performances both devoted and rocking.

The Campbell Brothers excellence has been well-recognized in the music community, with the Real Blues Awards bestowing a Best U.S. Gospel Instrumentals of the Year award upon the group and the Indie Awards handing them a Best Gospel Album statuette. Too, pedal-steel guitarist Chuck Campbell is a 2004 National Heritage Fellowship recipient for his contributions in preserving the heritage of African-American music. Chuck is renowned for his innovative approach to the instrument both technically and musically. His use of effects such as distortion, the wah pedal and his picking techniques enable him to emulate the human voice in an uncanny fashion, which evokes images of gospel moaning and field singing. Rounding out the band, which has been together for over two decades, is Chuck’s lap steel-playing brother, Darick, brother Phil Campbell on electric guitar, and a high-energy rhythm section featuring Carlton Campbell on drums and Daric Bennett on bass. Powerhouse vocalist Katie Jackson completes the group.

More information about the Three Trails series can be found at www.munciethreetrails.com.