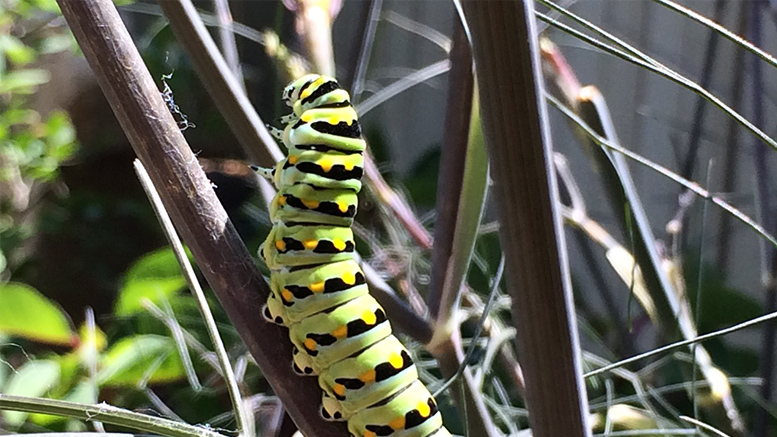 A backyard garden like ours is supposed to be a place of peace and contemplation, but it isn’t when my wife is taking her caterpillar count.

Then things get a trifle tense.

Several evenings ago, Nancy found nine caterpillars stuck to a couple of our plants out back. This was cause for celebration. After all, butterflies – which magically spring from caterpillars, if I remember correctly – aren’t nearly as profuse as they once were. Come to think of it, same thing with lightning bugs, the apparent dearth of which also scares the bejesus out of me.

It doesn’t seem a huge jump in logic to think that, in a world that butterflies and lightning bugs struggle to inhabit, something bad may be happening. Forgive the colloquialism, but if the world ain’t good for them, it probably ain’t all that good for us, either.

So when Nancy took her follow-up caterpillar count a day or two later, and only seven caterpillars could be found, she got a little edgy.

“Where’d the other two go?” she asked me with an accusatory tone, like maybe they were jammed in my pocket.

This seemed to convince her I had nothing to do with it.

Even so, I’ll be the first to admit to having a lengthy record of lightning-bug abuse. Back when I was a kid, we young bug murderers were a veritable plague on lightning bugs. Every night of summer we’d be out there in force, giving nary a thought to the hundreds we disemboweled. All this, just so we could stick imaginary rings made of glowing lightning-bug guts on our chubby little fingers.

Of course, we didn’t have cell phones to otherwise entertain ourselves.

While I don’t recall a similar wholesale slaughter of butterflies, there seemed to be plenty enough to go around. Snatching one wasn’t a big deal.

Sixty years later, I’m amazed how dramatic it is to see lightning bugs light up the night. I’m also amazed at how a butterfly’s passing flight delights us. When a butterfly alights on one of our plants, we dash out there taking pictures. While taxiing down the runway at Reese Airport a week ago in my funky little blue airplane, a yellow swallowtail fluttered wobbly across my path. For a moment, I felt something akin to kinship.

It’s no surprise that human involvement is thought to be a significant culprit in the declining numbers of  butterflies and lightning bugs. Threats to their habitat – whether from turning under local fields for another new housing development, or the far-reaching effects of global climate change – surely have an effect.

But other causes? Life for bugs is simply a risky business.

My memory of a caterpillar we had last year never fades. One day it seemed to be covered in rice. But looking closely revealed those rice kernels were actually fat little worms, and they were eating that caterpillar alive. It was just nature at work, but as a softie who bawled through “Old Yeller” as a kid, it also seemed heartless and more than a little disgusting.

Just yesterday, as I accompanied Nancy on her caterpillar count, she could only find six. These were stout, beautiful creatures, though, lime green with black stripes and yellow spots. She had to carefully comb the dense growth of a dill plant and a fennel plant to find them, but there they were, clinging to branches and looking downright brawny, as caterpillars go.

Today she checked them again. We were down to two.

So it turns out the cute little birds, which abound around our house, enjoy a juicy caterpillar for dinner when they can get one. Yellow jackets, which also hang about our place, find them appetizing, too. Furthermore, I was shocked to learn that certain beetles apparently take to caterpillars like chocaholics take to bonbons.

That came as a particular shock, since beetles are all over the blooms on our milkweed plants. We planted those milkweeds specifically because they are supposed to be the traditional launch pads of the eggs that turn into caterpillars that turn into monarch butterflies.

Now, raising caterpillars next to beetles seems a bit like holding a Weight Watchers meeting in an MCL cafeteria. Maybe even right next to the desserts and scalloped potatoes.

Anyway, God only knows if any of our caterpillars will be left by the time you read this. Chances are they won’t, given the fact we went from nine to two within just one week.

Bad as that is, it has served as a reminder for Nancy and me not to take such objects of natural grandeur for granted. The butterflies you see have likely been through the proverbial wringer to get to where they are, so enjoy them and the lightning bugs when you can.

Maybe even while you can.

Postscript: The day before sending this column to the Muncie Journal, Nancy checked and all our caterpillars were gone. Then, as she came inside to tell me, she went something like, “Eek! There’s a caterpillar on my pants!” It was a tiny thing, but you could still make out the green and yellow coloring. Carrying it outside, she gently put it in an out-of-the-way place on our dill plant.

Godspeed, little fella, was all I could think. Godspeed.