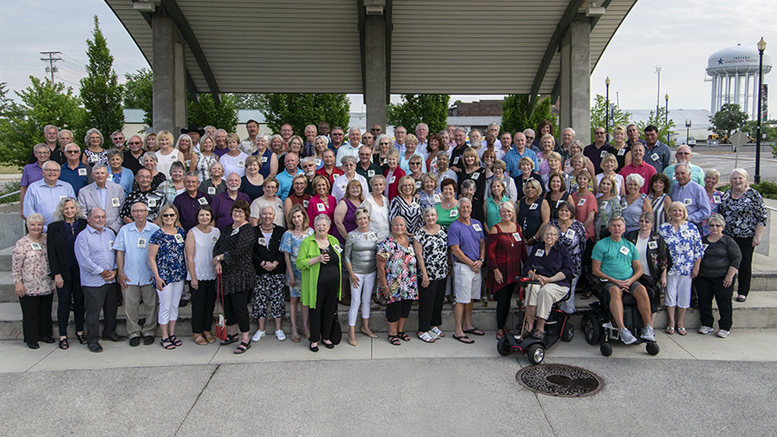 Muncie, IN—The weekend of June 8-10 was momentous for a very special group of people, and the City of Muncie.  The Muncie Central High School Class of 1968 converged on the heart of downtown Muncie to celebrate their golden anniversary.

50 years ago, 512 people walked across the stage in the field house to receive their diplomas, and from that moment, moved forward to forge their lives into something special. Approximately 170 people showed up for the reunion, from practically every state in the nation.

There were artists, poets, song writers, journalists, rock and roll singers, classical musicians, chemists, teachers, bankers, police officers—people from all walks of life. Even an honest to goodness cowboy.

The spirit and closeness of this group of “Bearcats,” made for a very special weekend. In 1968, members of this graduating class were all turning 18 years old at some point during the year.  Now, in 2018, class members are all turning 68 on their 50th anniversary.  That can only happen once in a hundred years. 18 and 68 were magical numbers for this crowd.  Memories of the history of the old school building in the heart of downtown Muncie, the Bearcat spirit, and traditions came flooding back, and this class celebrated in style, and with passion.

Click on the image above to view a larger image of the reunion photograph. Photo by: Mike Rhodes

The most popular student rock-and-roll band of that era came together again, after a number of decades of not playing together, and reprised a whole set of tunes from 1968. It was quite a sight to see everyone in the room dancing and singing along.

Members of the class who were lost to war, or sickness, or accidents were honored reverently, as each of their individual names were read out loud.

Everyone in this class became 50 years younger because of this special weekend, as everyone saw the youthful, beautiful faces of the young men and women of 1968 again.  The  class president and homecoming queen were there, as well as many of our star athletes.  Smiles filled the room at Thr3e Wise Men Brewing Co.—and they were non-stop.

Downtown Muncie experienced quite a cash influx with the hotel rooms that were booked, caterers, restaurants, retail businesses and other services that came into play during the three day affair, and the class of 1968 would be remiss if those businesses were not recognized.

Thanks goes out to Pizza King for hosting this large group on the first night of the weekend.  Thanks are in order for the caterers and Thr3e Wise Men, who went out of their way  to present a very tasty dinner with a menu du jour not customarily available at the venue.

Thanks also goes out to Staples for custom ordering mailing envelopes to accommodate the official class photos that will be mailed to class members.  A thank you is also in order for Jacks Camera shop who will be printing all of the  8X10 photos with special pricing for the class.  Last, but certainly not least, the Class of 1968 thanks the City of Muncie for allowing the use of the concert area at Canan Commons for our large group picture.

It was a perfect setting.