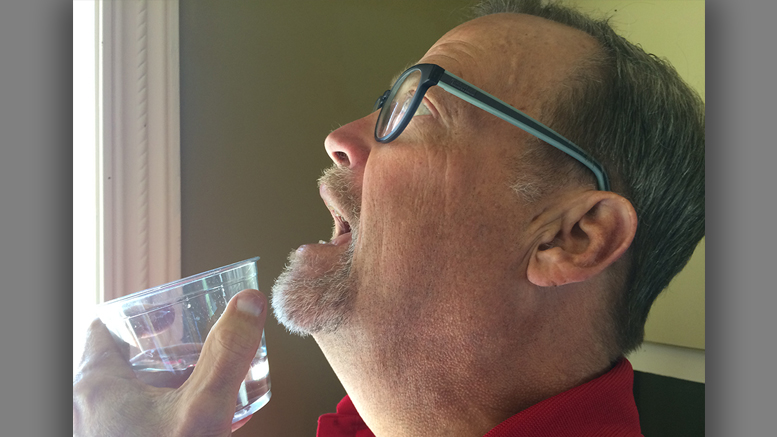 The secret to sounding like a German is in the throat. Photo by: Nancy Carlson

Because Nancy and her sisters are planning a trip to Europe, retracing their late father’s path during World War II from Normandy across the Rhine into Germany, she first intends to brush up on her French and German.

Sure, it’s been years since I’ve spoken either language, but I can still count to five in French, plus say the phrase, “Bon fromage chapeau!” which translates to, “Nice cheese hat!” This should come in pretty handy in Paris, or if their flight is diverted to Green Bay, Wis. Plus, I am even more conversant in German, or what is sometimes referred to as “Deutsch.”

In German, I can count to 10, and order two beers.

I owe these verbal skills to my high school German teacher, who grew up in a Deutsch-speaking family. Far from teaching us merely to mouth German words with teenage American inflections, he made us count to 10 and order two beers like real Germans would. The key to this process, he believed, was gargling.

Gargling, Herr What’s-His-Name insisted, was the only way to master the guttural sounds required of the German language. Consequently, we began every class by gargling water he served us in little cups. Frankly, I doubt any of us was a natural gargler when the school year began, we being a pretty gritty bunch, and Listerine being mostly for the rich kids. But within a month, I was a gargling whiz-bang. In my prime, for two minutes straight, I could gargle a mouthful of soggy Cheezits. A horrible student in every other respect, I knew that had there been a National Honor Society of Gargling, I’d have been a shoo-in.

The day was to come, though, when I would rue all this.

Upon marrying in 1982, Nancy and I honeymooned in the Netherlands. Taking a short train excursion to Germany one day, we got off in Aachen, where as usual, I made a beeline toward the nearest tavern. Walking inside, I couldn’t help but notice there were some actual Germans sitting around, one of whom was the bartender.

Bellying up to the bar, I doubtfully ordered, “Zwie biers, bitte?” then nearly fainted when the guy served us two drafts.

“Holy crap!” I exclaimed to myself. “German really works!”

Right away this bartender decided I was an OK guy. Smugly sipping beer past the smile plastered across my face, I nodded pleasantly as he jovially said something like, “Das keener schmegel auf gerbunker hamsta! Das gepoochen?”

Now, had I been thinking, right about then I would have thrown up my hands and conceded, “Ich bein ein dumbkof! Ich bein knowen nix Germanski!” or something like that. But at this point, it felt so good being accepted as a fellow German speaker by my new bartender buddy, I found myself enthusiastically agreeing, “Ja! Ja!”

But with that, his eyes narrowed suspiciously as he cautiously backed away from the bar. Meanwhile, the tavern went hushed, as my fellow drinkers nervously cast long, sideways looks my way. “Gepoochen?” several customers muttered in shock.

It was only then I realized that, for all I knew, I had just wholeheartedly agreed with the bartender that, “Yes! Yes! Of course, I love sniffing hamsters every morning! Plus puppies!” Or maybe it was something far weirder than that! Whatever it was, at my urging Nancy and I drank up and hustled back to the train station, with the bartender undoubtedly shaking his head wondering how the Nazis ever lost the war to the Americans.

So whatever I teach Nancy before her trip, my advice will be don’t pretend you speak a foreign language better than you actually do. Well, except in France, where for all I know, maybe hamster-sniffing is a thing.