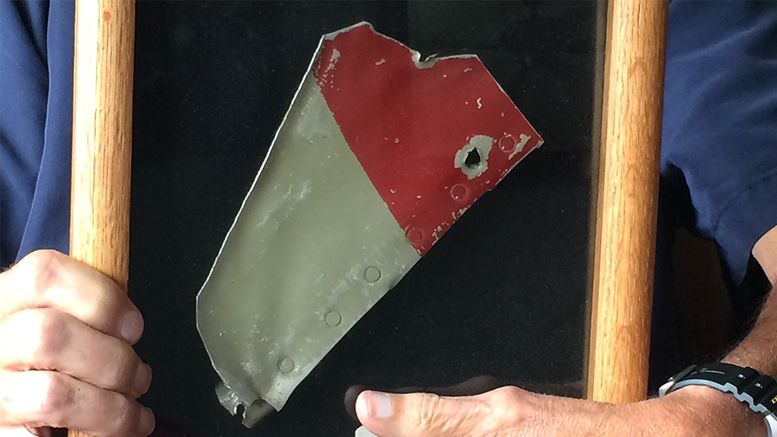 It’s a wood-framed shadow box, measuring about 8-by-12 inches, that once hung on a wall just outside my late father’s living room and now rests on a bookshelf in my home office.

Mounted inside the box on black velvet is a triangular piece of metal. Maybe 6-inches long and jagged on one end, it’s painted forest green and deep red, with six rivets dotting its length. It doesn’t look like much, but for our family, it is a treasured object.

The red, being part of Japan’s Rising Sun insignia, hints at its identity. It’s a piece of the kamikaze that was crashed into my Dad’s ship, the S.S. Brown Victory, while it was anchored off the isle of Ie Shima during the battle for Okinawa on May 27, 1945. The memento was cut from a larger piece of the plane’s wreckage, then given him by a former shipmate years after the war ended.

It would probably be an object of mystery to our family had not my Dad, in 2008, typed out his recollections of the attack. In the plainest, most unemotional language imaginable, he described how another suicide plane, a Mitsubishi Zero fighter, had been shot down just 100 feet from his ship the previous morning.

“A short while later the body of the pilot surfaced and floated away,” he wrote. “I spotted what I thought might be a parachute floating along behind him but soon realized a Kamikaze would not have a parachute. Scrutiny revealed that it was probably his intestines.”

For my Dad, who was 19 at the time of the attack, and his fellow Navy crewmen who manned the merchant ship’s guns, their turn would come about 7:45 a.m. the following morning.

Called to their battle stations,  they reached their 5-inch cannon when the kamikaze – this one a twin-engine Mitsubishi bomber the Americans nicknamed the “Betty” – was already diving on them. They never got off a shot.

“He struck our after mast which was cut off and fell partially into the 4th and 5th holds. Fires were ignited in the holds also. I was knocked out momentarily and off my gun captain stand and onto the deck in the gun tub.”

As for his gun’s other crewmen, the aimers were in good shape, with the trainer and sight-setter apparently uninjured, and the pointer not seriously wounded.

But the first shellman, standing directly behind the pointer, was. Blinded in his right eye, much of the fabric from his life jacket, along with its attached whistle and battery-powered light, were blown into his back. Dad noted that a newspaper at the military hospital to which the sailor was evacuated later dubbed him “the walking junk man.”

When Dad regained consciousness, he wrote, he didn’t see his gun crew’s first powderman. “I was told at a reunion many years after my discharge that the upper part of his body was blown out of the gun tub and retrieved from the water. He was a Yakima Indian.”

“The hot shellman, Harold Buckridge, knelt immediately aft of the first powderman …” he continued. “As I came to, he was the first one I saw: He was in his kneeling position with his back blown wide open. He was my closest shipmate.”

Dad, who had been only a foot away from Buckridge, was also wounded, taking shrapnel in his shoulder. Evacuated from his ship via landing craft, he was flown to hospitals in Okinawa and then Guam. Days later, when presented his Purple Heart, the dungarees he wore were still stained with his buddies’ blood.

Studying that piece of the Betty bomber that hit Dad’s ship, plus reading his account of it, always sobers me, but never more so than along about Memorial Day. It’s a poignant reminder that this is the day we honor America’s war dead.

Beyond doubt, mere words don’t measure up to that task. At least our words, from those of us who have never put our lives on the line for our country, don’t.

But for those heroic men and women who have witnessed the sacrifices of their comrades firsthand, awareness of their stories is the least we can offer to honor them. Books like “Band of Brothers” and “Flyboys” tell unforgettable tales of World War II. Stories regarding “The Chosin Frozen” and books like “Dispatches” offer the same hellish insight and understanding from the wars in Korea and Vietnam. Now, soldiers’ memoirs from our wars in Iraq and Afghanistan, books like “The Last True Story I’ll Ever Tell” and “The Things They Cannot Say,” are inexorably making their way onto the shelves of American war literature.

Reading them, you can’t dodge the lump in your throat.

Perhaps the best writer to ever capture such truths was a Hoosier, the legendary World War II correspondent Ernie Pyle, and his most famous piece was “The Death of Captain Waskow.” It describes the removal of that popular young officer’s body, strapped across the back of a mule, from the Italian mountainside on which he had been killed in combat.

There were two war-hardened GIs’ who, looking at their captain’s body, muttered “God damn it,” and, “God damn it to hell,” harsh words for newspapers to print in that day and age. And there was another GI’s softly pronounced farewell, “I’m so sorry, sir.”

But perhaps most strikingly, there was the GI who said nothing at all.

“Then the first man squatted down and he reached down and took the dead hand, and he sat there for a full five minutes, holding the dead hand in his own and looking intently into the dead face, and he never uttered a sound all the time he sat there,” Pyle wrote.

“And finally he put the hand down and then reached up and gently straightened the points of the captain’s shirt collar, and then he sort of rearranged the tattered edges of his uniform around the wound, and then he got up and walked away down the road in the moonlight, all alone.”

Pyle, who loved the GIs as much as they loved him, was killed by machine-gun fire on that tiny isle of Ie Shima, just off which my Dad’s ship was anchored when it was struck by that kamikaze three weeks later. It’s sad the correspondent wasn’t around to record those kids’ stories, too, but even the most naïve of us must suspect that’s what war is all about.

Anyway, I’m enough of a Pyle fan to realize my father’s story can’t compete with the famed correspondent’s as literature. Instead of writing, chemistry and math became Dad’s areas of expertise.

Still, this Memorial Day weekend, reading his simple words leaves a lump in my throat, too.