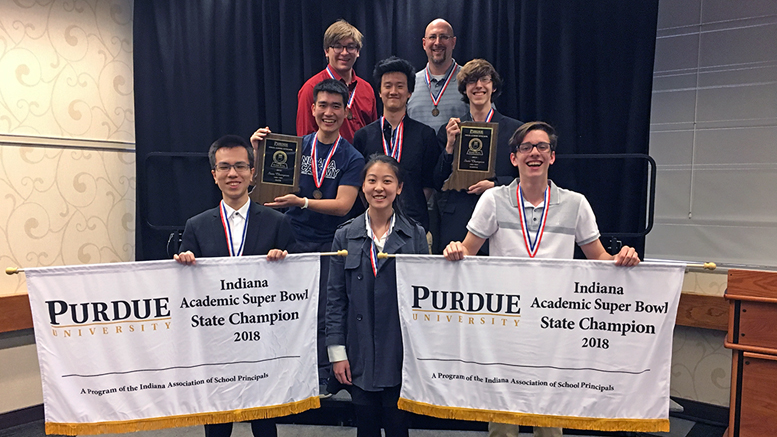 Muncie, IN—Two teams from the Indiana Academy for Science, Mathematics, and Humanities participated in the statewide Indiana Academic Super Bowl Championship. The Academy’s science and math teams both finished in first place. The last time the Academy took two state championships in the same year was 2008 when the Academy also brought home the math and science trophies.

Hosted by the Indiana Association of School Principals (IASP) the Super Bowl finals took place Saturday, May 5 on the campus of Purdue University in West Lafayette. The theme of the Academic Super Bowl this year was WWI. Various academic subjects were tested based on this specific period of time, and each subject area looked at the developments in that field around the time of WWI.

The Academy’s math and science teams qualified to compete in the state finals after winning at the regional competition on Tuesday, April 17 that included approximately 5,100 students representing 282 high schools from across the state.

The Academy’s Academic Super Bowl coach is Mr. Joshua Ruark, Instructor of Mathematics. Members of the winning teams were:

Located on the picturesque campus of Ball State University, the Indiana Academy for Science, Mathematics, and Humanities is a nationally ranked two-year public high school for high ability juniors and seniors coming from anywhere in the state.

You can visit https://academy.bsu.edu for more information about the Indiana Academy.