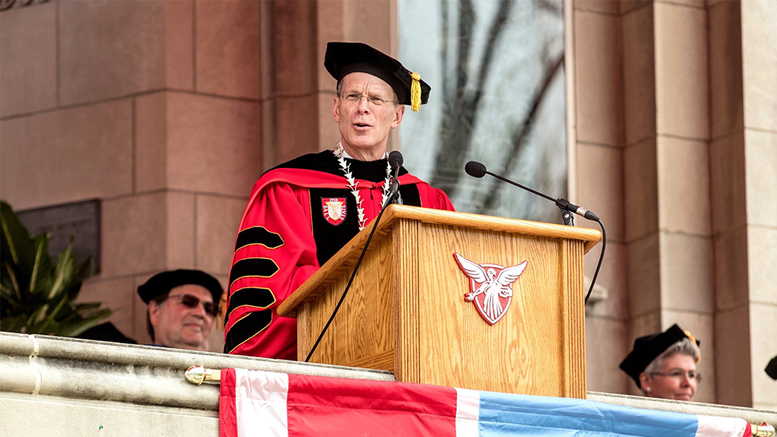 From the stage of the Arts Terrace on the Old Quad, the president also urged the 3,300 graduates to serve their neighbors, commit themselves to a life of excellence and to serve others.

“But, always remember that professional success and personal satisfaction require more than knowledge and talent,” President Mearns said. “To lead a meaningful life, you must embody certain core values, such as the enduring values articulated in the Beneficence Pledge.

Be sincere, and speak the truth.

“Model integrity – and value integrity in others. Character matters.  And so does heart.”

Applauding the graduates for achieving academic success despite obstacles, President Mearns also reminded them that there would be more challenges, and some disappointments, in the days and years ahead.

“But never forget the dream that brings you here today,” he said. “Pursue that dream with passion and with courage. “

The Ball State president also asked the new graduates to remember the efforts of members of the University community who committed time and effort both in and out of the classroom to help them achieve their goals. 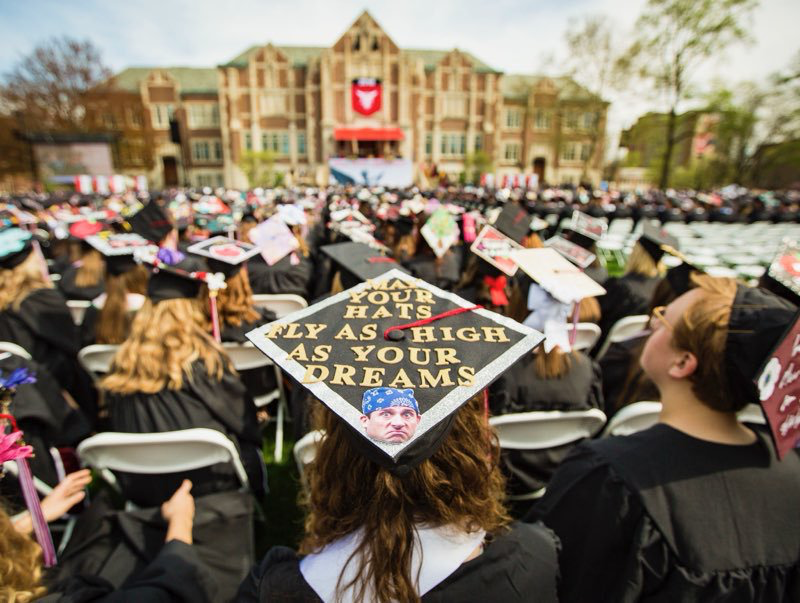 “Now, to another special group of people who deserve our recognition. These are the men and women who have guided you. They have been there to support you with enthusiastic encouragement, with good advice, and with unconditional love,” said President Mearns before leading the graduates in a round of applause for their families and friends.

During the ceremony, the University also bestowed entrepreneur and philanthropist Robert G. “Bob” Hunt with an honorary doctorate of laws for his many contributions to Ball State as well as his efforts as a business executive and as a compassionate humanitarian.

“It’s about you making a difference if you choose to. And to that, I want to challenge each of you to make positive decisions, to recognize the consequences,” he said. “Be inspired, be inspiring to others, and do it all with humility and a large amount of gratitude”

He graduated from Ball State in 1969 with his bachelor’s degree. His career with the construction company that his grandfather established in 1944 began as an iron worker’s apprentice fabricating handrails and steel stairs in the company’s iron shop. He went on to serve as the company’s CEO and later as its chairman/CEO.

Today, the company, now known as AECOM Hunt, regularly hires Ball State graduates and is recognized as one of the country’s largest builders of sports facilities and convention centers, with anywhere from $6-$8 billion worth of projects under contract at any given time. Its project portfolio includes Lucas Oil Stadium, the Indianapolis International Airport terminal, and dozens of major league and collegiate sports stadiums and arenas across the nation.

Over the course of his successful career, he has returned to Ball State to serve as an executive-in-residence and to mentor two immersive learning projects. In 2016, Ball State dedicated the technologically advanced, student-centered Robert G. Hunt Center for Construction Management within the renovated Applied Technology Building. The center’s name honors Mr. Hunt, his wife, Diana, and their family’s philanthropic investment in graduates of Ball State’s construction management program.

Founded in 1918 and located in Muncie, Ball State is one of Indiana’s signature universities and an economic driver for the state. The University’s 2017-18 enrollment — 22,513 — is the largest in school history, and its freshman class of 4,002 is just three students shy of a school record. Every Indiana county is represented among Ball State’s student body, as are all 50 states and 68 countries. Ball State’s 731-acre campus is large enough to accommodate premier facilities and 19 NCAA Division I sports, but small enough to ensure the friendliness, personal attention, and access that are the hallmarks of the University, where 90 percent of classes are taught by faculty. Ball State had its smallest tuition increases in 41 years for fiscal years 2018 and 2019.