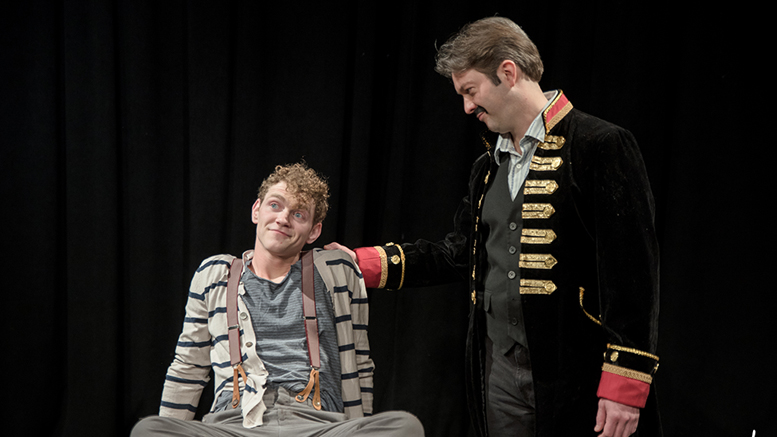 “Peter and the Starcatcher” is setting sail this week at Muncie Civic Theatre.

This prequel to “Peter Pan” promises swashbuckling stories of adventure, heroes, villains, and quests for treasure.

A wildly theatrical adaptation of humor columnist Dave Barry and Ridley Pearson’s best-selling novel, “Peter and the Starcatcher” upends the century-old story of how a miserable orphan comes to be The Boy Who Would Not Grow Up (a.k.a. Peter Pan).

The high-seas hijinks find Peter and his mysterious new friend, Molly, overcoming bands of pirates and thieves in their quest to keep a magical secret safe and save the world from evil. From marauding pirates and jungle tyrants to unwilling comrades and unlikely heroes, “Peter and the Starcatcher” playfully explores the depths of greed and despair, and the bonds of friendship, duty and love.

“I was really drawn to this show because it is all about putting on an exciting and magical experience in the theatre,” he said. “The kids who grew up with Peter Pan loved his fearless spirit and all of the adventures he went on. Neverland was a place to believe, to be a kid and never grow up. I was one of those kids who never wanted to grow up, but here I am heading towards graduation in May!

“One of the best lessons I learned from Peter Pan is that all I need is to believe, and I can be whatever I want to be. As an actor, I work to believe in the world and lives of my character, and the chance to be Peter Pan was huge for me. Playing Peter is such good fun because he is the epitome of fun and adventure.”

For every hero, there must be a villain. That’s where Michael Williamson comes in. He plays Black Stache (who becomes the Captain Hook character in “Peter Pan”).

“It is a lot of fun to play the villain and allows you to explore several sides of yourself,” he said.  “I have done my best to draw on my own life experiences and the portrayal of other villains to bring Black Stache to life.  He calls himself the ‘ultimate pirate’ and demonstrates that he is a romantic poet (though sometimes bumbling), a ruthless murderer, and fearless leader who is in search of a ‘bona fide’ hero to help him ‘feel whole.’

“It has been a real challenge for me to unify all of these parts during the rehearsal process – I have enjoyed getting to know him.”

Leading Pan, the pirates and the rest of the cast is Ball State University theater professor Michael Daehn.

“We are fortunate to have the expertise of Ball State Theatre faculty working on our show, with direction by Michael Daehn, music direction by Alex Kocoshis, and movement design by Drew Vidal,” Williamson said.

He added that the cast is “a wonderful mix of newly-minted community members, alongside some of Ball State’s finest acting students.”

“The show promises to a busy adventure from start to finish!” Williamson said.

Performances on Thursday, Friday and Saturday will be at 7:30 p.m., and the Sunday matinees will be at 2 p.m. Tickets are $18 for adults, $15 for groups of 10 or more, and $13 for students and children. For tickets and more information, go to www.munciecivic.org.