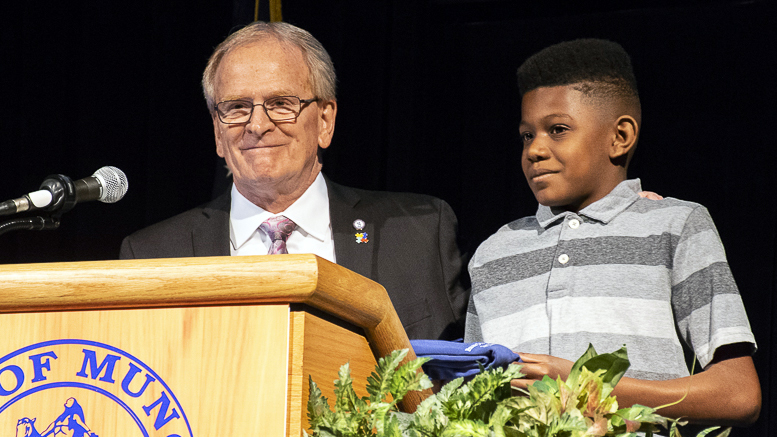 Mayor Dennis Tyler is pictured with Terry Miles, who authored the book, "The Shot Heard Around The Town." Mayor Tyler named Terry an Honorary Deputy Mayor of the City of Muncie. Photo by: Mike Rhodes

Muncie, IN—Muncie Mayor Dennis Tyler presented his annual State of the City Address at a breakfast held at the Horizon Convention Center on Wednesday, April 25, 2018.

The major theme of the Mayor’s presentation was: “Moving Forward With People, Places, Partnerships and Possibilities.” Kamrein Jackson, Muncie Boys & Girls Club “Youth of the Year” was emcee for the event.

Mayor Tyler kicked-off his presentation with a newly produced video featuring the history and positive attributes of Muncie. The video depicted how the community keeps moving forward.  The video was produced by Roger Overbey, written by Terry Whitt Bailey, and narrated by Steve Lindell. The new video can be viewed below.

Here are some highlights from the 2018 State of The City Address.

The mayor said the Muncie Police Department responded to 53,720 dispatch calls last year. Approximately 85% of those dispatch calls report incidents relating to substance abuse. Tyler said, “Muncie is no different than any other city across the country. The drug crisis is off-the-charts. It’s a challenge we have to accept as a community. All our community leaders, healthcare professionals and others need to come together to address this crisis. We can’t arrest our way out of this issue. We have a great community drug task force that is looking at ideas to address the issue. We have programs that are beginning to be developed throughout the community that are dealing with some of these issues.”

The Muncie Fire Department had 7,892 fire runs in 2017. 5,370 of those runs were medical first responder runs. During brutally cold weather, warming stations were established at fire stations across the city, as well as city hall. The mayor said the police and fire departments are continuing to work on the diversity of their forces—introducing new diversity rules for new hires. New policies are now in place to assist in the hiring of Muncie veterans.

The mayor said Muncie Animal Care & Services sheltered 4,577 animals. The division now has a 99.9% “save rate.” In 2017, the Muncie City Council adopted the “Companion Animal Protection Act.” It is the strongest animal protection act in the USA.

“Muncie has always been the most caring and giving community from the very first day we became a city,” Tyler said. “That has not changed. I could stand up here for hours and talk about all the different programs and festivals that take place in our city.” He offered a few examples such as the American Cancer Society’s Relay for Life, Pies for Peace, the Muncie BikeFest, Muncie Mission’s Walk A Mile In My Shoes, United Way’s Day of Action, PrayerFest, White River Cleanup, Muncie Black Expo, Meridian’s Rialzo, the Ironman at Prairie Creek, the Muncie Three Trails Music Series and many, many more.

Since the opening of the Erskine Greene Training Institute opened inside the hotel, 7 graduating classes have gone through the program. The State of Indiana has an overall 82% unemployment rate for those with disabilities. Graduates out of the Erskine Greene Training Institute, have a 74% employment rate. (Employed, not unemployed.)

Mayor Tyler said 35 sidewalk projects are in the works in Muncie. (136 including repaired.)Many sidewalks will be brand new, and others repaired.  Sidewalks will be installed on McGalliard Road to connect some businesses to the Cardinal Greenway.

The mayor explained the pothole situation and how devastating climate change has become to the infrastructure of many cities, not just Muncie. Since January, over 625 hours have been spent repairing potholes utilizing 448 tons of mix. Hot mix, a better and longer-lasting mix was made available to the city on March 15th. Since 2012, the city has rebuilt 179 “lane miles.” 672 alleys were repaired. Road resurfacing currently underway (or finished) include:  Riggin Road, White River Blvd., West Jackson Street, 29th Street, Hackley and Riverside.

A program to replace damaged or missing street signs is also currently underway.

Students take the stage at the end of the State of The City presentation.