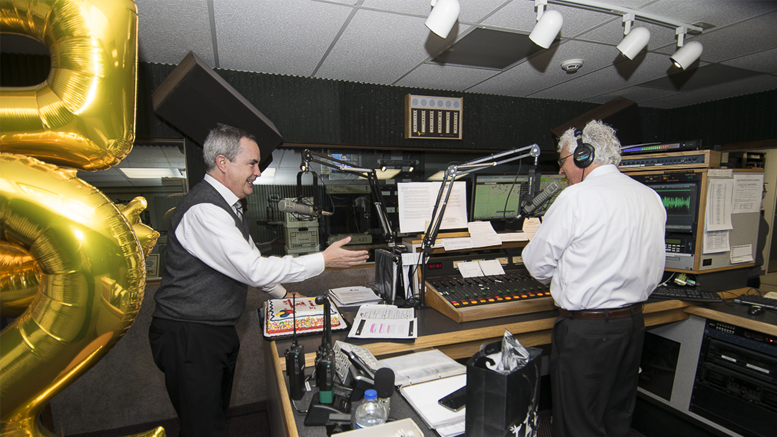 J Chapman, president of Woof Boom Radio, congratulates Steve Lindell for his 25 years of service at WLBC. Two rather unwieldy balloons, (a "2" and a "5") are also pictured. Photo by: Mike Rhodes

Muncie, IN—March 15, 2018 was a special day inside the WLBC studio as station owner J Chapman, president of Woof Boom radio, surprised morning show host Steve Lindell and congratulated him for his 25 years with the station. 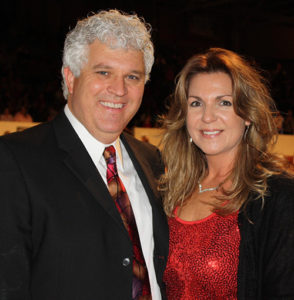 “This is actually a very special day,” said Chapman. “It’s a rare moment because Steve Lindell has been with this radio station (WLBC) for 25 years. That’s unheard of in most ANY company these days, but particularly rare in the broadcasting industry.”

25 years ago, when Steve Lindell was first hired at WLBC, he worked as the program director for WLBC’s afternoon drive. At that time, the station was owned by Jim Davis, Al Rent, Morry Mannies and Dave Smith of DRMS Communications. Jeff Weller was the general manager.

Steve is now vice president and director of operations at Woof Boom radio in Muncie.

Looking back over his 25 years with WLBC, Steve said, “I’ve never been bored, and that’s part of the reason that I really revel being on the radio and working around radio stations.

Technology changes have been a continual factor for the broadcasting industry and Steve recollected dealing with some of them. “When I first arrived at WLBC, we were playing music from reel-to-reel tapes,” he said. “Today, many people don’t even know what a reel-to-reel tape machine is. We were editing analog tapes with razor blade editing techniques, and now it’s all digital computer editing. If I’m producing something and I don’t like it, I just undo my editing and try again. But, 25 years ago, if you cut a piece of analog tape wrong, you’d be in trouble. There weren’t easy do-overs.”

Steve has seen many other technology changes during his career. “When I first came to WLBC we had a one-page website. It didn’t do anything. Now we have Facebook, Twitter, Instagram, Facebook Live, munciejournal.com, high-definition radio and on and on. We are really just everywhere these days, and we have to be tied into these different technological advances.”

Steve was honored to be a board member of the Indiana Broadcasters Association (IBA) at one time. His membership with the organization gave him a better perspective and insight into how the organization advocates for broadcasters on a national, statewide and local level. In 2017, Steve’s efforts landed WLBC an IBA Cardinal Community Service award, which is prominently displayed in the studio.

“My radio career at WLBC has always been about something that resonates in my heart and mind every day— I like to impact people’s lives in a positive way,” he said.  “Whether it’s a fundraising effort or being involved with local organizations like the United Way, Salvation Army, or Muncie and Delaware County Chamber of Commerce, I believe I, and WLBC, make a difference in people’s lives.

“For example, we had a very serious ice storm in 2005 and the entire community lost power.  Still to this day, I might have a mom come up to me and say, ‘My family was listening on a battery-operated radio during the storm when the power was out. You made us feel like everything was going to be OK.’

“That’s the kind of feedback that keeps me coming back every morning, very early in the morning. I am very proud to work for WLBC and Woof Boom radio, and hopefully will continue to do so for many years to come.”