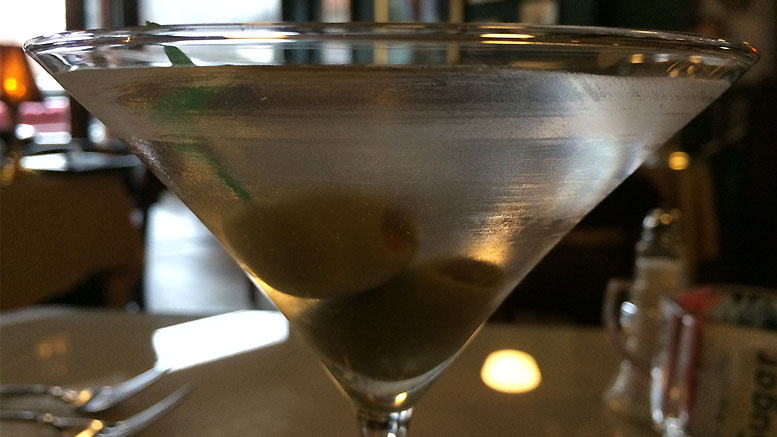 There’s a first time for everything, martinis included. Photo by: Nancy Carlson

Not to say I am an unsophisticated lout or anything, but the first time I ordered a bottle of wine with dinner at Vera Mae’s Bistro, I nearly sent it back.

“Holy crap!” I complained to Kent and Steve. “There’s a cork stuck in it!”

Ha–ha! Just joking. While admittedly a 99 percent wine-from-a-spout guy, I knew that cork was jammed in the bottleneck on purpose. It was with that sort of unfortunate faux pas in mind, however, that the other day on the Internet, I looked up “How to order a martini.” See, I’ve known how to order a beer or a bourbon since outgrowing my last pair of Buster Browns. I have even been known to order them in my sleep.

But having grown up in a decidedly non-hoity–toity household, I had never ordered – let alone drunk – a martini, and was developing an urge to try one.

As soon as “How to order a martini” popped up on my iPad screen, I knew it was fortunate I had checked. That’s because the post warned that nothing would brand me as more of a rube, a bumpkin and possibly even a peckerwood quicker than stammering and stuttering my way through a martini order.

“Know in advance what you want,” the post insisted.

The early part of the ordering process was fairly simple. Did I prefer gin or vodka? For several moments, I pondered their respective martini merits as our Vera Mae’s waiter patiently waited. It wasn’t until he began clearing his throat and drumming his fingertips against his order pad that I finally took the hint and did the eenie-meenie-miney thing.

“Mo!” I cried at last, picking gin. Then, just for the heck of it, I asked the waiter about his ideal martini.

“I’ve always wanted to try half-vodka and half-gin,” he answered with a suavity I could only envy, which momentarily floored me. Martini-wise, here I was on my very first date, and this guy was already a martini switch-hitter.

Then came the first hard part, as the “How to order a martini” post had warned me it would. Did I want my martini “wet”? Well, duh! Heck yeah I wanted it wet! I was thirsty! But as it turned out, wet meant it would have a bunch of vermouth in it, whatever vermouth was. Dry, on the other hand, meant the bartender would barely put any vermouth in it. This raised two immediate questions, the first being, did I like vermouth?

“Beats me, bubba,” he answered.

The second question was WWCD, meaning What Would Churchill Do? A legendary gin martini guzzler back in his day, Winston Churchill was once asked how he liked to see the vermouth in his. His answer, as “How to order a martini” informed me, was “observed from across the room,” meaning nowhere near his actual glass.

Luckily, my martini research had also mentioned that people psychologically prone to avoiding commitment in their lives could order their martini “perfect,” and it’d come out as sort of a vermouth combo. That worked for me.

“Make that perfect,” I barked, without trying to sound overbearing.

So now my waiter knew I wanted a perfect gin martini. Then he asked, “Want that up?”

Dang! I’d forgotten what up meant! I mean, I knew what up meant. It was the opposite of down. But what was up in a martini context? Sneaking a glance at “How to order a martini” on my phone while ducking behind my menu, I was reminded up meant minus any ice in the glass. This was versus ordering it on-the-rocks, which could ostensibly result in a watery, wussy-boy martini.

“Up, of course!” I replied, wondering what kind of downer this waiter took me for.

Then, remembering the martini-ordering scenes in every James Bond movie I’d ever seen, I casually volunteered the line that at last would mark me as a man of danger, action and intrigue. Either that, or mark me as a man full of the second word in the second paragraph of today’s column.

Which pretty much left only my martini’s garnish to be determined. I chose olives, which to me, along with prunes and Milk Duds, make up the fifth major food group. In these anything-goes days, however, anything goes. Thanks to “How to order a martini,” I knew my garnish could also be a twist of lemon, or even a carrot, a radish or a pickle, should I so desire. And if that were true, let’s face it, folks: It could also be a Tater Tot.

Anyway, my martini soon arrived and it tasted good, not that I had another martini to compare it with, this being my very first one and all. As for future comparisons of my old standby bourbon to gin martinis? Let’s just say I don’t think Pappy Van Winkle need worry about me ditching him for that Beefeater guy in the funky red tights.

A former longtime feature writer and columnist for The Star Press in Muncie, Indiana, John Carlson is a storyteller with a unflagging appreciation for the wonderful people of East Central Indiana and the tales of their lives, be they funny, poignant, inspirational or all three.