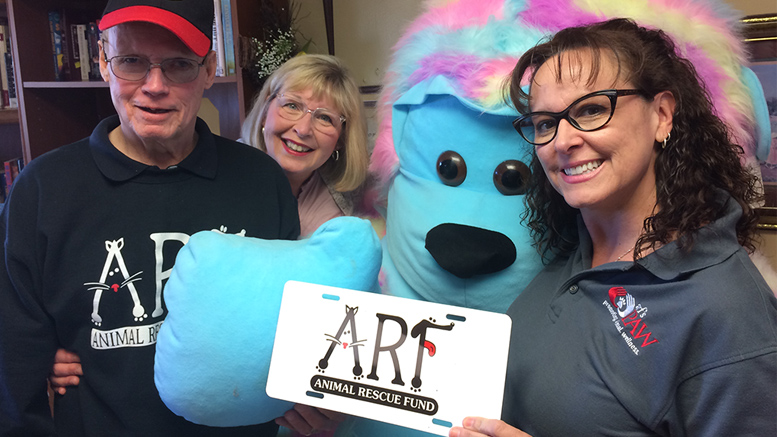 What a change the last 19 years have made for him.

“We are blessed to have an organization like this,” said the man who heads the Animal Rescue Fund’s Thrift Store, also known as the Meow ‘n Mutt Market, at 7600 Kilgore Ave. in Yorktown.

As Workman spoke, he was surrounded by items for sale in this shop, including clothes, books, assorted knick-knacks and a pastel-colored stuffed animal the size of Bigfoot. Inside this colorful place, Workman was also surrounded by the warm feelings emanating from ARF founder Terri Panszi and its executive director, Jody Leddy.

That Panszi and Workman are close is ironic, to say the least. His career spanned years when euthanizing ownerless dogs and cats was a harsh but unquestioned fact of life. Panszi, on the other hand, has never met a dog or cat – or any other animal, for that matter – she didn’t love and was willing to risk life and limb to save. But more than 20 years ago, when she began making regular trips to the shelter with supplies she had bought to brighten the animals’ lives, Workman enthusiastically welcomed her.

“Before I ever walked through the door of the shelter, Gale would come to my car while I waited outside the gate and get the things I would buy every week,” Panszi recalled. “He was so kind. He had a hard job to do, and he did his job. But he always cooperated with me.”

The problem was, for the longest time, she just couldn’t force herself to step inside the shelter’s gate to face the heartache she knew she’d find inside. When she finally did so, however, her animal activism quickly ramped up. Before long, she was running outdoor adoption events for the shelter, and she and Workman were hosting a public access television show to promote them. And then, 20 years ago, Panszi founded ARF.

It was a year later that Workman took up his post at the ARF Thrift Store for weekly payments of exactly … nothing.

“When I tell people that Gale works full-time for nothing, they don’t believe it,” Leddy said. “They’re like, ‘What are you talking about?’” Besides that, the ARF Thrift Shop’s building is provided free of charge by Paul Holeman. He is the widower of Jackie Michael, the “guardian angel,” as Panszi reverentially calls her, whose financial generosity funded ARF in the first place.

Not that Workman is totally selfless. He will admit that “every once in a while,” he takes a Coke from the store’s cooler. Of course, he’s also the guy who buys the Coke to stock the cooler in the first place.

Open from 9:30 a.m. to 4 p.m., Monday through Friday, the ARF Thrift Store accepts a variety of merchandise to sell. “I tell people the thrift shop is operated, basically, like a Goodwill,” Leddy said. “You can bring anything, pretty much.”

Every cent of ARF’s operation is financed by donations, both of funds and, in the ARF Thrift Store’s case, sellable merchandise. Sale items on any given day might include some catchy signs, like this gem: “Dogs welcome. Children must be on a leash.” Depending on recent donations, there may be furniture for sale. Lawn-care equipment. There might also be electronics.

Kyla and Dave Bartle are friends of Leddy. As an IT guy at Ontario Systems, when the company upgrades its laptops, Dave refurbishes them before they are donated to the ARF Thrift Store for sale. None of this, by the way, is lost on the bargain shoppers who are aware of the store’s existence.

“We have people that come in here that are just ready, steady customers, people who say this is their very favorite store,” said Workman, a legendary local softball player who was wearing a black ARF sweatshirt and a crisp Cincinnati Reds baseball cap. Two such dedicated customers in the store at the time were a mother and daughter, Karen Cannon and Rosanna Conner, respectively.

“We come in here a lot,” Conner said, while her mother browsed a rack of blouses and tops.”My Mom likes to come in for the great deals, and she gets to support and help the animals. I find some real gems in here, too.”

For other folks, unfortunately, the ARF Thrift Shop is a mystery.

“Many people don’t even know we’re here,” Leddy said, “because we’re physically so removed from the ARF campus on Riggin Road.” Obviously, it’s worthwhile for pet owners to fully understand just what ARF can offer them.

“One thing about ARF,” Workman said. “They’ve got about everything covered.”

That includes veterinary services at ARF’s new PAW (Promoting Animal Wellness) Veterinary Clinic for low-income pet owners, as both Panszi and Leddy noted. Open since October at 3115 West Bethel Ave. (765-896-9224) and run by Dr. Kelley Veneskey, more than 500 animals have been sterilized, and there is a three-month waiting list for surgeries. Veneskey has also performed a host of other procedures, from operating on a dog’s deformed paw and amputations to vaccinations and treating ear infections. The pets’ owners using the clinic must be on some form of government assistance, Leddy specified.

“Our prices are so reasonable that clients can also afford things like flea treatments and heart-worm preventative,” Panszi said, adding that 90 percent of them have never taken a pet to a veterinarian before.

But back to the ARF Thrift Store …

So before they left, Leddy and Panszi, both being shoppers, took a quick look around for themselves. Spotting a funkily-styled jacket on the rack, Leddy bought it. And in further proof that ARF really does have about “everything” covered, Panszi – who like Workman has also never taken a penny from the animal welfare organization she founded – paid five bucks for an attractive plastic tortilla warmer she could have bought for a dollar.

“I need this tortilla warmer,” she explained with a laugh, adding that her husband, physician Jose Panszi, would love it.