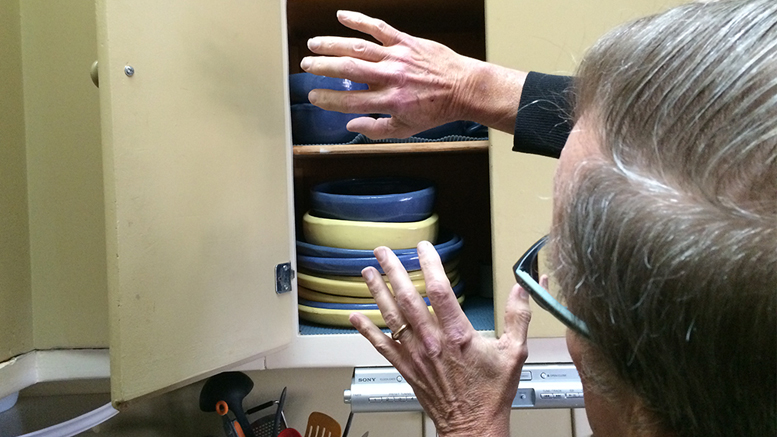 These cabinets are so out of style, they’re scary. Photo by: Nancy Carlson

After 36 years of marriage, I have finally figured out what separates the women from the men, the ladies from the gents, the chicks from the dudes, the babes from the … well, you get it.

Greg, our neighbor and head guy from Richard’s Kitchens, was over recently taking measurements while Nancy peppered him with questions. What about the countertop options? What about improving the lighting? What about moving the microwave housing? What about replacing the cabinets? What about installing a modern Swedish stove exhaust?

Then he asked for my input.

“Uh,” I answered. “What about Harley-Davidson decorations?”

That was it. That was all I could think of.

While he was measuring, Nancy also said something I’d never heard her say before. “These cabinet doors are soooo 1980s.”

And I thought, does that mean they are more likely to malfunction than nice fresh doors? Even worse, are the doors dangerous? Like, could I be walking through our kitchen carrying a snack tray when one of the doors suddenly explodes from its hinges, shattering my kneecaps while scattering my Geno’s Pizza Rolls all over the place?

I dunno. Maybe. It’s just that, for me, a better reason to redo a kitchen would be that you’re forking olives from a jar when the floor collapses beneath the fridge, sending it toppling over onto you. Or maybe your wife’s mixer blows up, and those spinning metal thingees ricochet out of the mixing bowl and knock your sink through the ceiling.

What we’ll pay for this is also a point of contention. Early on, trying to sound like a generous husband and a good sport, I spoke to Nancy magnanimously.

“Now, don’t you worry about the cost, darling,” I assured her. “We’ll spend whatever it takes on this lavish kitchen project of yours … even if it’s as much as two hundred dollars.”

Then Nancy warned me that new kitchens don’t come cheap, and that I should just man-up, shut-up and brace myself for the final estimate. But in the spirit of matrimonial cooperation, she continued, did I want to offer some financial input? Some reasonable level of spousal monetary guidance? Some husbandly fiscal advice?

Except I added a four-letter word after ape, the consonants of which begin with “sh” and end with “t.”

That is because, while I don’t exactly view this kitchen renewal with trepidation, I’m not exactly overjoyed at the prospect either. After all, it’s bound to mess up our kitchen for weeks. If I shuffle out there for some middle-of-the-night chicken wings and get splinters in my feet, will gangrene set in? Sure, I love chicken wings, but … I’m sort of attached to my feet, too. Or what if I’m out there looking for my breakfast box of Hostess Ho-Ho’s and the cabinet they were in the day before is gone?

Has Nancy even thought of that?

But she, as a woman with a new kitchen on the way, is the happiest I have ever seen her. Compared to our wedding day, it ain’t even close. Lately she has been jumping out of bed every morning like Julie Andrews playing that dingbat Maria in “The Sound of Music,” flouncing around the Alps with the mountain goats singing, “The hills are alive …”

Guess I just don’t get it.

That’s not to say I wouldn’t be happy if this kitchen upgrade involved the sort of improvements that would be meaningful to me. Say we ran underground beer lines from the basement kegs at The Fickle Peach to some attractively installed taps mounted on a kitchen wall. For that, I would also hop out of bed and flounce amongst mountain goats.

Of course, the thing I have to keep in mind is that Nancy – who is a great cook and incredible baker – spends a lot more time in the kitchen than I, a guy whose culinary expertise is spent after slapping mustard onto bologna sandwiches.

So I guess we’ll do things her way. As the saying goes, “Happy wife, happy life.”