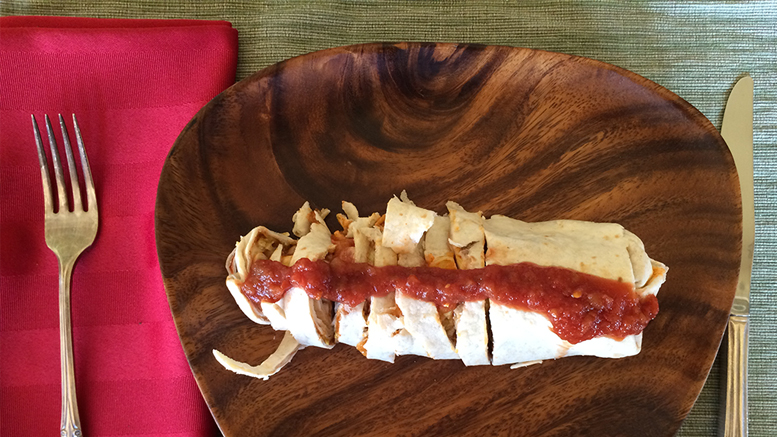 A burrito capped by thickly folded tortilla nearly did him in. Photo by: Nancy Carlson

An interesting thing happened to me the other night.

OK, that’s probably a little too dramatic, a slight exaggeration. But within three or four minutes, had my wife Nancy not been around, I might have drifted up to my heavenly reward. Given my history of good deeds for humanity, that reward is likely to amount to a crappy black-and-white TV set with rabbit ears antennas, so I’m in no rush to collect it.

What happened was, I choked on the end of a fast-food burrito, the folded-up part where its wrapping turns into a thick clump of dry tortilla. That was the culprit. Well, that combined with the fact I’d had three spinal surgeries within a year.  For the second one, my surgeon went through the front of my neck to reach the back. It was a very effective operation, but ever since, swallowing food has sometimes been a challenge.

So there I was at my own dinner table, happily eating my first burrito when, all of a sudden, the bite was stuck in my throat. I mean really stuck. Hard as I was attempting to swallow it, that clump wouldn’t budge. This was a rather serious concern to me at the time, though as a semi-professional humor writer, upon reflection I could see a certain irony in it.

I didn’t suppose a man choking to death at home on a burrito would have rated a story in the pages of my former employer, The Star Press, where I had worked as the food writer known as the Chowhound. But what if it did? I could just picture my smiling mugshot under an obit page headline reading, “Here’s a twist; burrito downs Chowhound.” Or maybe a more alliterative, “Chowhound bites it; burrito blamed.”

Not much of a legacy. Nor could I say that choking to death on a burrito was ever the heroic way I had pictured myself going.

One interesting thing I did learn about nearly choking to death on a burrito is that, while you might hate the game “charades,” you get really good at it, really quickly. With me frantically gesturing toward my neck and my silent lips trying to form gar–gar noises, Nancy immediately read the clues. Jumping to her feet, she yanked me from my chair and began applying the Heimlich maneuver.

From what I understand, by the time the maneuver’s inventor, Dr. Henry Heimlich, died in 2016, he had grown weary of those lifesaving “abdominal thrusts” being named after him. But as a guy whose own name – John – is another word for a place to urinate, I don’t understand why. By comparison, Heimlich’s legacy seems a fine one indeed.

Anyway, after about five seconds of Nancy compressing my abdomen, that now-despised tortilla clump shot out, and I wasn’t even slightly the worse for wear. With hardly a comment spoken, she calmly sat back down and finished her burrito. Me? I unwrapped my second one, then thought to hell with it. I’d had enough burrito for one day.

Later, I began thinking about what might have happened had Nancy not been there. True, our two faithful dogs were also at my side.  Had I passed out and crashed to the floor, I’m pretty sure they would have gone into emergency mutt mode. But I’m also pretty sure neither has been trained to deliver the Heimlich maneuver to humans.

You can, I have since learned, perform the Heimlich maneuver on yourself by repeatedly thrusting your abdomen at a stationary object, such as a tabletop. While I’m not sure how effective that would be, it certainly couldn’t hurt, considering the bleak alternative.

So do I look at Nancy differently nowadays? Actually, yeah. I suppose there are spouses out there who, faced with the same situation and a partner they have serious issues with, might perform the Heimlich maneuver with less enthusiasm than she did. The way she acted like it was no big deal afterward amazed me, too.

But my personal opinion?

Through 36 years of marriage, Nancy has been my wife, my love, my best friend. Now, she’s also my hero.