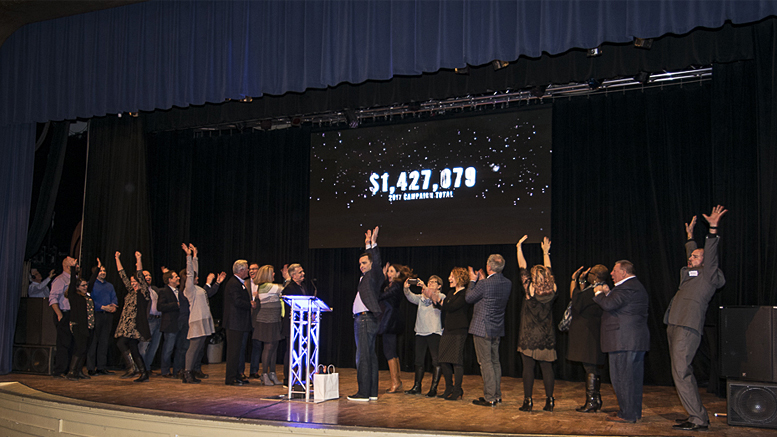 Results of the 2017 United Way Campaign are unveiled as members of the campaign team take the stage at Cornerstone. Photo by: Mike Rhodes

By engaging a broad spectrum of community support to tackle the organization’s long-term goal to end generational poverty, the campaign exceeded expectations in the following key target areas:

Led by high-energy Campaign Chair Casey Stanley, Delaware County’s first third-generation campaign chair, this year’s campaign started with a downtown block party and concert, expanding UWDC’s Kick-Off reach. The concert followed UWDC’s annual Day of Action, which had a record volunteer turnout. The campaign was capped by a final push with a Day of Giving just before Christmas. In a single day, the community rallied to raise just over $17,000, which was matched by another $10,000 from Stoops Automotive Group for a total of more than $27,000. 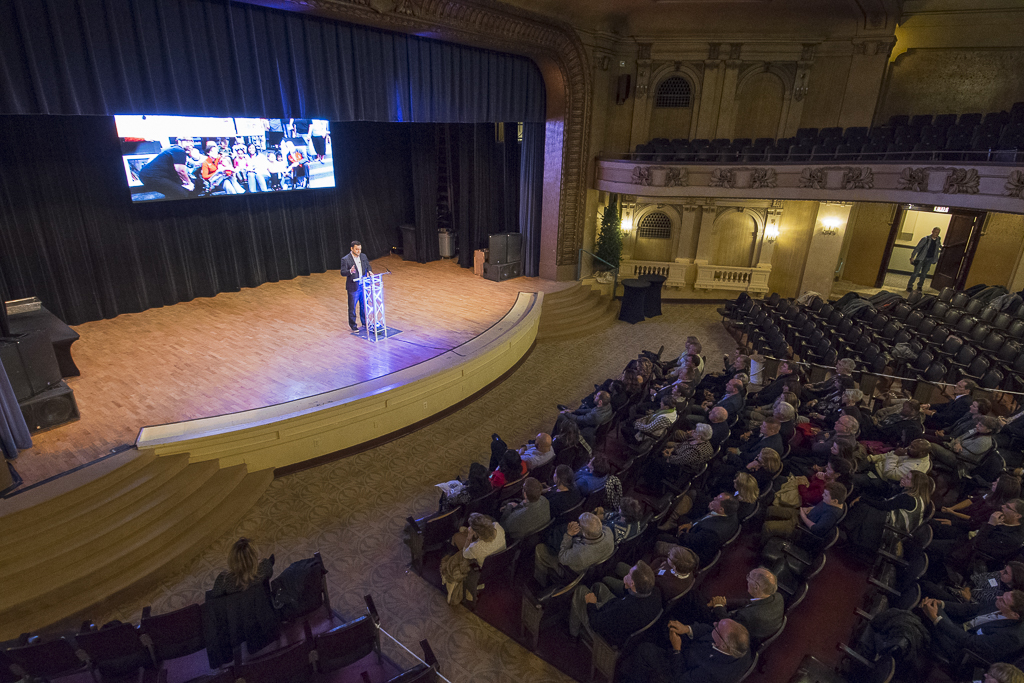 Campaign Chair Casey Stanley presenting at the 2017 campaign results unveiling at Cornerstone Center of the Arts on January 4th. Photo by: Mike Rhodes

“On behalf of the whole campaign leadership team, I am thrilled by what our entire community accomplished. This past year has been humbling and inspiring to us,” said Casey Stanley, 2017 Campaign Chair. “We are grateful to those in years past who paved the way, to those who said ‘yes’ amid busy and full lives, to those who donated little and much to the campaign, and to those whose stories we told, who are fighting for their kids to have better futures.”

Stanley, vice president of products and marketing for Ontario Systems, was also his company’s seventh employee to lead a UWDC campaign—more than any other local employer. Stanley’s grandfather chaired the campaign in 1957, and his father led the effort in 1995. Other representatives from Ontario to serve in the leadership role are Van Smith in 1966, Eugene Amlin in 1971, Bob Holt in 1981, Mike Cox in 1988, and Ron Fauquher in 2001.

“Many say that this community is special, and I’m here to report that they’re right,” said Stanley. “From Day of Action, the Game Changer Reception, and the Kick-Off Concert; to 100 campaign presentations to new audiences; to the one-on-one meetings, follow-ups, and phone calls, I cannot thank this year’s volunteers enough. We accomplished something, United—something far greater together than we ever could have done on our own.”

“Engaging with the CCCC, as well as holding a Game Changer Reception, helped us share United Way’s story with new audiences in an original and powerful way,” Marsh said.

Nearly half of the households in Delaware County are either living in poverty or are one unplanned financial crisis away from it. UWDC has taken a long-term, strategic approach to ending this cycle of generational poverty.

“The fact that giving has risen significantly tells me that our focus on tackling generational poverty is resonating,” Marsh said. “Our community is investing in this cause. We continue to see progress in our work, and these resources will carry our literacy work forward.”

By 2024, United Way endeavors to improve grade-level reading performance among third-graders, a known indicator for future success. Educational attainment is known to have a direct effect on conquering generational poverty. When children are reading at grade level by third grade, studies show there is a greater likelihood of success for children and their community.

To learn more about UWDC’s 2017 campaign, bold goal, and strategies to end the cycle of generational poverty in Delaware County, visit InvitedToLiveUnited.org.