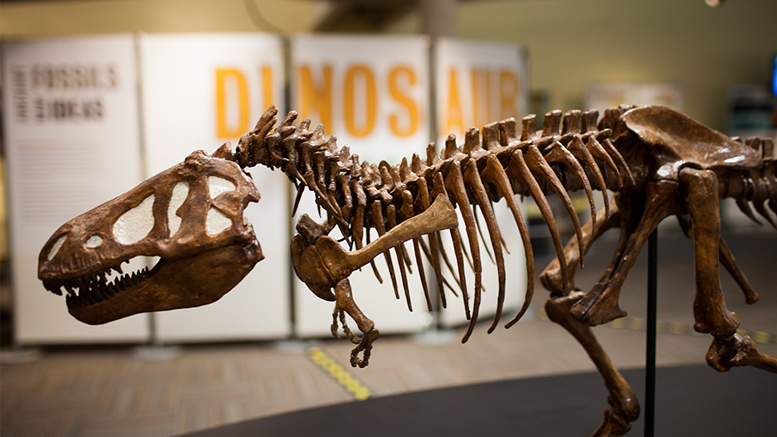 Muncie, IN—Dinosaur Discoveries: Ancient Fossils, New Ideas, an engaging exhibition that reveals what living, breathing dinosaurs were really like, is set to open at Minnetrista on Saturday, February 3.

Using a combination of major fossil finds, captivating computer simulations, and provocative models, Dinosaur Discoveries: Ancient Fossils, New Ideas introduces a dynamic vision of dinosaurs and the scientists who study them. This exhibition examines in great detail recent scientific sleuthing and the array of investigative tools—from bioengineering computer software to CT scans—used by modern scientists to reinterpret many of the most persistent and puzzling mysteries of dinosaurs: what they looked like, how they behaved, and how they moved. It also explores the complex and hotly debated theories of why—or even whether—they became extinct.

“This exhibition illustrates how scientists are using new ideas, new discoveries, and new technologies to revolutionize our understanding of dinosaurs,” says Mark A. Norell, curator of Dinosaur Discoveries and Chair and Macaulay Curator of the Division of Paleontology at the American Museum of Natural History. “Our work reaches across many disciplines involving paleontologists, biomechanical engineers, paleobotanists, and others to showcase how we go about reconstructing the mysterious life of dinosaurs.”

So, drag your dig kits and get ready for a good time! Dinosaur Discoveries: Ancient Fossils, New Ideas and its many themes including: How Dinosaurs Moved, The Liaoning Forest, How Dinosaurs Behaved, and Extinction, opens on Saturday, February 3 and runs through July 29 at Minnetrista.

About The American Museum of Natural History (amnh.org)

The American Museum of Natural History, founded in 1869, is one of the world’s preeminent scientific, educational, and cultural institutions. The Museum encompasses 45 permanent exhibition halls, including the Rose Center for Earth and Space and the Hayden Planetarium, as well as galleries for temporary exhibitions. It is home to the Theodore Roosevelt Memorial, New York State’s official memorial to its 33rd governor and the nation’s 26th president, and a tribute to Roosevelt’s enduring legacy of conservation. The Museum’s five active research divisions and three cross-disciplinary centers support approximately 200 scientists, whose work draws on a world-class permanent collection of more than 34 million specimens and artifacts, as well as specialized collections for frozen tissue and genomic and astrophysical data, and one of the largest natural history libraries in the world. Through its Richard Gilder Graduate School, it is the only American museum authorized to grant the Ph.D. degree, and, beginning in 2015, the Master of Arts in Teaching (MAT) degree, the only such freestanding museum program. Annual visitation has grown to approximately 5 million, and the Museum’s exhibitions and Space Shows are seen by millions more in venues on five continents. The Museum’s website, mobile apps, and MOOCs (massive open online courses) extend its collections, exhibitions, and educational programs to additional audiences around the globe. Visit amnh.org for more information.