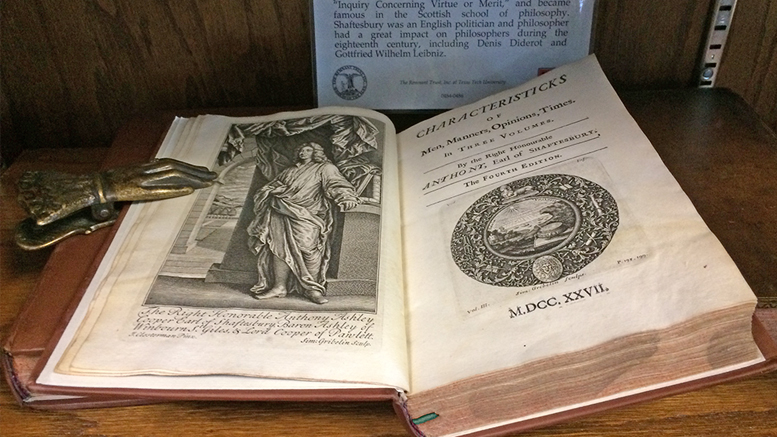 Muncie, IN—For book lovers, it’s like being a kid in a candy store. Make that an intellectually stimulating candy store.

Located on the second floor of Ball State University’s E.B. and Bertha C. Ball Center, the classic tomes of The Remnant Trust are a trove of historic works stored under glass for all to see. Even better, you may lift that glass and take the books into your hands to examine and read.

Of course, there are certain common sense restrictions.

“Don’t be eating Cheetos before you pick up the works,” said Brian Bex.

That’s the word from The Remnant Trust collection’s founder, a resident of Hagerstown and an interesting guy.

“If we need anything in America, it’s a civil conversation with people you disagree with,” Bex said last week in bringing the collection to the E.B.Ball Center, where it will reman all spring semester. The ideas long found in and promulgated by those books are the fuel for weighty discourse.

A large fellow, Bex was casually dressed in gray jeans, a white shirt and a gray tweed vest as he met with a group at the Ball Center. They included BSU President Geoffrey Mearns, Jud Fisher of the Ball Brothers Foundation, economics professor Cecil Bohannon, Chris Talley of the Liberty Fund and Winchester Foundation, which support the trust, and Kathryn Kennison, the E.B. Ball Center’s longtime director. 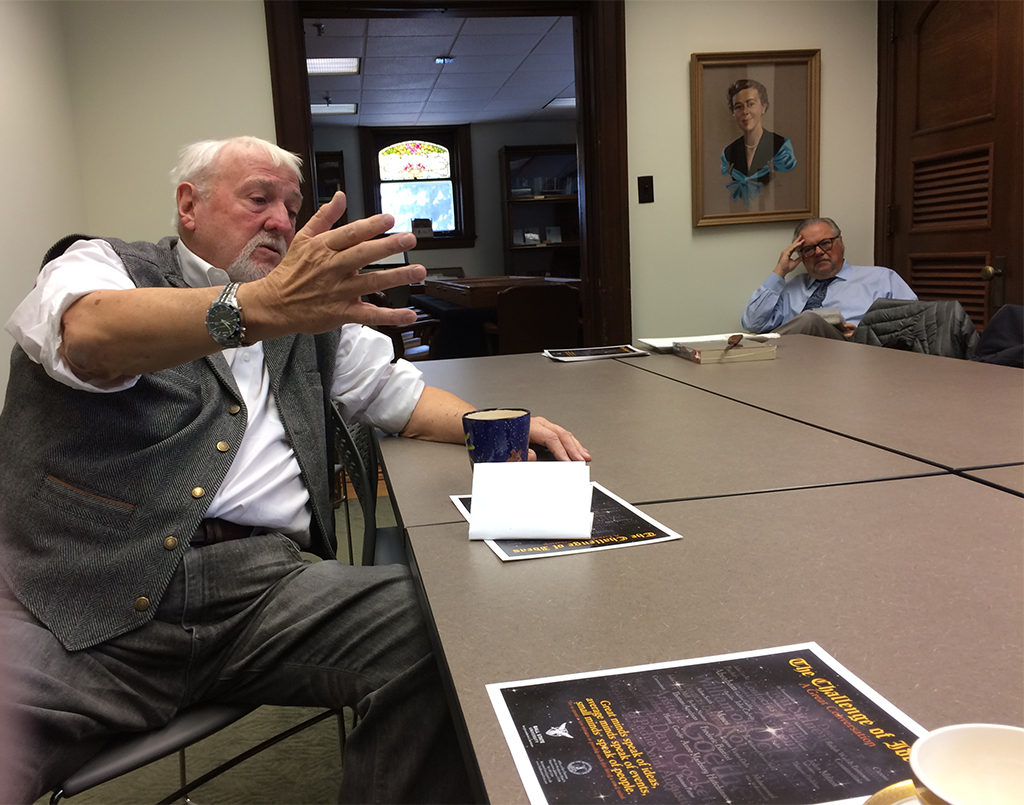 Brian Bex makes a point while talking about The Remnant Trust. Photo by: John Carlson

In discussing the trust’s works, titles like David Humes’s 1748 first edition of “Philosophical Essays Concerning Human Understanding” rolled off Bex’s tongue like favorite “Seinfeld” episodes do for the rest of us.

“Every book in there, he could tell you everything about it,” she said, “and he could quote from it.”

If the trust’s founder also seems a bit of a curmudgeon, he is a funny one at that. He noted he would hesitate to display The Remnant Trust’s precious works in certain scary places in the world where Western Civilization is, say, under-appreciated.

A lack of “cojones.”

Other books available for visitors to personally peruse include an 1841 first edition of Ralph Waldo Emerson’s “Essays.” There is Richard Hooker’s “On the Laws of Ecclesiasticall Politie” from 1622 and Mary Wollstonecraft’s “Vindication of the Rights of Men” from 1790. There is Thomas Aquinas’s “Sumatra Theologiae” from 1496, too, and a Vulgate Bible from the 13th Century.

And remember, you can touch these books without even wearing gloves.

The inspiration for The Remnant Trust came from Bex’s mother, who maintained the only thing that excited college students and professors was old books. Intrigued by the notion, Bex asked a select group of scholars to list their choices for the 100 most consequential books.

“Where there was consensus we wrote it down,” he said. “We went out to try to find those texts.”

Many had been locked away in vaults and private collections, but from the start the goal of The Remnant Trust was to share them with the public.

Why search out these important original texts? It’s a simple matter of historical and philosophical accuracy.

Those masterminds’ original ideas are updated and modernized and otherwise edited over time. Without having the original words to study, we don’t know what those brilliant thinkers really said, wrote, and meant. And that’s not just true of their manuscripts.

Getting riled, Bex noted quotes attributed to Thomas Jefferson that are cut into the Jefferson Memorial had been altered after it was learned a font was too big to fit the intended quote into the available space.

Allowing others to handle these important works helps spread their true thoughts. It also flies in the face of preservationists’ aims, he acknowledged. But for him, that’s OK.

“We want to share the great ideas in the history of man,” Bex said.

As for Kennison, one of her favorite things about The Remnant Trust exhibit is that “when you see those books, what you’re really seeing is the continuity of ideas. Ideas don’t die. Ideas do not die. Nothing really changes, except we get cocky.”

Editor’s note: Visitors to The Remnant Trust MUST plan their visit in advance. Contact Kathryn Kennison at (765) 285-8975.