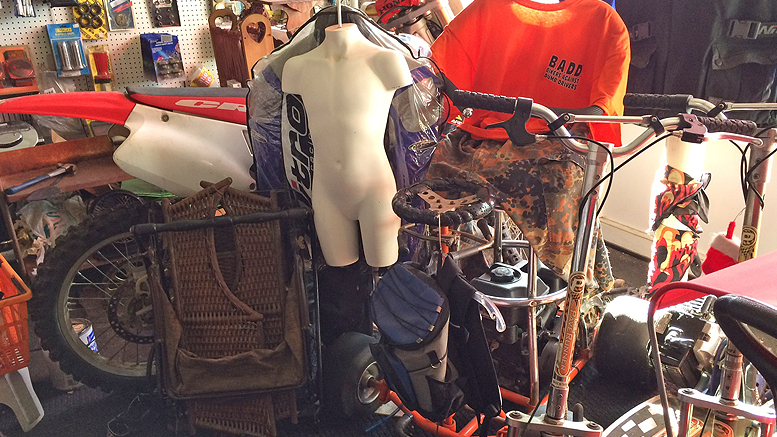 If you are under the misguided notion that playing football is the optimum way to suffer a brain-rattling concussion, you’ve probably never driven an Australian racing barstool.

I, on the other hand, have.

This was due to the largesse of the folks at Lear Unlimited over in Whitely some years back. To certain  people – like most women, I would imagine – the place probably seemed just an odd looking little out-of-the-way shop. But for men? Lear Unlimited was more like Disneyland for guys too old to believe in Mickey Mouse.

Take a turn east off Martin Luther King Jr. Boulevard at Waid, then a short left onto Wolfe, and you’d run into it, a fenced business looking somewhat out of place in an otherwise residential neighborhood. But walk inside and you entered a little bit of hardware heaven. There were lawn-care implements, mowers, barbecue grills, tools and all sorts of cool knives, but those weren’t what made this place so unique.

Want a Russian Ural motorcycle, the design of which had been liberally “borrowed” from abandoned German BMWs confiscated during World War II? Lear had them. You could even get one painted olive drab with a red Soviet star and a sidecar on which to mount a fake machine gun. Was a large open-air trike with side-by-side seating, a raked front end, and a car engine that’d push it to speeds well over 100 miles an hour more to your liking? Lear had those, too. And if moving at a more stately pace with plenty of liquid refreshment handy was more your style, you could also buy yourself a motorized, steerable, rideable drink cooler.

But the most intriguing machine was the Australian racing barstool.

What was it? Picture an ordinary barstool. Now picture four slick little racing tires mounted below, one attached near each of the barstool’s legs. There’s a steering wheel set just above seat-level. Ditto for throttle and brake handles. Finally, picture an engine, and I don’t mean some lame little putt–putter, mounted low between the legs of the stool.

That was an Australian racing barstool.

Anyway, never let it be said that Australians aren’t totally nuts. They are. This is why you can call up these vehicles on the Internet to watch video of folks Down Under racing their barstools on little road courses and tiny ovals. Speaking of “down under,” that is where about 80 percent of the drivers wind up during a typical race, having been thrown from their barstools in the course of competition. Most of them gamely get back on and rejoin the action. A few others just sort of lie there on the track, wishing they were home putting shrimp on the “barbie” while gathering their wits thinking, “I’ve gotta find another hobby, mate.”

As a longtime motorcyclist, I was used to a certain level of risk on the road. So back in my newspaper reporting days I asked if I could take this Australian racing barstool for a spin.   Soon I was hunched over its steering wheel, dodging wayward cats while speeding up and down the streets of Whitely, having a blast on the straightaways. It was the turns you had to watch. With its center of gravity so high, the barstool would practically flick you off without warning.

Writing about the experience, I counted it as one of the most fun days of my lowly journalism career. It was some years later when I found myself back at Lear Unlimited with my good buddy and videographer Lathay Pegues, seeking to renew acquaintances with the Australian racing barstool. The kindly proprietor, Richard Lear, was regrettably gone now, but another Mr. Lear, his friendly son Steve, let me borrow one again.

Unfortunately, things didn’t turn out quite as well this time. This was probably based on that old German adage, “Ve get too soon alt und too late schmart.” Accelerating while turning out of Lear’s parking lot, I made it about 30 feet before I went flying off the vehicle and onto the hard pavement. Worse yet, the whole embarrassing incident – from the Australian racing barstool tipping to my sixtyish-year-old butt soaring majestically through the Hoosier sky – was captured for posterity on Lathay’s videocamera.

But after some stitches in my head and a few days of loopiness, I was back to my old ignorant self, my hunger for Australian racing barstools now sated.

While the shop remains there, Lear Unlimited no longer sells motor vehicles, exotic or otherwise. When I walked in recently, among other things it had lots of holiday items, and Steve’s wife, April, was painting the legs of a table. But nodding toward where a dirt bike was parked at the front of the shop, she pointed out the last of their Australian racing barstools, virtually obscured by other stored items. It was the same one that had thrown me off and it’s not for sale, April said, her husband retaining a soft spot for it.

And that’s fine. I’m probably too old to ride Australian racing barstools now, anyway. If you catch me on a barstool these days, you can bet it’s in a bar, and all I’m doing is drinking a beer, which I suppose is what the inventor of barstools intended.