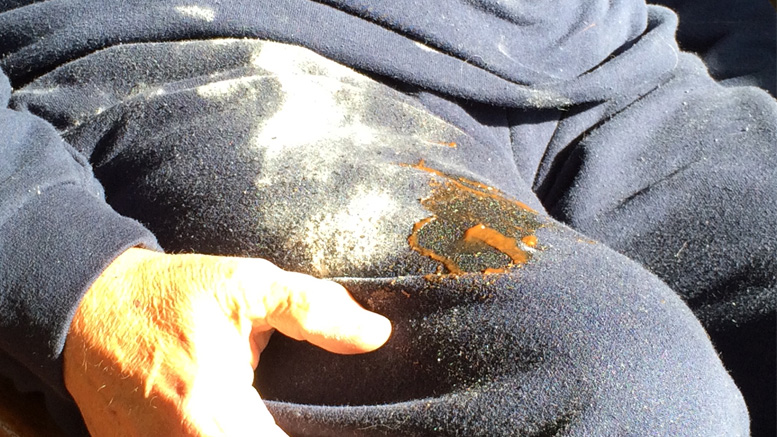 If you’re like me, engaged in that never-ending fight against flab, you know how handy it can be to keep track of caloric intake by simply jotting down notes recording your food consumption.

Feeling a little bloated, but can’t imagine why?

Consulting your notes may remind you that, “Oh! No wonder! I forgot I drove through Taco Bell two hours ago for a Burrito Supreme, a Taco Supreme and three Chalupa Combos!” The problem is that this involves a prohibitive amount of note taking. Plus, if you do this note- taking while steering your car, for supper you may end up biting what state troopers and coroners call “the big one.”

Happily, one morning while out on our rear deck splitting a Concannon’s blueberry doughnut with my dogs, I came up with a solution to this quandary. From now on, regardless of whether eating with my dogs or dining on my own, I shall always wear my ugly sweat pants.

See, I’m not some terribly messy eater. You won’t catch me leaving the dinner table heading off to an important social engagement with spaghetti noodles dangling from my mouth. Nor, for that matter, from my eyebrows, chin or nose.

That would be gross.

On the other hand, I’m not the world’s most fastidious eater, either. Plus, when my wife is away, for convenience sake I tend to wear the same pair of ugly sweat pants for, like, a week at a time.

And this particular week, she was gone!

When I glanced down at my lap after feeding Toby, Jersey, and myself, I was amazed to discover my ugly sweat pants were absolutely covered with hundreds of Concannon’s little dried sugary blueberry doughnut flakes! Naturally I began flicking them off, only to further discover that, far from being sent flying, the Concannon’s little dried sugary blueberry doughnut flakes were sort of smearing themselves into the fabric of my ugly sweat pants!

This really made me think, though at first I don’t remember about what.

Soon enough, my real breakthrough came as I continued studying my pants in amazement, realizing I had just made a major nutritional research advancement! In truth, astronomers don’t look through telescopes any more intently than I was suddenly observing my ugly sweat pants. And just as those astronomers have gazed through millions of light years into the past, I gazed into my culinary past, equally awestruck.

How long , I wondered, had I been walking around with that big yellow mustard splotch? Thinking back, I decided it must have dripped from the braunschweiger sandwich I’d made for lunch two days before.

And over here, what was that dried reddish spot, located just an inch from that dried whitish spot? With a shock, I thought, could the reddish spot be some refried beans from my Pollo Toluca at Casa Del Sol four days ago?  And could the whitish spot be a dab of cheese sauce from my IS Special at Puerto Vallarta the day before that?

Si, amigos, it could.

And that wasn’t the end of my discoveries!

Over here on my ugly sweat pants was a hint of familiar looking peanut butter. Skippy Super Chunk Extra, if I wasn’t mistaken.  Over there? Like some far-off constellation faintly pictured eons away in a National Geographic magazine article about the Hubble Space Telescope, was a dust-like smudge. With a shock, I knew it could only have come from my last handful of Jalapeño Cheddar Doritos.

And over there by my ugly sweat pants’ pull string! Could that be a smidgeon of tartar sauce from the Dill-Crusted Cod at Vera Mae’s, where I had dined recently? Of course, then I thought nah, Nan would divorce me if I wore my ugly sweat pants to that swanky joint. Therefore, it must be a blob of mayo that, unbeknownst to me, had dribbled on my ugly sweat pants from the breaded tenderloin I had snarfed down seven days before during a quaint luncheon at Sparky’s Doghouse.

In fact, there was every bit of this information and more, dutifully recorded on my ugly sweat pants. All I could think as I reviewed a week’s worth of fine dining was, if I bothered to accurately tabulate the calories, what a marvelous dietary tracking device my ugly sweat pants would prove be!

At least until Nancy gets home and freaks out about me still wearing the ugly sweat pants I had pulled on the day she left. Then she’ll toss them with disgust into the dirty laundry, and I’ll lose all that precious data.