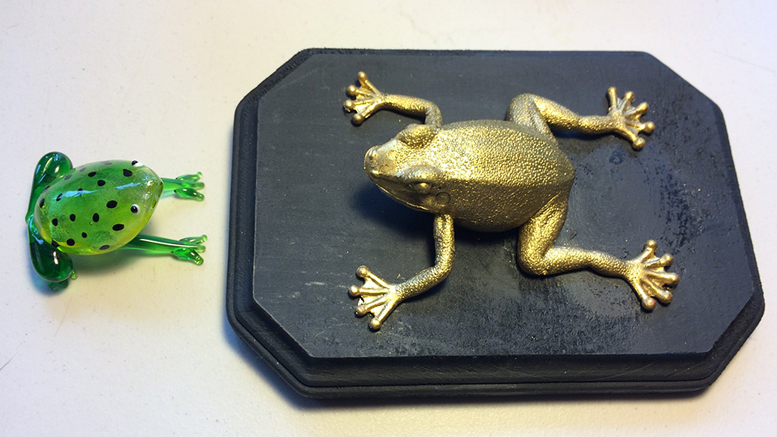 These two frogs remind us to “eat them first.” Photo by: Nancy Carlson

Not long ago, my wife gave me a gold frog.

Well, a gold-colored frog. It’s actually made of rubber, so when you press down on its back and its body gives way, it feels disturbingly like a real frog would, I guess.

This frog is mounted on a wooden plaque wired in back for convenient hanging, but I keep it within sight on the folding table that serves as my desk. Nancy, meanwhile, has a frog on her desk, too. It’s made of glass and colored mostly green, and was purchased one vacation in a restaurant gift shop.

“I must buy that frog,” she insisted, the moment she laid eyes on it.

No, he wasn’t talking about eating frogs’ legs, though I’ve consumed a few and think they taste a lot like – big surprise – chicken. But my wife, being a person who can’t stomach the thought of eating anything that resembles what it looked like when it was happily hopping around, wouldn’t nibble a frog leg on a bet.

What Twain meant was, always get the most unpleasant part of your day out of the way first. Then you’ll be happier as your day progresses.

But in looking back over my life, oddly enough, I see my gold frog as a reminder that I am indebted to frogs for any number of reasons beyond nutritional ones.

Entertainment, for one thing.

For a short while, as my newspaper career at The Star Press was winding down, a tiny aquarium populated with tiny frogs supplied by a coworker kept my spirits up. I had tiny frogs hopping. Tiny frogs croaking. Tiny frogs dating. They also served as a reminder that I didn’t have it so bad in the newspaper business. Under different circumstances, I realized, I could be a tiny frog hopping around in some jerk’s tiny aquarium. Then one day they just disappeared. Where’d they go? On a tiny vacation? Were they frog-napped? I don’t know, but it took a month before I could roll my chair around my cubicle without listening for the sound of tiny frogs being squished under its rollers.

Now I can’t even remember their names.

Then back in high school biology class, it was a frog that served to teach my lab partner and me about life’s limitless opportunities. This was a reminder that in America we could be anything we wanted to be, pursue any career we put our minds to. On the other hand, that frog also reminded us to not be stupid about it, that our career goals also had a little something to do with IQ points. See, even back then, it became painfully obvious there was no chance we’d ever become doctors or famous frog researchers needing to know a spleen from a liver. I mean, all that school year long as we practiced dissecting assorted animals, my buddy mispronounced the word  “gonads” as “gondards,” and of the two of us, he was considered the bright one.

It was hard not to believe our frog had sacrificed its life for nothing.

However, my absolute low point frog-wise came one Sunday evening when my buddies Dave, Tim and I were playing hooky from our Baptist church service, killing time pitching rocks into a wooded ravine out back. We were talking about typical guy stuff – girls, The Beach Boys, girls, hot cars, girls and more girls – when a wayward frog went innocently hopping past. He was probably just heading home to the wife and kids after a long day of doing frog stuff. Maybe his wife even had a nice fly waiting for his supper. But with no real intent to harm him, I casually pitched a stone his direction.

“Oh lordy!” I gasped. I’d clobbered Kermit! It was a direct hit that left him dead as your proverbial door nail. From that very instant I was filled with regret. Later that night, I was filled with even more regret as, in the midst of a troubled sleep, I was haunted by nightmares of big, injured, pissed-off frogs limping after me to exact their amphibian revenge.

Seriously. This is no lie.

So these days, when I look at my gold-colored frog, I have the mixed feelings of a man who is both a frog appreciator and a frog murderer. Mine is about the size of the one I inadvertently flattened, though smaller, as I recall, than the one my genius buddy and I carved up in biology lab. And I still don’t know what to think about the fate of the tiny ones who frolicked for two weeks in my desk aquarium at work before disappearing into the carpet.

But I guess I’m glad my gold one is around, if only to remind me to eat that frog first, like Twain suggested.