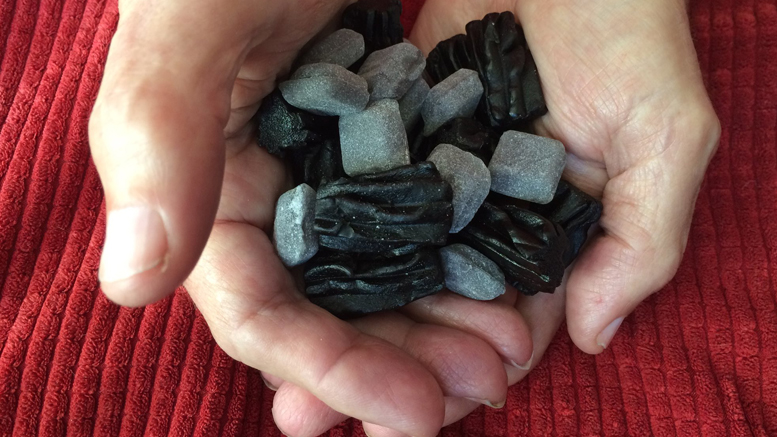 It’s not easy being a black-licorice addict.

See, you might love that stuff, but you never get enough. The reason you never get enough is, the photo above notwithstanding, you don’t always find it on store shelves. Sometimes when you think you have, you must examine it closely, or it’ll break your heart.

This happened to me once. When checking out the Twizzlers area of the candy shelf in a local drugstore, alongside the more common red ones, I spotted a bunch of dark ones and blindly embraced a package, shouting “Hallelujah! Black licorice!”

Grabbing some red ones for Nancy, too, I paid for both, hurried home and ripped mine open. One little nibble later I collapsed, sobbing, into my wife’s arms. It wasn’t black licorice at all. It was chocolate licorice, but colored so dark I had chosen it by mistake, an error I’ll carry to my grave.

So what can we deduce from this traumatic event?

First, I am way overly sensitive when it comes to stuffing myself with candy. Second, I don’t have nearly enough serious crap going on in my life to worry about. Third, in my opinion, chocolate licorice is a culinary abomination on the order of frozen shrimp sticks and head cheese.

“This ain’t black licorish,” I insisted, after regaining my composure.

“You’re right. It’s not licorish at all. It’s licorice,” Nancy said, pronouncing that last syllable with a snakelike hiss.

Now, being a guy who talks about licorish – er, licorice – a lot, this was about the 300th time my wife, a former spelling-bee pronouncer, felt compelled to correct my pronunciation. Frankly, it was getting old. Screeching self-righteously, I began reminding her how lucky she was, not to face the kind of candy shortages and trauma that I routinely encountered as a black-licorice addict.

At that, she fixed me with a look melding pity and contempt.

“Oh yeah, buster,” she spat. “Have you tried to buy a Clark Bar in this town lately?”

At that, my face reddened with shame. What did I have to complain about? Of all America’s most famous candy bars, I knew Clark Bars were Nancy’s absolute favorite. In fact, I had downed several thousand of them in my youth, too.

On certain occasions important to her, like birthdays and anniversaries and such, I had spent a fair amount of  time driving around this city, looking for Clark Bars to bestow upon her, but could never find them.

What was up with that?

I’ll tell you what was up with that. You know those mysterious members of that shadowy cabal who decide the price of gasoline around here? The ones who determine it is going to be $1.89 a gallon on a day when you don’t need any, then bump it up to $2.59 a gallon on a day when you do? The same god-less weasels who keep moving the Steak-Ums around from grocery store aisle to grocery store aisle so guys like me can never find them when we need them? Well, years ago, cackling with evil intent around their bubbling cauldron of smelly stuff, they also arbitrarily decided to launch another diabolical plot.

Why? Beats me, but I haven’t found a Clark Bar in town since.

Anyway, I think Nancy was telling me that, despite her personal candy crisis, she had managed to remain of relatively sound mind without readily available Clark Bars. Her inference was that I could probably get by for a day or two without black licorice.

And she was right, I grudgingly admitted.

Interestingly enough, though, just a week later in an Amish grocery south of here, I found an abundance of black licorice imported from Down Under, of all places. Naturally, this begged an intriguing question. If the New England Confectionery Company can’t manage to get its danged Clark Bars to Delaware County, how the heck do Amish folks get black licorice to East Central Indiana all the way from Australia?

After all, buggies don’t float worth a darn, and I’m pretty sure sharks would be just as happy to munch horses as they are people.

Guess that’s just one of life’s mysteries I’ll have to ponder, hopefully while eating some black licorish … er … licorice.