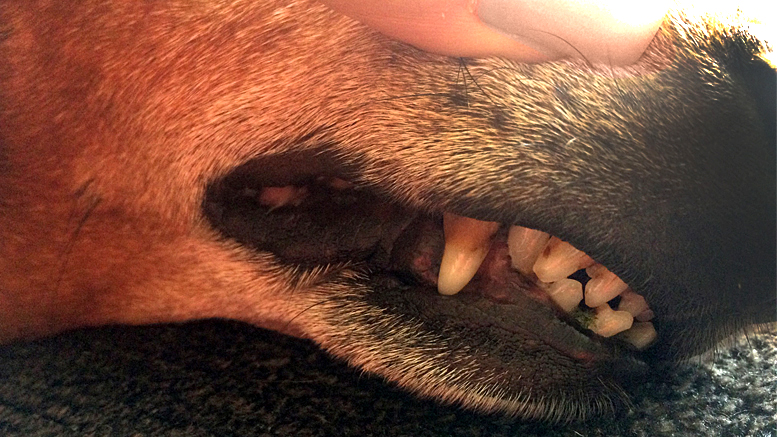 So Nan brings Toby back from the veterinarian’s office the other day and says she has some bad news to share.

“Oh, no!” I scream, hand to my mouth, collapsing on the floor in grief. “How long has he got?”

“He’s not?” I say with relief, removing my hand from my mouth and rising from the floor.

“No. He just needs extensive dental work,” she says, at which point I resume screaming into my hand and collapsing on the floor in grief again.

Having paid for a fair amount of dentistry in my time, I know it doesn’t come cheaply. But I have always taken comfort in the fact that sooner or later, the people I bought dentistry for will likely be the same ones deciding whether the EMTs should give old Dad one last whack with the heart defibrillator paddles while I’m sprawled in cardiac arrest across the buffet line’s bacon tray.

But lately? Lately I’ve realized doggie dental work is becoming more and more popular, and it’s just a matter of time before other expensive dog health stuff does, too. Let’s face it. In many health-related endeavors, dogs have led the pooch parade to the surgical table long before their male masters. My dogs, for example, got vasectomies way before I did.

And that’s OK, including teeth-wise. Lord knows I don’t want our dogs walking around looking like Cujo, the Wolfman or the Hound of the Baskervilles.

Take our first dog, Ro. He was the sweetest mutt ever, but talk about humble beginnings! He’d been born in a hollowed-out Yorktown tree trunk and had the overbite to match. If there’d been a dog role in the movie “Deliverance,” Ro would have nailed it. The day his dental issues became undeniable was when he stumbled into our dining room on his first Thanksgiving, his craggy-toothed gape reflecting all 12 of his canine I.Q. points. One twisted, horrific smile from him and a guest literally leaped screaming onto our dinner table, tossing her lunch plate into the air with such force, her deviled eggs spent the night stuck to the ceiling.

So, yeah, if for nothing besides public relations purposes, I can see the benefits of doggie dentistry and orthodontics, though I question the cost.

What I’m more worried about is where things will go from there.

I mean, if doggie orthodontia is here, can other expensive areas of medical mutt expertise be far behind? Say your pooch’s plastic surgeon announces Rover has a legitimate shot at winning Westminster Kennel Club’s championship except for his deviated septum.

As usual, I scream and fall to the floor.

Half an hour later, my MasterCard still smoking, I’ve learned matching your mutt’s nostril holes is the key to a successful canine modeling career, and have scheduled Rover for plastic surgery so he won’t be ostracized at obedience school by the uppity mutts whose septums aren’t deviated.

But that may just be the beginning.

Say your dog is a Beggin’ Strips junkie, a full-blown, flat-out addict for those fake bacon slices. Oh sure, early on you tried to cut back on them. But by now Bowser’s so broad in the beam, he’ll never again squeeze through his own dog door without one of two things happening. One, you’re either paying for six months of special treatment, or two, somebody is going to have to invent him some remedial device.

Either way, it’s going to cost you cash for dog-butt liposuction, or the emotional toll of picturing your mutt waddling  around the pooch park in a pair of Extra-Hold Dog Spanx.

Frankly, the prospect is enough to make my own prostate act up.