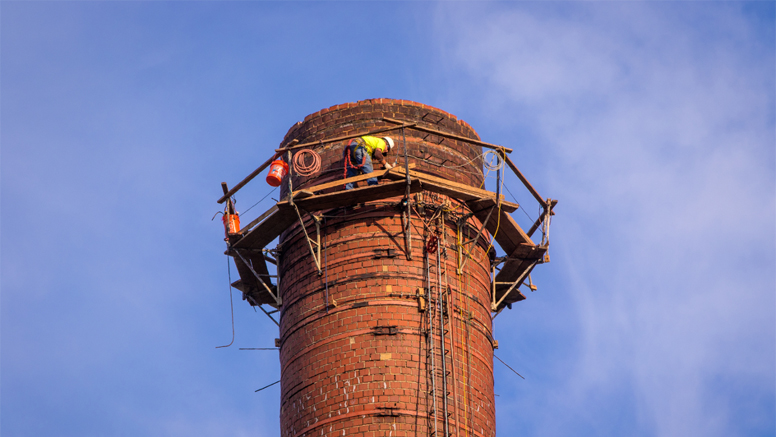 Muncie, IN—Smokestacks — the last vestiges of the coal era at Ball State University —are coming down.

Workers from the Gerald Chimney Company, a St. Louis, Missouri firm, are slowly dismantling the two smokestacks, which were rendered obsolete with the university’s installation of the nation’s largest closed-loop geothermal energy system.

The university began installing the geothermal system in 2009, shutting down the coal-fired boilers used to heat and cool the campus in 2014.

Work on the removal of the stacks began July 26 and should be completed by Aug. 26. The west stack is 180-feet tall while the east stack is 125-feet tall.

The removal process involves workers cutting a hole in the base of each stack. Bricks are then knocked inward from the top of the stack down. When the debris piles up inside the base, workers haul it away, said Jim Lowe, Ball State’s associate vice president for facilities planning and management.

With the removal of the smokestacks, the final stages of the $83 million geothermal project, funded through state appropriations and federal grants, is wrapping up.

Watch a web cam of the stacks coming down

Read more about the project at this link.