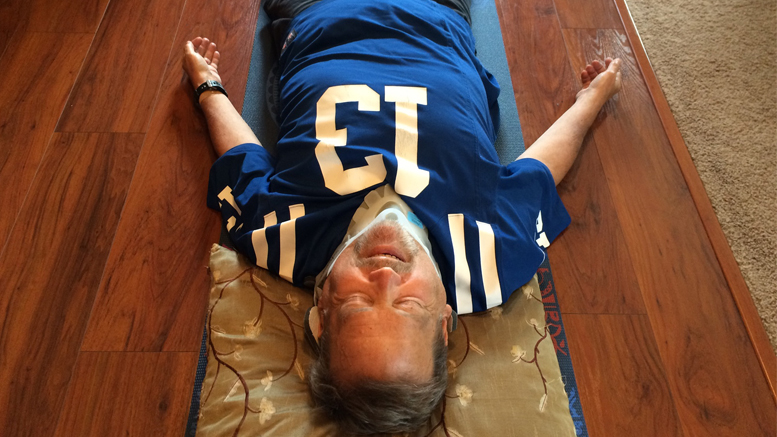 As you may have surmised, The Corpse is so named because what you do is pretend that you are dead. Like with many other things in life, as my wife often reminds me, acting dead is pretty much my forte.

Now, there are countless yoga poses out there, some of such complexity they appear mind-boggling,  or body-boggling, and sometimes even mind-and-body boggling. Most of these have intriguing, exotic-sounding names of Sanskrit origin, such as the savasana. This was good planning on somebody’s part, because yoga would be much less intriguing if it employed common names.

Like, what if the instructor said, “OK, let’s all  do The Snickerdoodle.”

The Snickerdoodle? That wouldn’t cut it somehow.

Indeed, legitimate trusted sources of yoga names and poses are essential to the practice’s continued existence as a means of meditative thought and strength. Given its rising popularity and  the sorry state of the world these days, I wouldn’t doubt if there are unscrupulous juvenile yoga delinquents out there peddling FAKE poses to unsuspecting yoga rookies all the time.

Of course, 10 minutes earlier when the guy was inventing it, he was calling it The Butt Sprain.

So no, it’s better we stick with traditional poses like The Tree,  The Happy Baby, The Mountain and, alas, my fave, The Corpse, which was the first yoga pose I  ever mastered in my yoga career, and is so far the only one.

Not Nancy’s, though. My wife has diligently done yoga for years now. This began back when I used to laugh at her holding those silly poses I would have found far more productive for holding a slice of pepperoni pizza and a Budweiser. Eventually, though, I noticed how much better she seemed to be at doing things than I.

Oh, sure, the differences were subtle at first.

She’d step over objects easier than I. She’d reach for something on a top shelf easier than I. And if she needed to pick up a sock, she would simply bend over and do so. I, on the other hand, would scoot across the room in my underpants,  grab the sock, scoot back across the room in my underpants,  then breathlessly loop the sock over the nearest doorknob, pulling myself  back onto my feet like a mountaineer making a last-ditch effort to crest Mt. Everest.

With nary a thought for her personal comfort, at 67, Nancy will sling full plastic trash tubs under each arm, hurdle our dogs to beat the trash truck to the curb, snatch the grocery sacks from the car heading her way back into the house, wash her hands, design a table centerpiece and arrange me an attractive charcuterie plate for lunch.

All this in the time it takes me to yell, “We got any olives?”

So now I am starting to seriously work on my yoga poses, not that it’ll be easy. But last time – meaning first time – I was gasping, wheezing, sweating, hiccuping, moaning, groaning, belching, and retching. And keep in mind, this was all just tying to land with my tush centered on my yoga mat.

But I’ll learn more, and if nothing else I’ll always have my friend The Corpse to fall back on. Ain’t nobody better than me at playing dead.