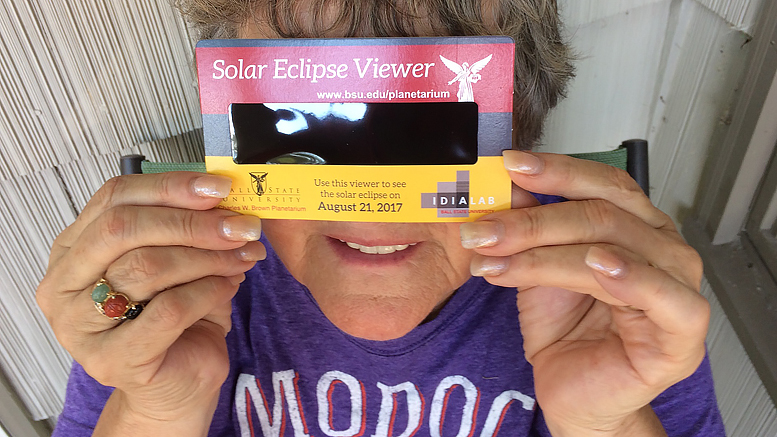 Here comes … er, I mean … there goes the sun. Photo by: John Carlson

One thing you can say about outer space is there’s a helluva lot of it.

This profound observation occurred to me over years of casual star gazing. But a recent visit to Ball State University’s super-cool Charles W. Brown Planetarium left me with lots more observations, not least of which is that movie star Morgan Freeman will never make it as a rapper.

That’s fine, though, because rapping aside, he is his usual dignified, calming self in the short piece “Monsters of the Cosmos,” which the planetarium played the other night. It’s about “black holes,” which I don’t mind telling you are created by dead stars, and not anything to mess with. For you non-space types who didn’t grow up watching Flash Gordon serial reruns, I’ll put the effect of encountering one in layman’s terms:  It would be like our little corner of the universe being flushed down eternity’s toilet.

But don’t mind that. There was lots of other cool stuff that evening. With us reclining in ridiculously comfortable chairs (don’t fall asleep, they warn you beforehand) the outstanding planetarium lady flashed the starry night sky above, pointing out two heavenly bodies representing planets Neptune and Saturn. Even neater, we soon made a simulated pass though Saturn’s rings, thereby avoiding the gruesome space death sure to have have resulted if we’d tried it for real, the rings being formed by countless big chunks of rock-hard ice.

How scary was it? Let’s just say I fought the urge to duck.

The evening Nan and I were there, it would have been a sellout if it weren’t for the fact the planetarium never sells seats. They are always free. Given how entertaining the presentation was, that seems only slightly less mind-boggling than the fact black holes work like giant light-sucking space commodes.

What’s more, the appreciative crowd was silent throughout the captivating presentation. Even the guy seated beside me, who chose to ignore the no-sleeping warning, limited his snoring to the occasional soft, throaty rumble.

The reason most of us were there, I’d wager, was for the main feature, a primer in advance of another great space show, this a real-life one. It’s the solar eclipse due to cross our celestial path the afternoon of August 21. The planetarium presentation, “Eclipse: The Sun Revealed,” will be repeated before then, as detailed on the website bsu.edu/planetarium. The show shares everything the well-informed space geek needs to know about eclipses, beginning with man’s historical interaction with them.

Here’s a fact I found sobering, as a guy who can’t remember how to do long division. Even thousands of years ago I would have been considered math-stupid by the ancient Babylonians, who despite running around flopping underneath their loincloths, figured out how to predict solar eclipses way before pencils were invented.

As you may well know, an eclipse results when the moon’s path blocks the sun. Other ancient peoples, whom I would have been much more comfortable hanging out with, believed it was some giant space version of Godzilla eating the sun for supper.

When the solar event does arrive, its “path of totality,” the most visible path of the eclipse, will move across the United States from the northwest to the southeast. Nearest us, the route includes southern Kentucky, in case you also want to buzz down there on, say, a bourbon run. But even up here in Muncie, according to a planetarium publication, the moon will block 93 percent of the sun’s surface that August afternoon.

As was made abundantly clear in our presentation, you don’t want to watch the eclipse with the naked eye or it may be the last thing you ever see. Don’t try doubling up on your sunglasses, either, because that’s also not safe. Your best bet is a solar eclipse viewer, which the planetarium is selling for two bucks each until they run out.

If you lack one of those or a dedicated pair of eclipse-watching sunglasses, don’t despair. You can always do the old two-pieces-of-thin-cardboard thing. Punch a small hole in one and you’ll see the eclipse shining on the surface of the other piece held below. I can tell you from experience this actually works.

Fresh out of thin pieces of cardboard? Stand under a tree, and the eclipse will show up in the splotches of light on the ground shining between the leaves’ shadows. All out of trees, too?

OK, Mario Batali, grab a colander from the kitchen, and multiple images of the eclipse will show up on a surface held below it, the image shining through its tiny drain holes. Then, when it’s over, carry the colander back into the kitchen and make yourself a fortifying spaghetti dinner complete with chianti, killer sauce and garlic bread.

You earned it, star-gazer!