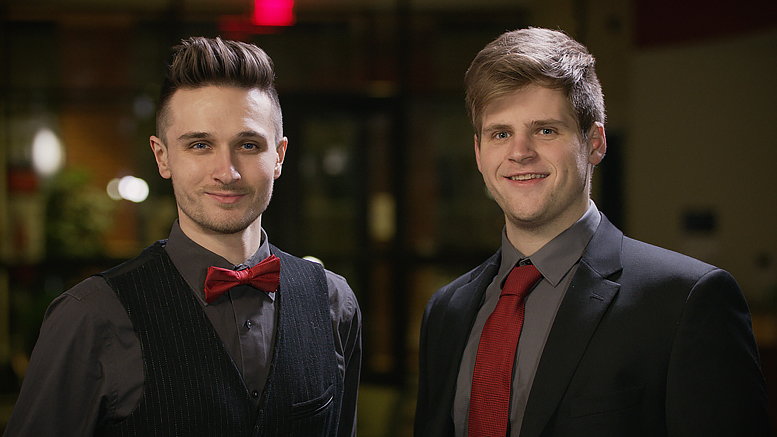 The Rieth Brothers are two young entrepreneurs passionate about telling great stories through digital media. They operate their business out of the Innovation Connector in Muncie, Indiana, creating videos for local businesses and organizations, and producing films for themselves and other artists.

Rieth Brothers is a digital media company that combines both brother’s skill sets. Nick is a 2015 graduate of Ball State University and has been doing commercial video work for the past four years. Patrick is a 2017 graduate of Ball State University in Animation, but his skill sets are many. He creates beautiful work not only through 2D and 3D animation, but also in his digital paintings, story boards, and motion graphics.

Nick Rieth wondered what he was going to do with his life when he began college at Ball State University. “I liked film and that’s about all I knew,” said Nick. He worked in a startup business with a college buddy who had heard of the Innovation Connector. They visited with SCORE, Service Corps of Retired Executives, that provide free business mentoring services to entrepreneurs. SCORE was located in the Innovation Connector at that time.

When Patrick started at Ball State University, the two brothers decided they wanted to merge their talents and make creative things together, including feature films. In looking at a variety of paths to take in order to reach their dream career, they chose to start a business and begin creating and filming commercials. That decision led them directly to the Innovation Connector.

“That’s when we met Ted Baker and he told us about The Big Pitch Competition,” said Patrick. “We ended up winning the technology category.”

(The Rieth Brothers video above is magical. Please watch it and give it time to play for a while.)

The Innovation Connector (IC) is a full-service business incubator. The IC exists to help entrepreneurs succeed by offering resources and support to address their ever-changing needs. The IC is the host for the annual BIG Idea Pitch competition for local entrepreneurs and innovators to “pitch” their business, business concepts, product or invention to a panel of judges from the business and investment community. Competitors have three minutes to talk, or pitch, before a panel of judges

“After the Rieth Brothers won The Big Idea Pitch competition, it was obvious to me that these two young men were special,” said Ted Baker, Executive Director of the Innovation Connector. “At that time, I decided the Innovation Connector would do whatever we could to assist them in growing their business. From there it’s been a journey, step-by-step, of learning and successes.”

“We took [the win] as a sign that we should keep on doing this,” stated Patrick. “Winning the contest gave us a little bit of cash so we bought some equipment, spent a lot more time mentoring with Ted Baker and got some of our very first gigs.”

The brothers also enjoy talking about the work they have done for the Excellence in Innovation Awards the last two years for the Innovation Connector.

In the spring of 2015, and lots of business coaching later, Nick and Patrick bought a company. Ted Baker suggested they move into the Innovation Connector.

“The Innovation Connector has been huge for our growth. Ted gave us a ton of vital help and advice that otherwise we would have missed if we had just bought a small office downtown,” said Nick Rieth.

“The best thing about working with the Rieth Brothers is their ability to learn, or their teach-ability,” added Baker.” They listened and they learned and they were able to gain insight and growth in their business because they were willing to learn from others.”

“Our dream is to move to the West Coast,” said the Rieth’s. “We have a group of creative people that always work together. Recently, part of the group moved out to Los Angeles and found the beautiful paradox of LA is trying to find a place to live.” The creative group re-grouped and decided that the integrity of the creative team, and staying together, was more important than moving to LA.

“We know that LA is the hub of entertainment. We don’t do things arbitrarily. We are taking a little more time in an area that we know, around people and business that we know, to get even better prepared. We are moving to Indianapolis for a year,” said the Rieth’s.

“Ted Baker and the resources at the Innovation Connector did more than help us learn how to start a business, he showed us the possibility of a business,” said Patrick Rieth, when asked about memorable lessons learned.

“When we bought the business and had to go into debt for it, the dream became a reality!” stated Patrick. “What gets me up in the morning is knowing that Nick and I take on the business part of the dream. We’re the ones who are going to make it tangible to keep our creative group together and make a living doing something we love to do AND be with people we really love to work with. And THAT’S the end goal.”

Visit www.RiethBrothers.com to view Patrick and Nick’s online portfolio and follow them on their dream job journey.

Tracy McCormick-Dishman is a local Marketing & Communications Consultant, who writes about her visits to area businesses and agencies. Follow her travels on Facebook,  Twitter (#HeyDish) and MuncieJournal.com