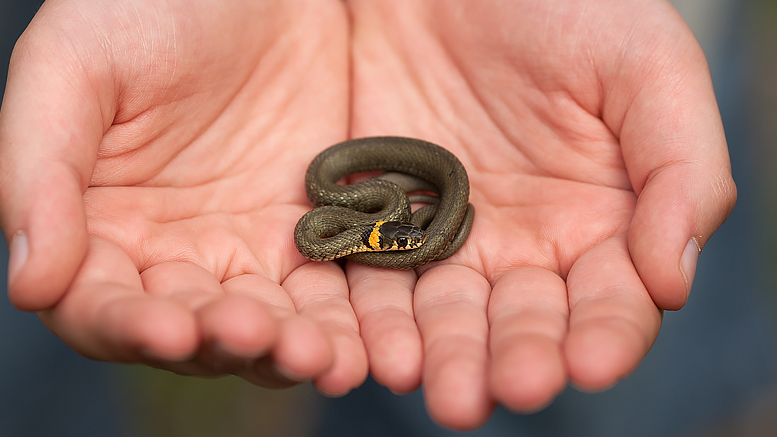 Snakes scare the bejesus out of me.

Not long ago on Facebook I ran into a short video posted by an old newspaper buddy, photographer Kurt Hostetler, that documented him and his boy Owen’s encounter with a harmless garden-variety snake.

What a nice father-son nature moment, I thought.

Inside, though, I was screaming “Mommy!”

My reaction is likely rooted in a traumatic childhood snake encounter. Just eight or nine years old at the time, I was nearly killed back in northern Ohio by a giant python. The only thing standing between me and certain death in its powerful coils was Jungle Larry, leopard-skinned proprietor of Safari Land and a regular on Cleveland’s “Captain Penny Show.” Well, there was Jungle Larry, plus the 30 Junior Jungle Larrys who mobbed the snake ahead of me, each proudly holding up three inches of python for the requisite parental Polaroids. The way I figured it, that snake would have to eat all those kids before reaching me back at the tail.

Taking great comfort in that, I remember thinking this was enough snake interaction to last me a lifetime.

It wasn’t to be, though. Based on the fact we were hellfire-and-brimstone Baptists, who are fine people otherwise, we tended to take snakes a trifle too seriously since that unfortunate  misunderstanding back in the Garden of Eden. Anyway, my snake weirdness was reinforced when our church’s youth group headed off on a weekend camping trip to southern Ohio.

At some point our leader, Kenny, overturned a rock to discover a wriggling nest of harmless snakes minding their own business underneath. While that would’ve made for a cool devotional on the wonders of God’s creation, Kenny instead grabbed a shovel and hacked them to pieces, ironically offering a stark example of the brutal nature of natural selection.

As an ugly introduction to Darwinism, even I thought that sucked for the poor snakes. It also made me think that in the cosmic scheme of things, the snake kingdom probably figured it owed us one.

Unbelievably, it wasn’t long before another snake encounter occurred in the parking lot outside our church.  Noticing a bunch of deacons and other stalwarts of the faith prone on the pavement surrounding a parked car, I snuck a glance to find a little garter snake curled up underneath it. Fiercely fending off threats to grab it, this little guy must have somehow gotten word that Kenny was a member.

In short, he wasn’t going quietly.

What was a hoot, though, was how none of those big guys could ever quite reach that little snake, hard as they acted like they were trying. You know that alligator eating the crispy duck in the Geico commercial, the one whose arms aren’t long enough to pick up the lunch check? That’s what they looked like. Fact is, none of them wanted to be the guy to catch it.

But these and subsequent snake encounters had all been with the non-venomous variety. It took a venomous snake encounter in Yorktown to truly set my nerves on edge.

By now, my loathing of snakes was joined by a dark fascination which drove me to pore over copies of Outdoor Indiana for Hoosier snake facts. In its pages, for example, I learned there were actual cottonmouths in an isolated area of southern Indiana.

Even more fascinating was this tidbit: Copperheads smell like cucumbers. The point, I guess, was if you were out hiking and nature called, you wouldn’t want to – what’s a delicate way to put this? – um, “pop a squat” somewhere that smelled of cucumber salad.

Anyway, my newspaper sent me to write a feature story about a little pet shop here that sold lots of pet snakes in lidded Styrofoam containers. It was run by two rugged guys, both of whom looked like they could whup Grizzly Adams. Having quickly bonded with them during our interview, I was invited to roam their back stockroom alone.

Long story short,  I didn’t realize these guys were Indiana conservation officers, working undercover to bust up the trade in illegal pet sales. My role in this, though unknown to me, was apparently to write the forthcoming story attracting illicit customers. Or maybe they thought I’d stuff an illegal pet snake in my pocket. At any rate, I wandered around the stockroom, checking out the pet serpents, until I came to a boxy glass container and bent low to peer inside.

In a flash, the business ends of two chunky timber rattlers were staring right through me, pink tongues flickering, tails erect and rattling vigorously. Without that thin pane of glass separating us, my nose would’ve suddenly had six nostrils.

Having thus narrowly escaped multiple snakebites and, somehow, the need to go home and change my Dockers, I backed slowly away from the container, told the guys up front bye-bye and gratefully headed back to the safety of the newsroom to write my story.

Haven’t seen a rattlesnake hereabouts since.