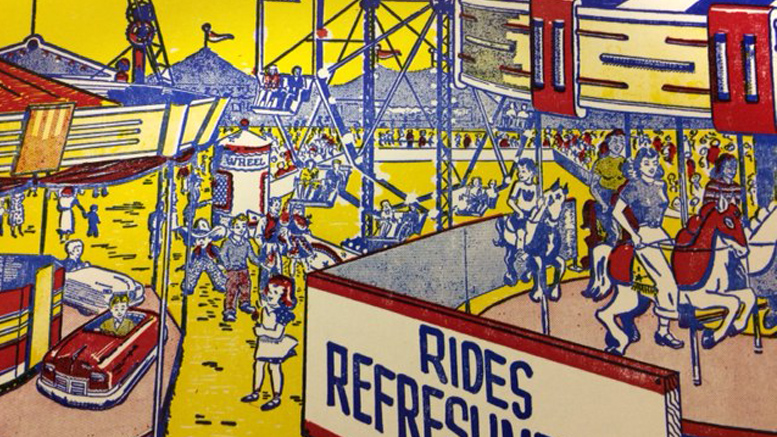 Working at a local carnival not long ago, this being part of a volunteer fundraising effort for the Back to School Teachers Store, reminded me of when I was employed in the amusement park business.

Having just finished college back then, I told myself this job was merely to hold me over the summer until I had time to fully analyze the many offers for more lucrative positions that were bound to come flying my way. Meanwhile, I was probably the only guy in America with a bachelor’s degree who was operating a Tilt-a-Whirl.

Still, I soon developed proprietary feelings for that Tilt-a-Whirl.

After all, I was part of the hairy squad of youthful employees who had assembled that Tilt-a-Whirl, along with the Parachute, the Twister and all the other rides. We’d done this work under the watchful eyes of our cigar-chomping foreman, a mechanical genius. This was fortuitous. Given the state of those mind-altered days, it wasn’t unusual for us to finish building a ride, then have one of the guys reach in his pocket and find, say, a bolt.

Then the foreman would unerringly track down where that bolt belonged. All summer long I nervously waited for one of the Parachute’s cars to detach at the apex of its towering arc, flinging its doomed passengers through North Webster’s nighttime sky and into Freddy’s Funnel Cake stand.

What did happen was within a week or two, I had become an artiste, of sorts, and was playing that Tilt-a-Whirl like its bug-shaped cars were Stradivarius violins with safety bars.

See, if you were a lazy, unambitious, complacent Tilt-a-Whirl operator, you could simply throw the thing into gear and forget about it, giving your passengers a crappy five-minute ride that would leave them bored silly. But me being an ambitious, career-minded, college-educated Tilt-a-Whirl operator, I soon discovered that if you caught a car on the cusp of its pirouette, then yanked the lanyard that gunned the motor, you could keep that car spinning on its track like your proverbial whirling dervish.

So let’s say for example you had a car full of – oh, I dunno – cute females all wearing the flouncy miniskirts so prevalent at the time, which was 1972. You could keep these girls happily spinning and screaming and thinking what an outstandingly entertaining young Tilt-a-Whirl operator you were, all while the gusts created by your trickery sent their flouncy little miniskirts riding up in the air.

Not that I ever did this, you understand.

Meanwhile, as for those cars filled with riders who would have looked ridiculous, sickening or even obscene in flouncy little miniskirts? You just kind of ignored their protestations and let them roll their own way.

Anyway, just think for a minute about spinning around cute girls in miniskirts eight hours a day for a living, while other carnival workers fetched you Cokes and chili dogs on your lunch and dinner breaks. You can see why, when the perfect job for my brand new sociology degree  – manager/trainee for a Frisch’s Big Boy – showed up at summer’s end, I wasn’t all that anxious to end my career as a Tilt-a-Whirl captain.

It was with a sense of loss, then, that I greeted the end of summer. Frisch’s Big Boy? That lasted about six months. Somehow I could never keep my Swiss Misses and my Brawny Lads straight. Manager of men’s wear in a fancy department store followed, until I began regularly flunking the random socks tests to see if mine matched. A transfer to sporting goods came after that, lasting until I drilled a bunch of bowling ball holes that only a king crab’s fingers could have reached. Then came autoworker, laid-off autoworker, airport lineman, bank guard and back to autoworker until I single-handedly crashed the American auto industry.

After that, thank God, the newspaper business found me, though I’d be far too feebleminded and decrepit to  go back to it now.

Tell you what, though, if anybody wants to set me up with a Tilt-a-Whirl out back, just take your seats, ladies, and hold on tight.