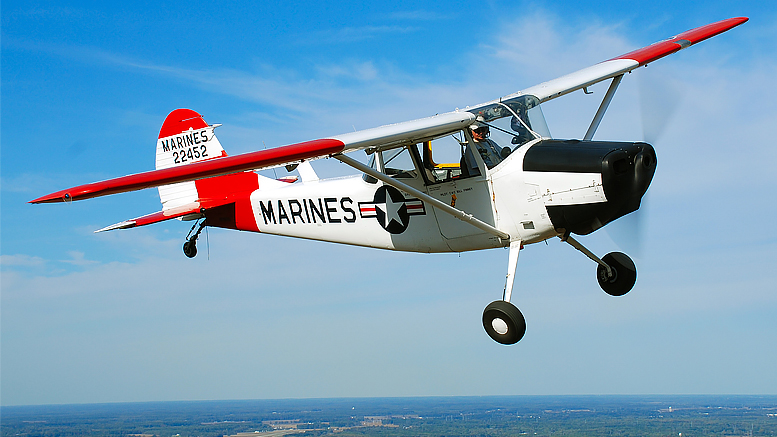 There’s nothing like recent spinal surgery to make crawling in and out of small airplanes a big challenge.

It was a glorious spring afternoon two weeks ago when I received a phone call from my friend Bill Finney, offering me a ride in his beautiful warbird – a classic Cessna L-19 Bird Dog, such as was used for the risky job of artillery and air-strike spotting during the Vietnam War.

Bill had been offering me this flight for years, and somehow I’d never taken him up on it. It was with great joy, then, that this day, in deference to my ongoing recovery, I mounted a conveniently placed stepladder and sort of plopped into the Bird Dog’s back seat. Strapped in with four-point harnesses, we were soon taxiing for take off.

Now, Bill being just a few years older than yours truly, I like to think of him as a youngster in the prime of life. The fact is, though, neither of us is what you’d call a “spring chicken.” Still, having been navigating the skies since he was a mere lad of 16, he flew with the grace of a bird, and I don’t mean a chicken, spring or otherwise.

This came as no surprise, though.

Back when I was consumed with deciding whether to play a Doors or Grateful Dead album next, Bill was flying for the Army in Vietnam. A mere kid, really, he piloted a military version of Beechcraft’s King Air, an impressive hunk of twin-engine airplane. With a co-pilot and two radio operators filling out his crew, he patrolled the Ho Chi Minh trail at night, intercepting information about Viet Cong troop movements.

Ask him about these missions and he says they were no big deal. Ask me? OK, if he says so, but I’m not so sure.

Painted white, black and red, Bill’s Bird Dog has Marine Corps markings. While he’d rather it reflect his Army service, the paint scheme has lasted too well to just up and repaint. Inside the cockpit there are no fancy appointments like padding, sound-proofing, sick-sacks and stuff. This is obviously a working-class airplane, which is the kind I like best.

What it does have is a spectacular view.

Breezily flying along with the right window open, looking downward revealed endless flat miles of East Central Indiana. Sleepy towns. Cows placidly standing in fields. Shimmering backyard pools the color of turquoise. Bill even circled my house, offering me a bird’s-eye view of my back deck where, fueled by the occasional bourbon, I sometimes share quality time with passing clouds.

But for me, the best was yet to come.  Though I rarely get to fly airplanes anymore, there is an old commercial pilot’s license tucked away somewhere in my wallet. Being the nice guy he is, Bill turned the Bird Dog’s controls over to me ensconced there in the back seat, affording me 20 lovely minutes of slow, graceful turns over the verdant Hoosier countryside.

You want a peaceful, easy feeling?  It’s kind of what the Eagles sang about.

In flying it, though, I couldn’t help but think about the artillery spotters and others who flew Bird Dogs like Bill’s while being shot at. Then there was my buddy John Bultman, whose first nerve-wracking mission as a Marine courier in Vietnam was in one. After all, this bird only cruises at about 100 miles an hour, and I don’t think they were equipped with much, if anything, in the way of armor or armament. Loitering low over enemy territory in this little thing?

All too soon we were heading back to the airport, where Bill – who returned to civilian life as a railroad conductor – set the Bird Dog down as light as a feather, notwithstanding some challenging wind conditions.

Then the hard part of the flight began: getting my temporarily crippled butt out of the back seat.

See, exiting an airplane should be done with a certain savoir faire, a certain pizzazz,  just in case any good-looking ladies are watching. Bill, therefore, bounded from the cockpit like a kid. But the fact is, my lower extremities don’t quite work like they should yet. Consequently, he and I heaved and ho’ed, tugged and pulled, bent and spindled and mutilated, all with me still wedged, gasping and groaning, between the side door opening and the rear seat’s right rudder pedal.

Truthfully, beached whales have been dragged back into the surf with far less effort than getting me out of that Bird Dog was requiring. As a person who is easily discouraged, I was beginning to contemplate spending the night in the airplane or worse, engaging the services of the Muncie Fire Department. Bill, I knew, would not take kindly to seeing firemen approach his beautiful airplane with the Jaws of Life.

Then I thought, wait a minute. He’d probably look at me, then tell the firemen, “I’d take off his feet first, fellas.”

This was all the incentive I needed to come up with one final gargantuan tug and push. Just like that, I shot through the doorway with the POP!!! of  a recalcitrant champagne cork, or a way overdue and overweight  baby. Finally, I touched ground.

So in the end, was my flight in Bill’s Bird Dog worth all that work, sweat and humiliation?

Of course, I can’t speak for him, but for me? Heck yes!