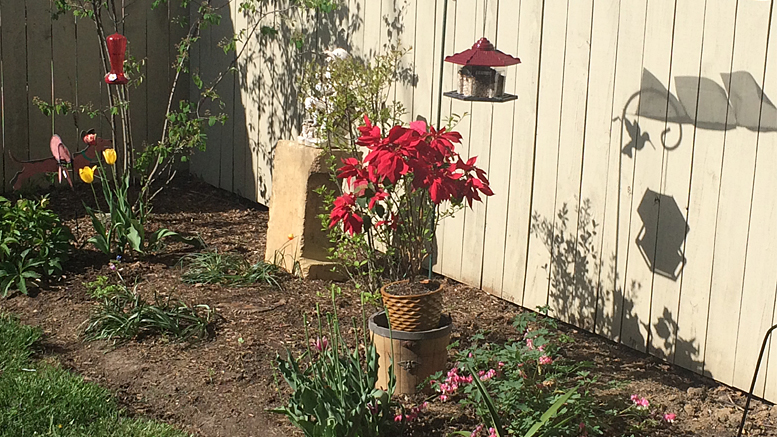 Until I’m doing handstands and cartwheels while rebounding from a couple inconvenient back and spinal issues, my world seems a pretty small place.

It’s not a bad place, though.

There’s my house, which is airy and open and easy to get around in, plus there’s a pretty nice summer sausage in the fridge. Then there’s the garage where my Harley pines away its days, awaiting my return to the saddle. After 40 years of riding, I can’t face a garage without a motorcycle parked in it. There’s my “man cave,” chock full of favorite books and mementoes, like my Blanton’s bourbon cork stoppers with the molded pewter race horses on top.  There are also snacks, such as chocolate bars and licorice pieces that power me through the exhausting business of column typing.

I had a bag of delicious beef jerky out there, too, until the other day when my dog Dandelion picked up its scent, rooted around my desk to find it, then ate every last bit.

That mutt and I still aren’t on speaking terms.

But back to my little world … There’s also my rear deck overlooking the back yard, where we planted our “birds, bees and butterflies” garden last year, the southwest corner of which grows more verdant by the day.

At one time I’d have never thought it possible, but much can be said for watching spring come to bloom when you’re temporarily butt-stuck in a cheap deck chair. At this point we’re certainly attracting bees, including docile carpenter ones which look big as drones and are slightly scary. We’re seeing the occasional butterfly, too. Nan’s poinsettia, red as a stoplight, is out there going on three years old. That’s one hardy plant if even the Carlsons, notorious greenery murderers, can’t kill it. Tulips are popping in yellow, orange, purple and pink, while the serviceberry tree’s leaves have gone from cotton-like to green. Anemones in multiple colors are also blooming, as is our bleeding heart. A bumper crop of chive is coming in, too, destined to decorate the sour cream spooned onto baked potatoes.

Meanwhile, our little statue of a farm boy fishing sits out there on a rock, bent wooden pole in hand, patiently waiting for his bobber to bob. Within spitting distance of him, the robins are making good use of our bird bath.

Floating over it all, as if in celebration, is our string of colorful Tibetan prayer flags.

Beats me why I enjoy these flags bobbing out in the wind so much, but I do. It’s not like I’m a Buddhist. However, I’ll admit to sitting alone with the huge Buddha statue in BSU’s Owsley Museum of Art one afternoon, enveloped in uncommon serenity.

Feeling tense about nuclear war, a pending IRS audit or Muncie’s woeful lack of killer barbecue? You should visit it sometime.

Still, my lifetime religious journey has been Christian Protestant, pretty much walking in lockstep with my major female influences. There was Mom and my conservative Baptist era, before a six-year foray into United Methodism. But the last 35 years it’s been all Nan and Lutheranism. This has been my overriding favorite, and not just because Martin Luther, bless him, drank so much beer. Nevertheless, were Nan to ever boot me out of the house – God forbid – and a sympathetic Hindu lady take me in, I’d probably wind up walking around with a dot in the middle of my forehead.

The dot’s called a bindi, by the way.

But no, the red, yellow, green, white and blue flags are mostly just a pleasure to the eye, a wind-whipped look that somehow evokes youthful days of kite-flying. On the other hand, should the prayers printed on them help keep a Sherpa surefooted in the Himalayas or bring some hardworking Tibetan farmer a brand new yak, so much the better.

Anyway, at this point we are happily anticipating the arrival of our special guests, the hummingbirds, to resume the natural party we so enjoyed last year. Nan says the busy little beauties are due in May, so they’re likely en route now.  Beyond that, we await only the labor of our gardening maven Mary Beth Lambert to coax even more blooms from the ground to complete my personal retreat. It’s a daytime show that’s a heck of a lot more edifying than anything found on television.

As for nighttime? Contemplatively sipping a beverage from Kentucky is a fine way to watch the moon glide by, along with Jupiter, Saturn, Neptune and maybe even Mars.

Guess my world’s not so small after all.