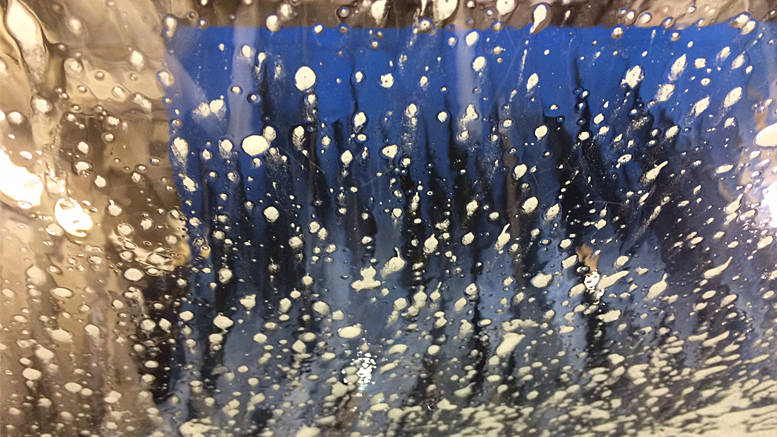 A carwash is awash with excitement. Photo by: Nancy Carlson

You know your life lacks excitement when the wildest thing you do all day is drive through the carwash.

We did this yesterday. With Nan behind the wheel, I coached her into Clancy’s tire tracker gizmo, offering helpful hints like “Left,” and “Right,” and then “A little righter,” and finally “Geez, woman, not that far right! Open your eyes, why don’tcha?”

I know she appreciated my help, because she began flipping me the coveted “You’re the World’s Number One Husband!” sign.

Naturally, my heart beat faster as the soapy swishy twisty things began snaking their wet way across the hood with a rhythmic gelatinous sound, then over our windshield, temporarily obscuring my vision.

“Woo-hoo!” I hollered like some loser whose idea of living dangerously is dodging poop splatters when the starlings roost in the maple tree above his back deck. Which come to think of it …

Anyway, suddenly through the sudsy windshield, the festive green lights signaling the applications of wax and undercoating came into view. We both knew what was coming next. “Wheeee!!!” I screeched excitedly as the rinse water flooded over us. “This is exactly like whitewater rafting!!!”

Which, upon further reflection, was a slight overstatement. Nan and I and some church friends had actually been whitewater rafting before in Colorado, a state where the rivers tend to be far less well-behaved than Indiana’s. Right from the start, I think we all realized this trip was going to leave us puckered enough to pry open pop bottles. It wasn’t so much the speed of the water, though that was a concern. It was more the sight of stretchers, if we needed them, strapped to tree trunks on the banks as we floated past.

Still, we were having a high old time whipping by boulders and spinning like a Tilt-a-Whirl in the current when our young helmsman let us in on a dark little secret: Seems our raft, which was probably 15-feet long, had a leak that was making it hard to steer.

Nearly impossible to steer, in fact.

Still, the extraordinarily slow, relaxed, non-panicky way this college-aged youngster explained our predicament kept us all calm. It wasn’t too long, though, before we began to suspect this kid had gotten a 10-year jump on celebrating Colorado’s legalization of marijuana.

At any rate, the water only got faster and the ride rougher. When we began slamming into rocks that other rafts were steering around, we Lutherans began popping out like the little critters in a Whack-a-Mole game. You’d be screaming words of encouragement to the person beside you, flash them a thumbs-up and suddenly they’d disappear.

Meanwhile in the back of the raft, our skipper – Captain Zig-Zag – was shouting out words of comfort and advice like, “Whoa, dude!”and “Hey, man!” One’s only defense was to hold on for dear life, but nobody could hold on that tightly for that long. As I recall, there were probably 10 of us in the raft, and every one of us eventually bounced into the river.

As with the others, my turn came as a total surprise. One second I was riding this juggernaut alongside Nan and the next I was staring eye-to-eye with a startled trout. On the brink of losing consciousness and with the sobering realization that I was facing eternity, I remember praying, “Please, God, if someone’s gotta die on this trip, could you make it somebody else?”

And then, miraculously, God yanked me back into the raft.

Well, actually it was God in the form of my musclebound buddy John Pinckney, a guy who generates testosterone like I do Snickers breath. Grabbing me by my lifejacket, he hauled my flaccid, gasping form back aboard with one fluid motion, thereby saving my life and our river guide’s tip, meager though it eventually proved to be.

As for our recent ride through the carwash, it was pretty exciting, but I never worried about drowning.