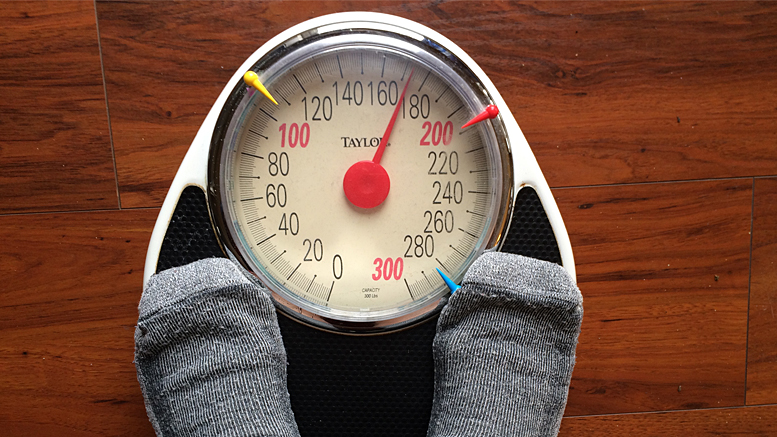 Bathroom scale’s loss is ours, too. Photo by: Nancy Carlson

Spring is here and summer is on the way, along with the promise of sunny days spent wearing Speedos and bikinis at poolside parties and beaches.

Regrettably, it is also time for some of us to shed those pesky 60 to 70 pounds of rippling, gurgling blubber that somehow snuck up on us over the winter. Afterward, we can once again seductively waddle, er, walk the sand like the Girl, or even the Guy, from Ipanema, without sinking in it up to our kneecaps.

There are no carbohydrates in bourbon!

Learning this, I began screaming so enthusiastically Nan thought I had snagged myself on my zipper again. But no, I was simply envisioning following a diet of bourbon burgers, bourbon beans and bourbon blue-cheese balls, all washed down with glasses of bourbon. But then, as she often does, Nan threw a proverbial wet blanket over my celebration by checking bourbon’s calorie count.

So now, I’m just allowed a tiny sip every now and again.

We’re still doing the low-carb thing, though, based on my lack of previous success with other diets. Lord knows I’d try to lose weight by simply cutting back on my food intake while increasing my exercise, but it never seemed to work for me.

There was a time when I’d even make up exercise cadences in my head, pushing myself to excel. But after, say, three days of dieting, they’d all come out hungry sounding, like the one I referred to as my “Pizza Cadence,” which went:

Of course, part of my problem was astronomical in nature. You are probably familiar with “black holes,” those intriguing phenomena in the mysterious vastness of space that are so dense, even light cannot escape them.

Well, some would  maintain the closest thing to a black hole here on earth – at least when I am dieting – is my mouth.

No, no, the gravitational pull isn’t so great that no light escapes it. But it is so great that countless boxes of Milk Duds are inescapably drawn into it, never to be seen again. Ditto for french fries, especially the curly seasoned kind. And how about Hostess products like Ding Dongs and Ho Ho’s?

Let’s just say you don’t want to be standing between me and where they’re racked in the grocery store if I start yawning. My mouth’s gravitational pull could probably run a Suzy Q right through you.

So anyway, a low-carb diet it is. Of course, the disturbing thing is – excluding bourbon, thank heaven – many, many things have carbohydrates in them, so you have to watch it.

When I started this diet, my first thought was, what about snacks? My next thought, naturally, was how about a nice juicy apple? That can’t have carbs, can it? It’s fruit, for cryin’ out loud. Of course, my thought right after that was wait a minute. If apples are so all-fired good for you, why didn’t the  serpent in the Garden of Eden tempt Eve with something far more evil, like Fritos?

Trust me. I Googled it.

So lately I’ve been stocking up on other favorite snack items, like hot peppers, olives and those little white cocktail onions, all of which are low-carb. Beef jerky is OK, too, eaten sparingly. But when Nan bought me some of the black licorice I love, I checked the carbs and about fainted.

What moron put all those danged carbs in black licorice?

Anyway, we live and learn. The question is, do we also need to buy bigger swim trunks?