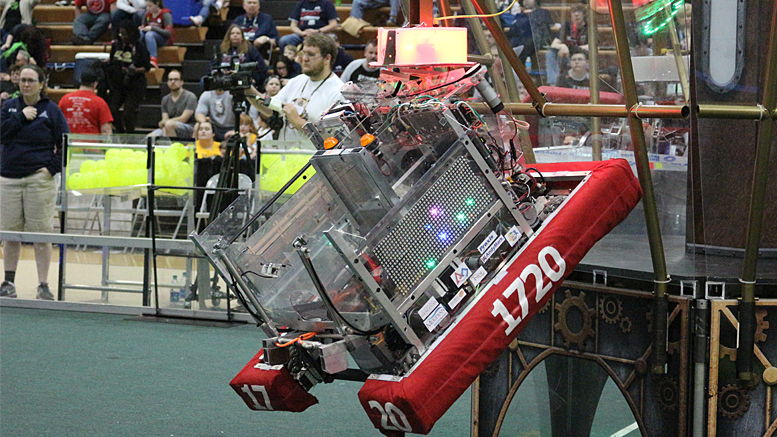 The PhyXTGears robot climbing a rope on an airship tower at the end of a match. Photo provided.

By: The PhyXTGears Media Team—

Muncie, IN— Delaware County’s own PhyXTGears robotics team 1720 finished runner-up at the FIRST (For Inspiration and Recognition in Science and Technology) Perry Meridian district robotics tournament  in Indianapolis, earning the team a spot in the FIRST Indiana State Championship competition in Huntington, Indiana, April 7-8 while competing with their robot, Spitfire.

PhyXTGears is a team of 29 students and 14 mentors who built a robot in six weeks to compete with and against other robots in a steampunk-themed game created by FIRST, called STEAMworks. After their second district event at Perry Meridian High School, the team ranked 4th in the state and is one of only 32 teams to move on to the state competition. The team hopes to earn a spot in the FIRST World Championship competition in St. Louis, April 26-29.

The team also won the Innovation in Control Award sponsored by Rockwell Automation for the robot’s ability to score points during the autonomous mode of the game, which is when the robot must act independently during the first 15 seconds of the game. Their robot is able to place a gear on the airship and shoot 10 fuel balls during this time. 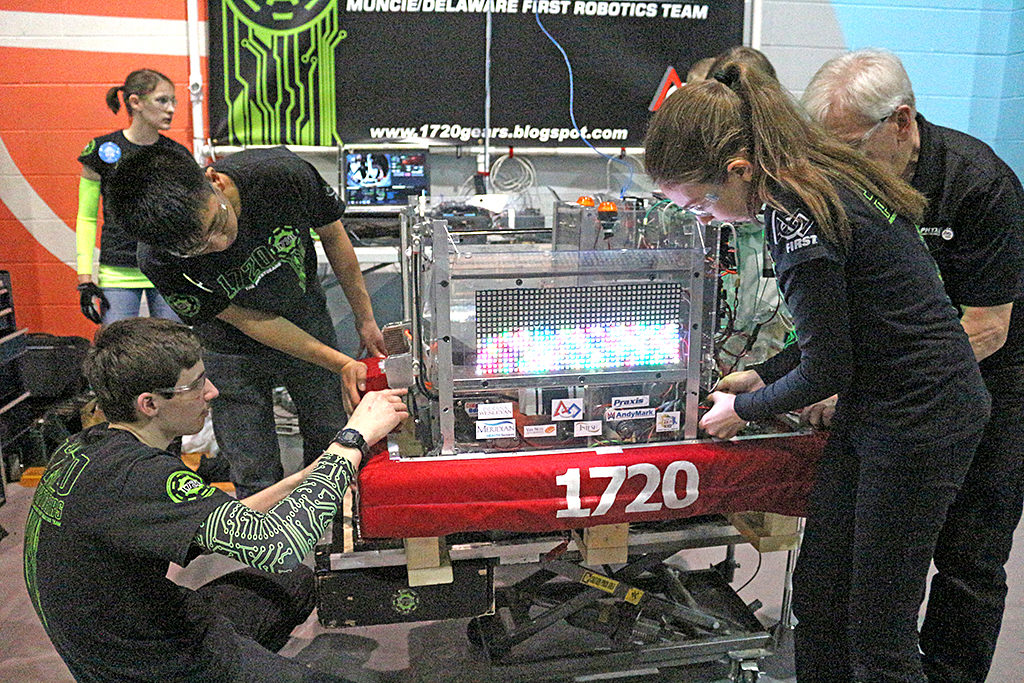 In the game, the team’s robot must collect gear-shaped game pieces and deliver them to a tower on the playing field, called an airship, where human player Garrett Clausen collects the gears and puts them on pegs to spin rotors on the airship. The robot must also collect balls, called fuel, and shoot them into the top of a high container, known as a boiler.

The robot is also widely recognized for its billboard-like “bling,” which is a panel of LED lights the team programmed to show images and messages as the robot performs on the game field. Clausen, a student involved with the team’s programming sub-team explained, “It’s one thing to throw up a pretty picture, but there is all this other stuff in here, too.” The other stuff Clausen refers to is the science, technology, engineering, art and math students used to create and program images for the panels. All of these are necessary parts for making the robot look like a billboard.

The robot is assisted during the game by four members of the team, known as the drive team. This team is made up of John Pugsley, driver, Moriah Schlenker, operator, Clausen, pilot and Jessica Van Ness, human player. The drive team and their robot work together with two other teams on an alliance to outscore another alliance made of another trio of robots and their drive teams.

The drive team is busy both during matches and between them. “I am in charge of moving the robot around on the field and the rest of the day I’m in the pits fixing and improving the robot and planning strategy for further matches,” Pugsley explained about the responsibilities of the driver.

Schlenker said she is in charge of running the communications mechanisms for the robot and communicating with Pugsley so that they can work in sync to operate the robot. She also plans with Pugsley and other drive team members as well as the drive coach, Mike Koch, about the team’s goals for each match.

The team is still busy at their shop in Madjax Makers Force in downtown Muncie making improvements to their robot in anticipation of the upcoming state championships. Schlenker said the team hopes “that we will fix bugs in the robot and get the programming ready for more strategic scoring.”

During their first district competition in St. Joseph, Indiana, March 11-12, the team ranked 4th after qualification matches and was captain of the third seed alliance. Although the team was eliminated in the quarter finals at this event, they won the prestigious Excellence in Engineering Award sponsored by Delphi for the overall design of their robot and the team’s technical expertise.

The team is hopeful of winning one of the ten spots allotted to Indiana teams to compete in the FIRST World Championships in St. Louis, April 26-29. However, they need help with registration and travel fees for both this event and the state championship. Please consider helping the team through a donation to the team’s Go Fund Me page: https://www.gofundme.com/muncie-in-robotics-victory-tour.