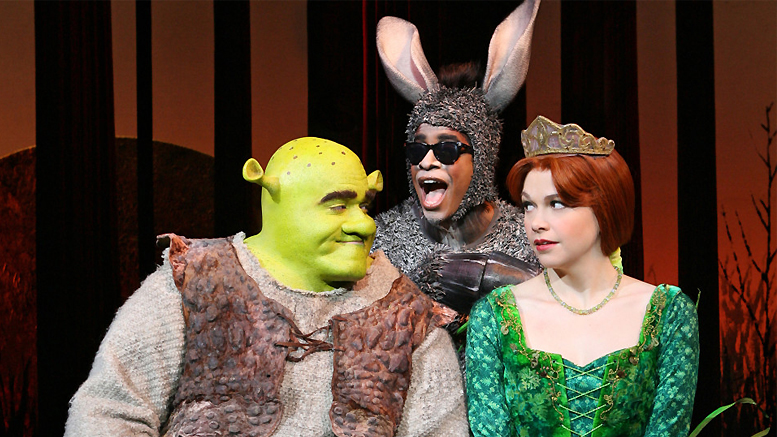 Sutton Foster originated the role of Princess Fiona in the Broadway version of Shrek the Musical, which debuted in 2008. Foster said what she loves most about Shrek the Musical is how it has an enormous heart and is all about friendships and relationships. Photo by: Joan Marcus

MUNCIE, Ind. – “Shrek the Musical,” the story of a reclusive green ogre and his adventures in a land full of fairy tale characters, opens at Ball State University at 7:30 p.m. March 31 and April 1-2 and 4-8, with a 2:30 p.m. matinee on April 2, 8 and 9. Tickets are available at the University Theatre box office and online.

Based on William Steig’s children’s book “Shrek!” and the 2001 Oscar-winning animated film, “Shrek the Musical” is one of the Department of Theatre and Dance’s most ambitious projects, said Bill Jenkins, who is co-directing the musical with Tony Award-winning actress Sutton Foster, a friend of the university for more than a decade.

“We’ve never put on a show quite as demanding as this,” said Jenkins, chairperson of the department. “In terms of design elements alone, it’s our biggest, most involved production.”

To help Ball State students prepare for the story about the anti-social Shrek who, with the help of a few new friends, falls for Princess Fiona, Foster visited campus for a week in mid-February.

Amanda Walker, who plays Fiona, expected to be intimidated working with Foster, who originated the role in the 2008 Broadway production of “Shrek the Musical.”

“I thought I’d be star struck but I actually came to think of Sutton as a friend,” the sophomore musical theater major said. “She obviously cares so much about us and that means a lot. She’s also a phenomenal teacher. Sometimes people with such talent can’t explain how they do things, but she knew how to guide us and help us get to a place of playful comfort.”

The musical’s endearing humor, familiar to fans of the cartoon, captured the hearts of its other leads, juniors Reagan Pender as Shrek and Tony Weatherington as Donkey.

“Donkey is so full of energy that this role is demanding. It requires a lot of stamina to make it through all the songs,” Weatherington said. “It’s fun energy, but I’ve got to keep it at a 10.”

Foster said what she loves most about “Shrek the Musical” is how it “has an enormous heart and is all about friendships and relationships.”

Walker said the cast realized working with the actress was a once-in-a-lifetime experience. “She helped us find things in those characters that I don’t know that we would’ve found without her.”

Tickets for “Shrek the Musical” cost $18 for the general public and $15 for students, staff, faculty and senior citizens. New this year for University Theatre Mainstage productions is a ticket price of $10 for children 12 and under. Visit the University Theatre Box Office, open one hour before performances, and also from noon to 5 p.m. Monday through Friday. Contact the box office at 765-285-8749 or visit bsu.edu/theatre for more information.