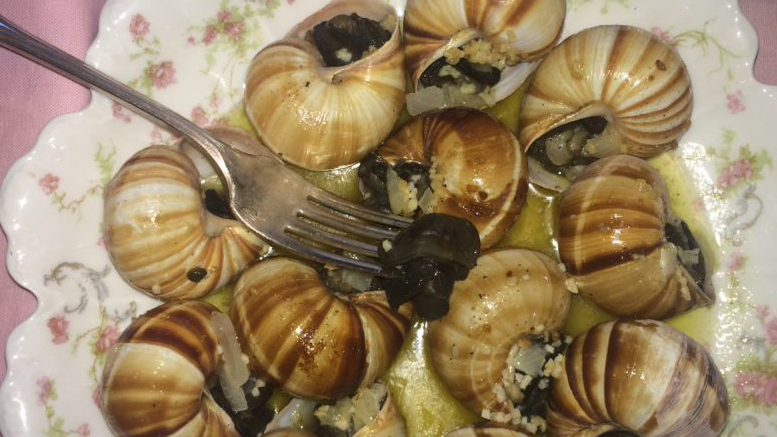 Escargot is better known as snails. Photo by: Nancy Carlson

You know, when dinnertime rolls around, nothing “hits the spot” like some delicious snails.

I didn’t always feel this way, though.

Like, take way back before my culinary awakening to snails  – meaning two whole weeks ago. At that time, my opinion of eating snails was best represented by Steve Martin’s confrontation with the waiter in his movie “The Jerk.” He and Bernadette Peters are dining in a fancy restaurant. Then he spots something disgusting.

“Waiter!” he rants, while she looks away, trying not to scream her curly-haired head off. “There are snails on her plate!”

This being my introduction to escargot, I remember sympathizing with her, thinking, “You go, Bernadette! I wouldn’t wanna eat a bunch of stupid snails either.”

After all, having encountered a fair number of snails in woods and swamps as a kid, I found them slimy, squishy and gross. Oh sure, attitudes toward snails are changing. Believe it or not, the ones pictured above were bought at Walmart. But back in the day, solidly middle-class American families just didn’t eat snails. Not once at the dinner table did I ever hear Dad tell Mom, “Great snails, honey,” or “Could you pass the snails, dear?” or warn us kids, “No dessert until you eat your snails!”

It’s also why at birthday parties, you never heard excited children chorusing, “I scream! You scream! We all scream for snails!”

No, we had meatloaf. Meatballs. Spaghetti. Chili. Sloppy Joes. These were all essentially the very same thing, the only difference being the form in which they were presented. And we ate them happily.

Still, at various culinary stops along the road of life, one slowly begins acquiring tastes for slightly more exotic fare. Raw oysters were a pleasant surprise, their hint-of-ocean aura  coupled with the convenient fact that if you tired of chewing them, they’d just sort of slither down your throat on their own.

Nearly rare ahi tuna was another surprise, the flavor of that firm pink flesh approaching the sublime. Taste-wise, Starkist’s Charlie the Tuna didn’t know the half of it.

Then there was that first crunchy grasshopper taco down in Nashville last year, which didn’t thrill me, but didn’t kill me, either.

But snails? Escargot? Somehow they remained off my personal menu until a recent vacation encounter in a nice Italian restaurant down South.  Watching an episode of the Travel Channel’s “Bizarre Foods” had inspired me to channel my inner Gordon Zimmern, the host who will eat literally anything that isn’t Spam. Presented a mess of freshly gathered snails, he was hungrily licking his lips while using a toothpick to pry the wet and wriggly little fellas from their protective shells.

Nearby I think somebody was sautéing them, but not necessarily. It’d all be the same to Zimmern, a guy faithful viewers have watched eat goat eyeballs, beating snake hearts and even intestines with, as he so fetchingly puts it, “one in the chamber,” meaning …

Anyway, this particular evening my snails – I mean, escargot – arrived sharing a small oval plate with slices of artichoke hearts, pearl onions, and a buttery, garlicky, yet slightly citrusy broth that was perfect for dipping bread chunks into.

The snails? Dark and round as musket balls, they took a little chewing. Forking them into my face was good for my gustatory spirit, though, as well as my sense of worldliness.

See, one table over, and this is no lie, a haughty matronly woman was going on to her spellbound table-mates about Hoosiers, unaware that two actual ones were seated nearby.  The gist of her blathering was what simple rubes we are.

Frankly, I was tempted to start whistling “Back Home Again in Indiana” just to get her attention, then make some ostentatious comment to Nan like, “Wow, these snails are the divinest I’ve ever slurped.”

You know, just to show her how sophisticated I am.

But I didn’t, Nan having a weak stomach for things like snails, grasshoppers and any other food that looks like it did when it was slithering, hopping or walking around. Consequently, she was pulling a Bernadette Peters on me, determinedly looking away from my plate of snails. That was all right though; the woman at the next table had shut up by then.

But they tasted pretty good, for snails.

OK, so for this Muncie Journal column on escargot,  I need my photographer – my wife, Nancy – to buy me some snails for the accompanying photograph. For the record, believe it or not, snails are available at Walmart, of all places. Anyway, Nan’s not a snail person, but she dutifully buys and prepares them, then shoots my snail art Sunday. Lunchtime on Monday she holds her nose and pops the leftover snails into the microwave to warm up, but sort of loses track of the time they’re in there.

I know this because suddenly she looses a bloodcurdling scream as, with a look of abject horror, she flings open the microwave door. You know how those colorful marshmallow Peeps candies grow to twice their size when you microwave them? Turns out snails sort of do the same thing. At least that’s how Nan describes the sick scene she witnesses in the microwave, which has now become littered with snail chunks.

Last time I saw her, she was grimacing with disgust while sponging the exploded snail residue from our microwave, and was not a happy camper. Meanwhile, I was composing this entertaining post.

“My wife,” as the appreciative guy in the old TV ads used to say. “I think I’ll keep her.” Whether she’ll return the favor is anybody’s guess.