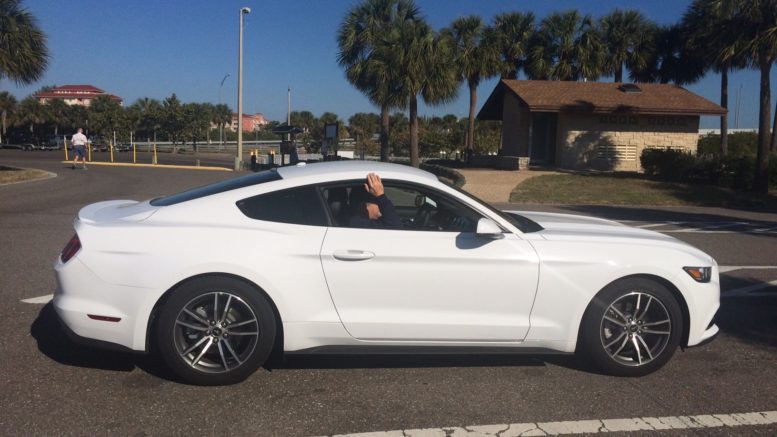 Once upon a time I had a sweet ride. And I do mean ride.

This started off as one of those bad news/good news/bad news things. Having recently flown into Clearwater, FL, for vacation, Nan went to where our car rental place had reserved us a vehicle, only to learn they hadn’t reserved us a vehicle and, furthermore, had no vehicles available.

“Well, shoot!” I exclaimed, or words to that effect.

But it being late and we being tired and my legs working rather wonkily these days, Nan set me outside the terminal and hurried to another rental agency where, it turned out, there was one car left.

Twenty minutes later, she rumbled up in our brand-new, beefy-little, rip-snorting Mustang, which the car rental agency had kindly agreed to part with for seven whole days for a mere $700.

Now, because she had signed all the paperwork, and my legs being temporarily unreliable, I reluctantly agreed that she be the Mustang’s designated driver. Still, as a 1983 graduate of Skip Barber’s Formula Ford road-racing school, I wasn’t happy about this challenge to my manhood.

The experience, however, taught me something.

Yeah, maybe. But mostly, how to ride shotgun in a Mustang your wife is driving without looking like some kind of wimp.

My first advice would be to spit a lot. Just ask baseball players. Apparently nothing looks more manly than letting some juicy goobers fly. So if some dude pulls up alongside and gives you a look that asks, “Hey, weeny? What’cha doing riding shotgun while your lady drives that bad boy?” just pucker up and splurt.

A couple words of caution though. Don’t actually splurt, er, spit on the guy’s car unless – as is potentially the problem in my own case – you want your walker wrapped around your neck. On the other hand, also don’t try this if you are not a competent spitter. Remember, nothing looks less manly than diligently working up a spit, launching it with all your might, then watching it drip lamely off your own side-view mirror.

But enough about spit …

Facial expressions also play a key role in convincing fellow male drivers you are not some wuss being hauled around in a Mustang by your wife, even though you are.

Your most common expression must be one of unmitigated disgust, one that clearly conveys the message that you can’t believe you agreed to give your little lady a driving lesson in your butt-kicking Mustang.

I would suggest imagining you are rushing to get the lawn mowed before a big summer storm rolls in, while at the same time suffering a severe case of heat rash in a place Down Under that is actually nowhere near Australia.

Yes, that look should do it.

On the other hand, nobody’s in a bad mood all the time, so for realism’s sake you should take a nuanced approach to facially expressing your dissatisfaction. Like, say the guy pulling up alongside you at the stoplight casts a look of pity your way, like you must be some kind of unfortunate bozo to be riding shotgun. You must greet this look with a wan smile while raising your eyebrows and shaking your head in good natured resignation.

You might even chuckle apologetically, roll your eyes, then exasperatedly mouth the words, “What can I say … dames.”

It is vital, however, that the words, “What can I say … dames,” not actually pass your lips, lest your lady hear them and leave you at the roadside waiting for a MITS bus while she takes the Mustang shopping at Kohl’s.

Finally, as she gets used to driving this muscle car, you must not squeal. When it comes to asserting your manliness, or lack thereof, squealing is a dead giveaway. Leave squealing to the tires.

I figured this out too late, meaning about 20 minutes after Nan showed up outside the airport terminal with our Mustang. At first she was nervously going “oops,” and “eek” at its brute power every time she gently nudged the accelerator. But by the time she got to our hotel, she was laughing maniacally as she fishtailed around corners.

I, alas, was squealing. There went my man card.

Now Nan wants to buy a Mustang, a Camaro or a Charger, while I just want something with lots of airbags.