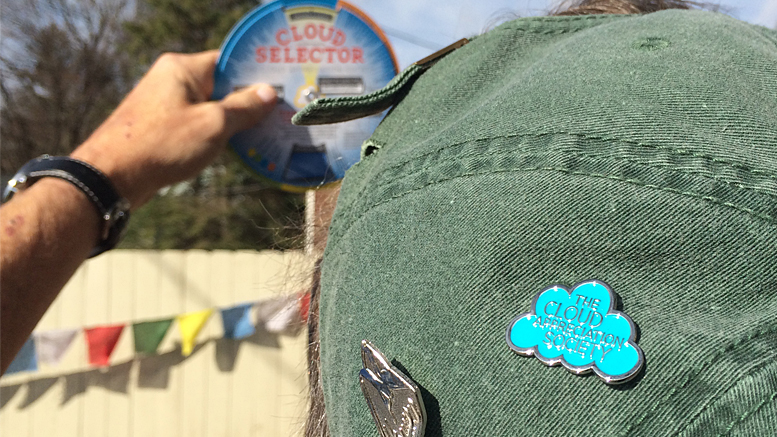 Checking out clouds with my Cloud Selector. Photo by: Nancy Carlson

I love watching them form and drift and, alas, dissipate. And who doesn’t love how they dress up the sky during a spectacular sunset? What’s more, I’m told the same glorious thing sometimes occurs at sunrise, though being retired now, I wouldn’t know from personal experience.

Cloudless skies, in turn, bore me.

Recently I took my love of clouds to a new level by joining The Cloud Appreciation Society, which is a real thing. Just the other day the mailman delivered my official pin and framable membership certificate, which noted my identification number is 42702.

My membership packet came from top-cloud-guy Gavin Pretor-Pinney, whose identification number is 0001.

Though we haven’t met, if I ever run into Gavin at a soirée of The Cloud Appreciation Society, I will recognize him immediately. That’s because, in lieu of stick-on name tags, members attending society functions are encouraged to write their numbers on their foreheads.

However, chances are slim that I will ever join Gavin quaffing a beer at The Fickle Peach or wolfing down a 16-inch Supreme with double-cheese at my favorite Pizza King. The society’s home base is in the United Kingdom, specifically Somerset. Actually, I kind of figured it was British, even before I saw that membership costs were listed in pounds instead of dollars. Its whole schtick struck me as so charming, it just had to be British.

In noting that, I also wonder how something as ethereally centered as The Cloud Appreciation Society goes over – pun intended – here in the U.S. with our full-speed-ahead, balls-to-the-walls cultural sensibilities. But who knows? Maybe better than I suspect. Not long ago I saw a television story about an American society whose enthusiastic members, all men by the look of them, collect washing machines.

Weirdos, for sure, but sort of charming weirdos.

Anyway, my love of clouds is rooted in a lifelong fascination with airplanes. While I spent many more years not flying them than flying them, I long ago earned a commercial pilot’s license for single-engine airplanes and later for gliders. The latter rating was a particular joy for a cloud junkie, since intimate interactions with puffball cumulus clouds are vital to finding the thermals glider pilots employ in soaring.

With those wonderful days likely behind me, clouds still please me, even when viewed from  terra firma.

Much as I admire my membership certificate and official pin, the coolest thing that came in my packet was my Cloud Selector.  A dialable circular device about six inches in diameter, it helps you identify clouds. On one side there are the familiar ones. Cirrus. Stratus. And, of course, there’s that spawner of countless Hoosier tornados and scourge of mobile-home parks, the cumulonimbus.

The other side of the Selector does the same for sub-groups of clouds, ones it’s quite likely you’ve never seen or even heard about. You’ll find the unbelievable roll cloud pictured, looking otherworldly as it hovers low over the ground like God’s own gigantic gray burrito. Then there’s the Kelvin-Helmholtz cloud, a rare type that looks like an artist’s rendering of breaking waves.

And there’s the aptly-named mamma cloud, of all things. Described as having “hanging lobes,”  the Cloud Selector goes on to memorably note its “Udder-like pouches beneath a cloud layer.”

Cloud udders! You find these amazing things and more.

Of course, as already hinted, there might be a sizable portion of the population that doesn’t find such natural beauties fascinating. Nan and I were parked on the stunning south rim of the Grand Canyon once when a teenager came tearing out of a park lodge, joyfully screaming to his parents, “They’ve got video games!” Oh, well. That’s fine. Besides, it’s probably the practical people who truly make the world go around.

The rest of us are the comic relief.

But being an unrepentant cloud-gazer, I feel a real affinity for The Cloud Appreciation Society and its founder, Gavin, who every day emails me a picture of a cool cloud to ponder, admire and even expound on its awesomeness.

“Holy crap,” I usually mutter, with a startling lack of eloquence.

Or, as no less a writer than Ralph Waldo Emerson noted in a quote that graces my Cloud Selector, “The sky is the daily bread of the eyes.”